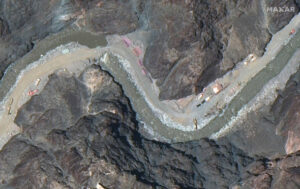 This June 22, 2020, satellite image provided by Maxar Technologies shows a road under construction near the Line of Actual Control, the border between India and China. Chinese and Indian military commanders agreed to disengage their forces in the disputed area of the Himalayas following a clash that left at least 20 soldiers dead, both countries said. The commanders reached the agreement Monday, June 22, 2020 in their first meeting since the June 15 confrontation, the countries said. (Maxar Technologies via AP)