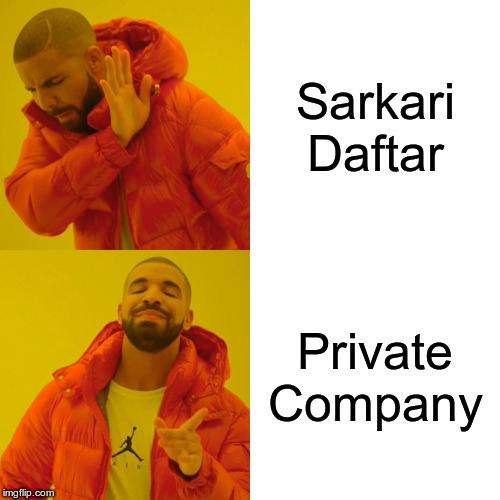 Call a person sarkari in India and see what reaction you get. It is no secret that dealing with the Government is an ominous day in an Indian’s life. Dealing with the Sarkar has never been a pleasant experience and nobody likes a colleague or a friend who has a sarkari deposition to work or life. Which is not so when it comes to dealing with the private sector. Sure, there are bad apples, but you have to option to choose a more professional experience. That’s because the government consistently underperforms the private sector when it comes to results. Airtel and Vodafone make tons of profit while BSNL’s non-existent service has been running on life support graciously funded our beloved taxpayers. The examples are endless. Most people know government is less efficient but can’t explain why. Let’s examine the reasons.

Simply put, to get the most out of limited national resources, government should only be in charge of services that can’t or won’t be provided in the private sector (essentially, nothing). Throughout history, you can almost plot a perfectly inverse relationship between level of central government control and national prosperity. It’s why socialist and communist nations inevitably struggle economically while free market ones thrive.

“The best minds are not in government. If any were, business would hire them away.” — Ronald Reagan