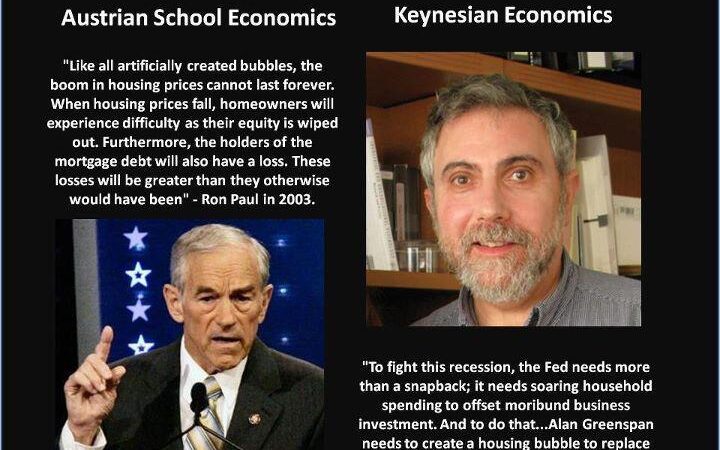 By Lawrence Reed on Fee.org (extracts)

Is there such a thing as “bad economics?” You bet there is, just as surely as there is good plumbing and bad plumbing.

It may be an oversimplification, but I believe that the essence of”bad economics” can be distilled into the following seven fallacies. Each of them is a pitfall which the good economist will faithfully bypass.

Examples of collective terms are “society,” “community,” “nation,” “class,” and “us.” The important thing to remember is that they are abstractions, figments of the imagination, not living, breathing, thinking, and acting entities. The fallacy involved here is presuming that a collective is, in fact, a living, breathing, thinking, and acting entity.

The good economist recognizes that the only living, breathing, thinking, and acting entity is the individual. The source of all human action is the individual. Others may acquiesce in one’s action or even participate, but everything which occurs as a consequence can be traced to particular, identifiable individuals.

Consider this: could there even be an abstraction called “society” if all individuals disappeared? Obviously not. A collective term, in other words, has no existence in reality independent of the specific persons which comprise it.

It is absolutely essential to determine origins and responsibility and even cause and effect that economists avoid the fallacy of collective terms. One who does not will bog down in horrendous generalizations. He will assign credit or blame to non-existent entities. He will ignore the very real actions (individual actions) going on in the dynamic world around him. He may even speak of “the economy” almost as if it were a big man who plays tennis and eats corn flakes for breakfast.

2. The fallacy of composition.

This error also involves individuals. It holds that what is true for one individual will be true for all others.

The example has often been given of one who stands up during a football game. True, he will be able to see better, but if everyone else stands up too, the view of many individual spectators will probably worsen.

Many an economics textbook speaks of the farmer who is better off because he has a bumper crop but may not be better off if every farmer has one. This suggests a widespread recognition of the fallacy of composition, yet it is a fact that the error still abounds in many places.

The mercantilists of the 1600s raised this error to the pinnacle of national policy. Always bent upon heaping up hoards of gold and silver, they made war on their neighbors and looted their treasures. If England was richer than France, it was, according to the mercantilists, because England had more precious metals in its possession, which usually meant in the king’s coffers.

It was Adam Smith, in The Wealth of Nations, who exploded this silly notion. A people are prosperous to the extent they possess goods and services, not money, Smith declared. All the money in the world—paper or metallic—will still leave one starving if goods and services are not available.

The “money is wealth” error is the affliction of the currency crank. From John Law to John Maynard Keynes, great populations have hyperinflated themselves to ruin in pursuit of this illusion. Even today we hear cries of “we need more money” as the government’s monetary authorities crank it out at double digit rates.

The good economist will recognize that money creation is no short-cut to wealth. Only the production of valued goods and services in a market which reflects the consumer’s wishes can relieve poverty and promote prosperity.

4. The fallacy of production for its own sake.

Although production is essential to consumption, let’s not put the proverbial cart before the horse. We produce in order that we may consume, not the other way around.

A bad economist who falls prey to this ancient fallacy is like the fabled pharaoh who thought pyramid-building was healthy in and of itself; or the politician who promotes leaf-raking where there are no leaves to be raked, just to keep people “busy.”

It seems that whenever an industry gets in trouble, some people cry that it must be preserved “at all costs.” They would pour millions or billions of dollars in subsidies on the industry to prevent the market’s verdict from being heard. The bad economist will join the chorus and ignore the deleterious impact that would befall the consumer.

The good economist, on the other hand, does not confuse ends with means. He understands that production is important only because consumption is even more so.

Want an example of this fallacy at work? How about the many proposals to prevent consumers from buying Japanese autos in order to “protect” the American auto industry from competition?

The Garden of Eden is a thing of the distant past yet some people (yes, even some economists) occasionally think and act as if economic goods can come with no cost attached. Milton Friedman is one economist who has warned repeatedly, however, that “there is no such thing as a free lunch!”

Every “something for nothing” scheme and most “get rich quick” plans have some element of this fallacy in them. Let there be no mistake about this: if economics is involved, someone pays!

An important note here regards government expenditures. The good economist understands that government, by its very nature, cannot give except what it first takes. A “free” park for Midland, Michigan is a park which millions of taxpaying Americans (including Midlanders) actually do pay for.

A friend of mine once told me that all one needs to know about economics is “What is it going to cost and who is going to pay for it?” That little nutshell carries a kernel of advice for the economist: don’t be superficial in your thinking!

6. The fallacy of the short run.

In a sense, this fallacy is a summary of the previous five.

Politicians seeking to win the next election frequently support policies which generate short- run benefits at the expense of future costs. It is a shame that they sometimes carry the endorsement of economists who should know better.

The good economist does not suffer from tunnel vision or shortsightedness. The time span he considers is long and elastic, not short and fixed.

7. The fallacy of economics by coercion.

Two hundred years after Adam Smith, some economists still have not learned to apply basic principles of human nature. These economists speak of “increasing output” but prescribe the stick rather than the carrot to get the job done.

Humans are social beings who progress if they cooperate with one another. Cooperation implies a climate of freedom for each individual human being to peacefully pursue his own self- interest without fear of reprisal. Put a human in a zoo or in a strait jacket and his creative ener gies dissipate.

Why did Thomas Edison invent the light bulb? It was not because some planner ordered him to!

Take a look around the world today and you see the point I am driving at. Compare North Korea with South Korea, Red China with Taiwan or Hong Kong, or East Germany with West Germany.

One would think, with such overwhelming evidence against the record of coercion, that coercion would have few adherents. Yet there are many economists here and abroad who cry for nationalization of industry, wage and price controls, confiscatory taxation, and even outright abolition of private property. One prominent former U.S. senator declared that “what this country needs is an army, navy, and air force in the economy.”

Well, there you have it—not the final answer to confusion in economics, but at least a start. I for one am convinced that good economics is more than possible. It is imperative, and achieving it begins with the knowledge of what bad economics is all about.