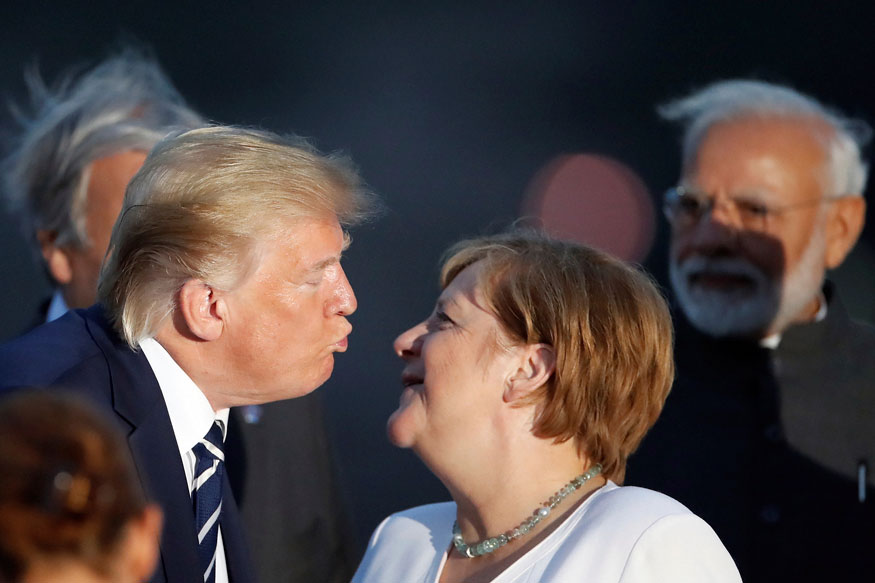 [Trump and Angela Merkl in smooch mode; Modi looks on]

With every passing oped of his, it becomes more difficult to take Ram Madhav, General Secretary of the ruling BJP and sometime RSS pracharak, seriously. The upside, however, is these pieces provide no end of amusement. One can see just how desperate Madhav is to impress Narendra Modi with his flattery and supposed profundity (as reflected in quotes from here and there). His articles are a baffling mix of disjointedness and incoherence, spiked with random mentions of people, bits of history, and recent developments. Taken together they make no sense. For instance, his latest — “India can collaborate with the US and Germany to mould a new world order” [https://indianexpress.com/article/opinion/columns/coronavirus-global-lockdown-exit-strategy-ram-madhav-6385391/].

In this piece may be found references to Trump, Modi’s “democratic activism” — whatever that is (because there is no explanation), coronavirus, Niall Ferguson, Hitler, nationalism, ultra-nationalism, World War Two, Mao, Dengxiaoping, China, modern day Germany, and God knows what else, arrayed almost in bullet-points with no connecting tissue and constituting a melange that does not support his conclusion, which is that “In the unfolding new world order, India, along with countries like America and Germany, can play a pivotal role in building a world based on ‘human-centric development cooperation’ as suggested by Modi. It is time for a new Atlantic Charter: Environment, healthcare, technology and democratic liberalism can be its foundations.”

For a geopolitical grouping to amount to much, it has to be underpinned by geographic logic and the imperative to balance power. Consider any strategy or alliance for tactical or strategic reasons, for short-term gain or for the long haul, and one discovers two factors at work — geographic considerations and the desire to balance power against the dominant or would-be dominant state. Both these factors aligning is when a coalition or geopolitical strategy achieves success. 16th Century onwards, Britain practiced its ‘continental strategy’ of preventing any single continental power from attaining dominance. In pursuit of this strategy, Britain enforced a naval blockade of Napoleonic France in 1804, responding to which Napoleon enforced a ban in 1806 on European powers trading with Britain. Otto von Bismarck, who forcibly amalgamated the Germanic states in Central Europe into a single powerful entity, created an alliance system crowned by the 1882 ‘Triple Alliance’ featuring Germany, the Austro-Hungarian Empire and Italy to isolate chief rival, France. Imperial Russia, France, and Britain building on the 1894 Franco-Russian accord forged the 1904 ‘Triple Entente’ to hem in an ambitious Germany. Britain and Japan turned treaty allies in the first 2 decades of the 20th Century ostensibly to fight off Imperial Russia in Asia but in actuality to protect their colonial interests in China and Korea. In the throes of revolution, Russia signed the 1918 Brest-Litovsk Treaty with the German-led bloc of Central European powers to stabilize its borders. Some 20 years later, in August 1939, a month before the onset of the Second World war, Germany and Soviet Russia signed the Ribbentrop-Molotov accord to carve up Poland. Post-1945, the so-called “Atlantic Charter” (that Madhav bungs in for no good reason in his piece) resulted in NATO, reacting to which the USSR formed the Warsaw Pact consolidating, in the process, the US and Soviet spheres of influence in Europe. To firm up Communist solidarity and the control of the bulk of the Eurasian landmass, the Soviet Union closed in with Mao’s China to present a solid front to the West generally, and to the US and its allies in the Pacific specifically.

By what geopolitical or geostrategic metric and in what conceivable way does a grouping in the present day of a receding America, a much reduced Central European state, Germany, with no great independent military capability to speak of, and India, a country that has over time relentlessly marginalized itself to a point where it does not even pull its weight in its own backyard, leave alone assert itself as the primary rimland power in Asia, in a position to shape the world order as envisaged by Madhav? There’s, moreover, obvious natural affinity of race, culture, religion, etc., between the US and Germany, an affinity in no way shared by either of these countries with India.

Just how much of an interloper India is in a US-European concert is depicted starkly in the pic above where Modi and, by extension, India stand forlornly, watching the American and German leaders whoop it up even though German Chancellor Angela Merkl can barely conceal her contempt for Trump and thinks the US an unreliable ally, and Trump has labelled Merkl’s policies “insane” and has threatened to withdraw military support for Germany. There is nevertheless much there in the long term, Trump notwithstanding, for a new Atlantic Charter. But how can India expect to muscle in on this US-European partnership, considering there’s almost no serious overlap in the strategic interests of the US and Germany on the one hand and India on the other hand, unless one counts as common interest a peaceful global security milieu and a liberal trade regime which everybody craves, including the arch-global disruptor of the current order, China?

So the question of these three states getting together to construct a new international system does not arise. Also because there’s the inconvenient fact of what it is the three countries bring to the table. The US comes in with unmatched military and economic power, Germany pitches in as the European economic behemoth able to swing the European Union behind it. In comparison, Modi and India can boast of little more than the former’s flatulent ‘vishwa guru’ conceit (that Madhav predictably waxes on). Delhi, with a failing Indian economy and constricted strategic vision and policies and, therefore, limited military clout, cannot even get its immediate neighbours to support it.

In the circumstances, pray, what can India contribute to ‘human-centric development cooperation’? The US and Germany, having achieved by their own effort high living standards, have excelled in human centric development; in comparison India has stumbled through 70-odd years of socialist development that Modi in his time in office has done nothing institutionally to correct, other than ring in cosmetic changes in the functioning of a still corrupt, inefficient, wasteful, and ineffective apparatus of government that persists from socialist times but produces very little governance. So, does Madhav’s “human-centric development cooperation” not seem like a plea for alms, an artful dressing up of the beggar’s bowl?

Wanting to capitalize on the imagery involving the PM, on Modi’s flying around hither and thither, visiting every country under the sun, and conferring with the high and mighty in international meets — the sort of activity the corona pandemic has shut down, Madhav conjures up, if only for the sake of op-eds, alliances out of thin air, fueled by nothing more, it’d appear, than passing whimsy! Damn good reason to deny him the role he apparently seeks for himself as some sort of intellectual vanguard, God forbid, for the PMO and the BJP government, unless Modi wants to further trivialize himself and India in the eyes of hardened professionals crafting foreign policies elsewhere in the world.

Permalink : From the source of wonky ideas, another one!