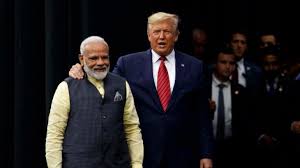 A lot of things were wrong, or went wrong, with the Houston-do starring Narendra Modi and Donald Trump. Not that anyone here noticed them, everybody being too busy singing hosannas for the budding Trump-Modi camaraderie on display.

Let’s start with the pic above: See Trump’s condescending, proprietory, hand on Modi’s shoulder? No self-respecting leader — unless he heads a rank small and inconsequential country and hence has no choice — would allow a big power leader to shown him up in an obvious sort of way as junior partner (or, should that be pardner in Texan lingo?).

It reminds me of the US-Philippine war (1899-1902) that the US waged against the freedom movement led by Emilio Aguinaldo after Spain ceded that Asian colony to America vide the 1898 Treaty of Paris. That military campaign was justified by Washington as “saving our little brown brother” and in terms of a programme of “benevolent assimilation” in the American sphere. The publicity photos and posters distributed by the US military from its headquarters, in Manila and outlying areas, in fact featured two standing figures — one a big, white, smiling American with a hand on the shoulder of the smaller brown befuddled Filipino.

True, Modi far from befuddled rejoiced in this Trumpian display of insulting physical familiarity on himself with his prior record of trademark hugs and embraces that in his first term startled foreign leaders but is now shrugged off as a hazard of the trade by them. He went so far to curry favour with Trump as to offer his own successful election campaign slogan to suit the US President in his upcoming re-election campaign — ab ki baar Trump sarkar!

Thus Modi, in a small way, sought to influence American people to vote Trump. With the Impeachment proceedings underway against trump in the US Congress and the likelihood of Russia assisting Trump to get elected in 2016 with offensive cyber strategy of fake news hurtful of Hillary Clinton’s chances using social media being investigated threadbare, Modi’s enthusiasm in pitching Trump to US voters could come in for some scrutiny. Especially because a couple of Democratic Party presidential contenders, including Bernie Sanders, have already hit out at India’s treatment of Kashmiris, etc.

Even if no Congressman takes notice of Modi’s attempts at interference in the internal affairs of the US, the fact that such a thing happened formally and openly could be a precedent for legitimating such influence peddling by foreign powers in Indian elections. Is is too much of a stretch to see a re-elected Trump mosey over to India on a state visit to return the favour and try and secure a 3rd term for Modi in 2024? Indeed, what was until now covert activity — the US routinely provided election funds to Right-thinking politicians while Moscow filled the Indian Communist parties’ coffers and, emerged as a principal funder of Indira Gandhi’s Congress party in the early 1970s. But such help was usually hush-hush except hereafter foreign entities will feel less inhibited in this regard. It is a ripple effect Modi did not ponder before becoming a carnival barker for Trump in Houston.

All this would be fine if the entire Houston tamasha was perceived as a bit of escapist political theatre and dismissed as so much diplomatic dross. Except, Modi and his government seems inclined to read more into the optics of the event than is warranted. The truth is all the posing, sweet talking and hand-in-hand “victory” lapping by Trump joining with Modi, comprised just a contingent ploy by Trump to be nice to the foreign leader he was sharing the moment with. However, Modi, Jaishankar & Company deliberately or otherwise misread and misrepresented this whole affair.

Thus, the Modi government’s overjoyed take on Trump’s voicing his antipathy towards “radical Islamic terrorism” as an endorsement of Modi’s Kashmir related-actions was falsified soon enough. When Trump was asked whether he sided with India against Pakistan when he talked of Islamic terrorism he stated that he was referring to Iran and, disingenuously, that that was the country he thought Modi was alluding to as well!!

Now switch over to Trump’s meeting Imran in New York yesterday. Sure, Imran didn’t get much traction from his nonsensical nuclear war-mongering spiel. It afforded the US president an opportunity to publicly revive his offer of mediation on Kashmir; but he failed to bring up the matter of Islamic terrorism because, well, Islamabad holds the Afghanistan card.

So, it doesn’t seem Modi got more out of Trump than Imran did with lot less effort and and near zero expenditure of money (versus millions of albeit NRI dollars for staging the show at the NRG Stadium in Houston). But there was a difference. Modi gave a lot to receive very little from Trump. For instance, as anticipated in my previous blog he has compromised on allowing US agricultural commodities to be sold in the Indian market to the detriment of the beleaguered Indian farmer. There may even be a provision permitting the imports into India of dairy items at the cost to the country’s dairy industry. And, of course, Delhi will be hard put to resist the American push the antiquated F-16 under the guise of transferring military technology and, God alone knows, what other dated technologies at the expense of the infant indigenous defence industry.

Is this fair exchange — Trump’s jollying Modi around for the emptying of the Indian treasury, and hollowing of Indian agricultural and industrial economy?