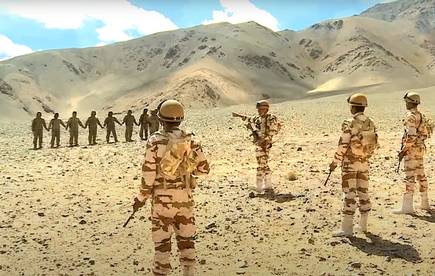 [Confrontation in the high desert]

What’s the first, most basic, thing the Indian army should have done once the Border Roads Organization (BRO) began constructing the Siachen lifeline and access road to the strategic Karakoram Pass at the confluence of India and China — the Karakoram Pass-Daulat Beg Oldi-Murgo-Dubruk-Tangtse highway? Why, secure the heights on the approaches to the proposed Karakoram-Tangtse route on the Galwan, Chang-chenmo, and Shyok rivers, of course! Was this done? No! And why weren’t such basic precautionary protection measures taken?

The latest territorial grab by China has gone unaddressed by the army and is particularly egregious in the light of a similar earlier mistake made in Kargil. Except then following the intense 1999 “border war”, the Kargil heights were retaken from the Pakistan army’s unit that had sneaked in during the previous winter months when the Indian army had affected a seasonal withdrawal from the ridge. That war cost the country an awful lot in terms of lives, and military and financial resources. If the army went to war to recover the Kargil heights because otherwise the supply line to Leh would be imperilled, why did it do nothing preemptively to protect the border road, and why is it not enthused about forcibly evicting the PLA from the Galwan, in particular, to guarantee that Indian access to the Siachen Glacier and to the Karakoram Pass remains unimpeded in perpetuity?

Study the map below to identify what lies where.

The army apparently learned nothing from its Kargil experience, because it is being replayed today on the Ladakh front. Far from moving expeditiously and in tandem with the BRO construction to occupy the high points on the mountainous terrain adjoining the proposed highway, XIV Corps and Army HQrs failed to even heed, leave alone react, to the imagery generated by Indian satellites available for a long time now showing PLA construction crews building the infrastructure in the Galwan Valley, for instance. So now India is faced with the entrenched Chinese positions from where PLA can at any time interdict the Siachen supply line and otherwise sever the lines of communications to the Karakoram Pass.

The same do nothingness informed the Indian army’s inaction further south in the terrain stretching from Finger 4 to Finger 8 on the northern shore of the Pangong Lake; this even though the process of the PLA units ensconcing themselves there, like on the Galwan, was no doubt flagged early by the Delhi-based DIPAC (Defence Image Processing and Analysis Centre). By May this year when the army finally stirred into action, it was too late for it to do anything. Because unlike in Kargil, the army was unprepared for and unwilling to undertake hard action. Hence, the army neither advised, nor sought approval, from the Modi government to initiate military operations to rid the Galwan and Pangong Tso heights of the aggressor PLA units. An even worse spin in the context of the availability of the satellite imagery intelligence is that the army knew all along about the PLA build-up to dominate the heights but did not have the stomach for a fight, and so did nothing.

It may be argued by the army that preemptive action of the kind here outlined to occupy the Galwan heights and the areas Finger 4 to Finger 8, on the Pangong would have been a hugely arduous task because it would have involved moving considerable military mass to logistically difficult-to-maintain mountain sites. Except the army has been sustaining and supplying a force deployed in the still more inaccessible Siachen post at a higher altitude for nearly 40 years now. And there are Indian army units continuously undergoing acclamatization for rotational posting on the glacier. So, the army had both the wherewithal and the trained forces to occupy the mountain tops now in Chinese custody.

At the heart of the issue is the apparent unwillingness of the army and government to take actions, whether preemptive or post-PLA ingress, that could escalate into war with China, whence the Indian government and army brass’ inclination from the beginning to rely on diplomacy. Whatever the policy deficiencies of the panda-huggers in Modi’s PMO and the MEA, active monitoring of the Line of Actual Control, being proactive in the field, and making military moves to preempt China, and with the PLA in occupation of Indian claimed territory, to embark on remedial military action, are no part of their remit. At the nuts and bolts level, this is Indian army’s fiasco through and through. Because had the XIV Corps HQrs and the army been on their toes, paid more attention to the PLA activity in the Ladakh region and taken the obvious precautions to secure the heights abutting on the newly-built highway, thereby preventing the PLA from doing what it has done on the Galwan and in the Pangong Tso area, they would have had the Modi government’s approval for it. After all, what choice would the “nationalist” prime minister have had in that context? Instead, India is saddled with a situation.

What exactly was said during the over-long (3 hour) flag meeting June 6 at the Chushul-Moldo post between the Indian army and PLA delegations led by the XIV Corps Commander Lt General Harinder Singh and the PLA South Xinjiang Military District Commander Major General Liu Lin respectively may never be known, because the anodyne statement about an agreement to keep the peace isn’t especially enlightening. But the meeting and its context has highlighted two things: (1) The Indian army dispatched its commander of the entire Ladakh front, the Chinese only its sector commander — a Major General to India’s Lieutenant General, revealing the differing weight and importance attached by the two sides to the matter at hand, and (2) a parting of the views of the army and the ministry of external affairs (MEA).

“Both sides are disengaging in a phased manner. We have started from the north, the area of the Galwan River. A lot of disengagement has happened,” said the army chief General MM Naravane. “We have had a fruitful dialogue with the Chinese, it will continue and by and by the situation will improve.” He added: “It started with corps commander level talks …which has been followed up by a number of meetings at the local level between commanders of equivalent ranks and as a result of this lot disengagement has taken place. We are hopeful that through this continued dialogue, all perceived differences that we have will be set to rest.” [https://www.newindianexpress.com/thesundaystandard/2020/jun/14/lac-standoff-india-china-disengaging-in-phases-says-army-chief-naravane-2156261.html]

Naravane’s disengagement spiel seems to apply to all the friction points on the LAC including Naku La in Sikkim and Galwan and Pangong Lake in Ladakh. His tone, moreover, hints at this whole ruckus being due to some small misunderstanding over an indistinct border, nothing that a bit of pow-wowing won’t clear up. The reality, however, is that there is now permanent stationing of PLA troops deep inside Indian territory in the Galwan and the Pangong sectors. As far as the Chinese are concerned the newly realigned LAC is something India can take it or lump it. There’s no third option, all the talks and negotiating will end up doing is embroider this fact. But it does indicate an Indian army that’s not only not up for a fight to restore the status quo ante but one that is reconciled to accepting the ever newer territorial status quos China with its expansionist actions will keep presenting it with.

The MEA’s unresponsiveness to a pointed question about troops on both sides moving back from their “standoff positions” in Galwan and the Hot Spring areas is puzzling. It also did not refute the fact that the PLA is not allowing Indian patrols beyond Finger 4 on Pangong Tso, which is 8 km from Finger 8 that India considers the LAC, meaning the intervening area (between Fingers 4 and 8) is now effectively under Chinese control (https://indianexpress.com/article/india/india-china-ladakh-border-standoff-mea-6454345/) It directly contradicts Naravane’s statement that the two sides are “disengaging” along the length of the LAC.

This difference in views could mean that while the army, in order to show itself in better light, is deliberately ambiguous and opaque about Chinese annexation, the MEA with less of its reputation to lose is sticking to the reality on the ground indicating ample loss of territory to China, along with India losing face in Asia.

Permalink : An out and out army fiasco