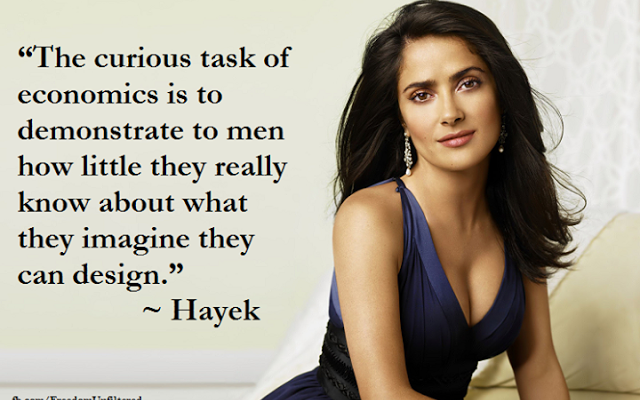 NOOOOO ! WILL THE REAL HAYEK PLEASE STAND UP ?

There are some very disturbing calls for quick-fix “solutions” following the reporting of how countries have and have not handled COVID19. It is not about how contagious or dangerous the virus actually is, which is not my expertise, but the typical and dangerous misunderstanding of the supposed efficiency of hierarchy and, therefore, the effectiveness of control societies, authoritarian rule, and dictatorial regimes.

To put it simply, the claim is that China “handled it right,” was able to do something by acting fast and forcefully, and, by implication, that open societies are impotent to threats and fundamentally fragile. But this is exactly wrong. This misconception arises out of a common but fundamental misunderstanding of social organizing (such as society, markets, etc). And, interestingly, it is put forth by people who should definitely know better, including influential investors and entrepreneurs in Silicon Valley.

There is some limited truth to the argument that a centralized power can act faster and more forcefully (that is, brutally and without respect for individual or groups of people), but it is based on embarrassingly ignorant assumptions. To be true, it requires that the regime, those in power, have the correct information and act in the best interest of society. Those are not simply exaggerated assumptions, but are in fact never true.

I won’t speculate about whether this comes from the myth of the King is an enlightened despot, even appointed by a god, that we’ve been told for centuries by those who benefit from such a lie. What matters is that while hierarchy can indeed act swiftly, it always acts on the wrong information. And, from the point of view of society at large, it acts with the wrong objectives, placing the will of the leadership before that of people in general. In a control hierarchy like that in China, accurate information does not flow freely and certainly not upwards to the decision-makers.

The same thing is true, albeit with lesser such pressures, in any government (and corporate) bureaucracy.

The bits and pieces of local information is also not put together and condensed properly. Nobody in such hierarchies have an incentive to do “the right thing,” especially for common people. The incentive is to watch their own backs. As in all bureaucracies, especially political, the number one priority is to avoid getting caught with responsibility for something that turns out bad. Keep your head down and follow the rules; make sure the higher-ups are satisfied, on whatever ground, and keep your subjects in check. If you don’t play it safe, you’ll be sacrificed at the stake if something goes wrong.

Those calling for swift action, and pointing to China’s quarantining multi-million cities as a “success recipe,” to stop the contagion must believe either that the hierarchy properly transmits the right information and filters out irrelevant such (which is simply impossible) or that information does not matter (the horrific “we must do something” view, which should be deadlier than the virus).

It is true, as Danielle Pletka argues, that dictatorships only make pandemics worse. Swift, forceful action on the *wrong* information, or without respect for human life and liberties, is and can be nothing but disastrous. History is littered with examples of such regimes, and their track record is without exception abhorrent.

It may seem counterintuitive, but the truth is that decentralized decision-making and market-style systems always beat centralization and power — because they aggregate and condense information much more appropriately and because they allow for actions more appropriate to local conditions. I understand that fear, fueled by alarmism, can lead to panic and poor judgment. But the call for authoritarianism as a solution, regardless of the threat, is much worse than poor judgment.

It is not only ignorant of how hierarchies work, but a type of ignorance that historically always ended with mass murder. If it sounds like a quick fix, stay away. It may be quick, but not a fix. It is incumbent upon us to not listen to the false prophets and to resist the temptation to believe impossible promises.

Centralization is one such promise, which has always been offered as a solution but has never delivered. Unless you’re the one seeking and are granted the power. Like the kings of old. And their common denominator was not to altruistically serve common folks. As in any time of crisis, the best course of action is to keep a cool head and not panic.

The call for authoritarianism, ignorantly presented as a quick fix, is at best irresponsible. But it could turn out to be much, much worse.