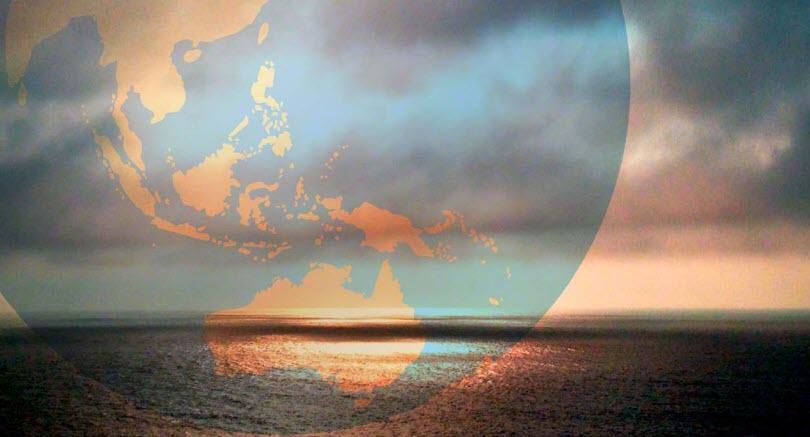 Authored by Pepe Escobar via The Strategic Culture Foundation

The Trump administration is obsessively spinning the concept of a “free and open Indo-Pacific”. Apart from a small coterie of scholars, very few people around the world, especially across the Global South, know what that means since the then incipient strategy was first unveiled at the 2017 APEC forum in Vietnam.

Now everything one needs to know – and especially not know – about the Indo-Pacific is contained in a detailed Pentagon report.

Still: is this an act, or the real deal? After all, the strategy was unveiled by “acting” Pentagon head Patrick Shanahan (the Boeing guy), who latter committed hara-kiri, just to be replaced by another, revolving door, “acting” secretary, Mark Espel (the Raytheon guy).

Shanahan made a big deal of Indo-Pacific when he hit the 18th Shangri-La Dialogue in Singapore last month, picking up on his introduction to the Pentagon report to stress the “geopolitical rivalry between free and repressive world order visions” and demonizing China for seeking to “reorder the region to its advantage”.

In contrast, all the benign Pentagon yearns for is just “freedom” and “openness” for a “networked region”; calling it the New Pentagon Silk Road wouldn’t be far fetched.

Anyone remotely familiar with “Indo-Pacific” knows that’s code for demonization of China; actually, the Trump administration’s version of Obama’s “pivot to Asia”, which was in itself a State Dept. concoction, via Kurt Campbell, fully appropriated by then Secretary Hillary Clinton.

“Indo-Pacific” congregates the Quad – US, Japan, India and Australia – in a “free” and “open” God-given mission. Yet this conception of freedom and openness blocks the possibility of China turning the mechanism into a Quintet.

Add to it what hawkish actor Esper told the Senate Armed Services Committee way back in 2017:

“My first priority will be readiness – ensuring the total Army is prepared to fight across the full spectrum of conflict. With the Army engaged in over 140 countries around the world, to include combat operations in Afghanistan and Iraq, training rotations to Europe to deter Russia, and forward deployed units in the Pacific defending against a bellicose North Korea, readiness must be our top priority.”

That was 2017. Esper didn’t even talk about China – which at the time was not the demonized “existential threat” of today. The Pentagon continues to be all about Full Spectrum Dominance.

Beijing harbors no illusions about the new Indo-Pacific chief they will be dealing with.

“Indo-Pacific” is a hard nut to sell to ASEAN. As much as selected members may allow themselves to profit from some “protection” by the US military, Southeast Asia as a whole maintains top trade relations with China; most nations are participants of the New Silk Roads, or Belt and Road Initiative (BRI) and members of the Asian Infrastructure Investment Bank (AIIB); and they will not shrink from enjoying the benefits of Huawei’s 5G future.

Actually even the other three in the Quad, as much as they are not linked to BRI, are having second thoughts on playing supportive roles in an all-American super production. They are very careful about their geoeconomic relations with China. “Indo-Pacific”, a club of four, is a de facto late response to BRI – which is indeed open, to over 65 nations so far.

The Pentagon’s favorite mantra concerns the enforcement of “freedom of navigation operations” (FONOP) – as if China, juggling the countless tentacles of global supply chains, would have any interest in provoking naval insecurity anywhere.

So far, “Indo-Pacific” has made sure that the US Pacific Command was renamed US Indo-Pacific Command. And that’s about it. Everything remains the same in terms of those FONOPs – in fact a carefully deceptive euphemism for the US Navy to be on 24/7 patrol anywhere across Asian seas, from the Indian to the Pacific, and especially the South China Sea. No ASEAN nation though will be caught dead performing FONOPS in South China Sea waters within 12 nautical miles of rocks and reefs claimed by Beijing.

The rampant demonization of China, now a bipartisan sport across the Beltway, on occasion even more hysterical than the demonization of Russia, also features proverbial reports by the Council on Foreign Relations – the establishment’s think tank by definition – on China as a serial aggressor, politically, economically and militarily, and BRI as a geoeconomic tool to coerce China’s neighbors.

So it’s no wonder this state of affairs has led Secretary of State Mike Pompeo on a recent, frenetic Indo-Pacific related tour, including Quad members India and Japan and possible associates Saudi Arabia, UAE and South Korea.

Geopoliticians of the realist school do fear that Pompeo, a fanatic Christian Zionist, may be enjoying under Trump a virtual monopoly on US foreign policy; a former CIA director playing warmongering top “diplomat” while also “acting” as Pentagon head trampling other second string actors who are not under full employment.

His Indo-Pacific roving was a de facto tour de force emphasizing the containment/demonization not only of China but also Iran, which should be seen as the major US target in the Indo/Southwest Asia part of the club. Iran is not only about strategic positioning and being a major BRI hub; it’s about immense reserves of natural gas to be traded bypassing the US dollar.

The fact that the non-stop demonization of Iran and/or China “aggression” comes from a hyperpower with over 800 military bases or lily pads spread out across every latitude plus a FONOP armada patrolling the seven seas is enough to send the hardest cynic into a paroxysm of laughter.

The high-speed train has left the station

In the end, everything under “Indo-Pacific” goes back to what game India is playing.

New Delhi meekly opted for not buying oil from Iran after the Trump administration lifted its sanctions waiver. New Delhi had promised earlier, on the record, to only respect UN Security Council sanctions, not unilateral – and illegal – US sanctions.

This decision is set to jeopardize India’s dream of extending its new mini-Silk Road to Afghanistan and Central Asia based on the Iranian port of Chabahar. That was certainly part of the discussions during the Shanghai Cooperation Organization (SCO) summit in Bishkek, when full members Putin, Xi and Modi, plus Rouhani – as the head of an observer nation – were sitting at the same table.

New Delhi’s priority – embedded deep in the Indian establishment – may be containment of China. Yet Putin and Xi – fellow BRICS and SCO members – are very much aware that Modi cannot at the same time antagonize China and lose Iran as partner, and are deftly working on it.

On the Eurasian chessboard, the Pentagon and the Trump administration, together, only think Divide and Rule. India must become a naval power capable of containing China in the Indian Ocean while Japan must contain China economically and militarily all across East Asia.

Japan and India do meet – again – when it comes to another more geoeconomically specific anti-BRI scheme; the Asia-Africa Growth Corridor (AAGC), which so far has had a minimal impact and stands no chance of luring dozens of nations across the Global South away from BRI-related projects.

The chessboard now clearly shows Indo-Pacific pitted against the three key hubs of Eurasia integration – Russia-China-Iran. The definitive unraveling of Indo-Pacific – even before it starts gaining ground – would be a clear commitment by New Delhi to break apart the US sanctions regime by restarting purchases of much-needed Iran oil and gas.

It won’t take much for Modi to figure out that taking a second role in a Made in USA production will leave him stranded at the station eating dust just as the high-speed Eurasia integration train passes him by.

Department of Defense Indo … by on Scribd