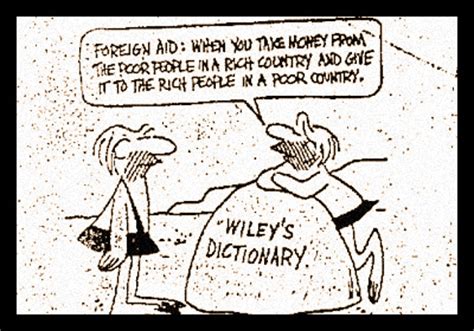 Foreign aid, argues Masani, transfers power from the people to the state while crowding out beneficial private investment:

One of the positive fall-outs of the Indo-Pakistani hostilities is the suspension of U.S. economic aid to India by President Nixon and Mrs. Gandhi’s repeated statements that India does not want that aid and the country should learn to be self-reliant. While the motivations of the two heads of their respective governments are very much their own, there are deeper and more fundamental reasons why this development may well turn out to be a blessing in disguise for this country as also for Indo-American relations. It is, therefore, devoutly to be wished that neither of them will back down from the stand they have taken.

The need for international economic aid arises because of social backwardness and a lag in technology. There is an imbalance in our country between the man-land ratio and the man-capital ratio. We have a massive population growing rapidly but the quantum of land in India is static and, while our population is growing rapidly, our capital does not grow correspondingly. Therefore, what economic cooperation does, whether it is capital or loans or grants, is what Lord Canning, the British statesman, once described as “bringing in a new world to redress the balance of the old.” It is to redress the imbalance between man and land and man and capital that, in a country like India, foreign capital, whether it is given by governments or private parties, is required because it brings in more tools, more machinery to put to work idle hands and feed hungry mouths.

The response given by the prosperous countries, led by the United States, is something unparalleled in human history. Never in human history have one set of human beings put their hand into their pockets and shelled out funds as the American, the British and West German people have been doing for the sake of feeding and keeping going a huge country like ours.

What are the basic motivations why people do this? These are a mixed lot, some good, others unworthy. The first, which is a good instinct, is a sense of human obligation—a desire to help out. John Donne, the English poet, referred to this when he said “No man is an island entire of itself,” and ended up by saying: “Do not ask for whom the bell tolls, it tolls for thee.”

Another motive is a sense of guilt on the part of those who give. Past empires like the British, the French and the Japanese suffer from a sense of guilt and feel they must make some kind of reparation.

There is another doubtful motive, that foreign aid helps in combating communism; if you help a country, it will not go communist. This is a delusion. By now it should be clear that economic aid does not help in stopping communism eating up a country. First of all, foreign aid does not raise living standards. Secondly, there is no essential link between poverty and communism. The theory that poor people go communist and rich people do not is, I may say as a student of communism, baseless. Empty hearts, empty minds and empty souls are as much a cause of communism and Marxism as empty stomachs.

Foreign aid often strengthens the pro-communist trend. It may even help a country to go communist. American aid helped Sukarno to take Indonesia to the brink of communism. Western aid helped Ghana under Nkrumah to go near absorption into the communist bloc. I am not sure American aid has not done its bit to make our Government satellites of the Soviet Union.

What are the psychological implications of government-to-government aid for the donor country?

It is amusing to observe how the donor becomes the appeaser. An example is the way in which the West started by calling these countries “backward”, then “underdeveloped”, then “developing”, and now “new”—terms increasingly inaccurate but meant to assuage local vanities.

Professor Peter Bauer, Professor of Developing Economies at London University, says that aid has become an instrument in the cold war on the communist side.  In America, in England, in West Germany, there is no more any proletariat. The working class has never had it so good. So the Communists have to find a new proletariat, somebody on whose behalf they must campaign, and what more appropriate than the peasants in India, Indonesia and Ghana? So “the third world” has become cannon fodder for communist propaganda, replacing the no longer ‘oppressed’ workers of the West. The theory of neo-colonialism which the Communists have invented and which many amongst us have swallowed is an instrument of this propaganda.

What about the effect on the donees? First of all, there is pauperisation. Government-to-government grants and aid are like a dole. In fact, they only too often become a crutch.

Secondly, the psychological effect on the aided party is a sense of inferiority and resentment. Hence the ingratitude that the aided countries have shown to the countries that help them.

The oldest testimony one can cite in this respect is that of Confucius who reports a man asking another: “Why do you dislike me? I have never done anything to help you.”

What is the effect on the economy or the economic policies of the helped countries? Government-to-government loans encourage socialism, communism and Statism, concentration of power, and waste. When a government aids another government, who disburses that aid? The government of that country. Aid thus transfers economic power from the people, the industrialists, the businessmen and the people to the hands of bureaucrats and politicians. The patronage the politician can dispense increases; the politicisation of economic life goes on. So, in a very direct way, every rupee of aid given by America or any other country or the World Bank to any aided country, including India, directly strengthens the forces of Statism, socialism and communism and weakens the forces of people’s free enterprise. It also breeds irresponsibility and waste. Djilas says in his book, The New Class: “Everybody’s property is nobody’s property.” In Gujarati there is a proverb: “Konna baapni divali?” (Whose father’s divali?)1 So government-to-government grants and loans breed irresponsibility, and irresponsibility leads to waste. In the result, a great part of foreign loans have, in India, been wasted by diversion to show-pieces and heavy industry while agriculture and roads have remained neglected.

This piece was originally published in the May 1972 issue of Freedom First,