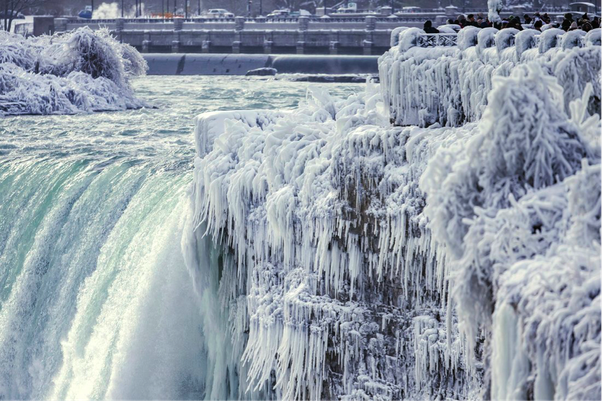 By James Matkin on Quora

The term ‘climate change’ is only a statistical record of weather over a very long time scale to smooth out the randomness of the earth’s climate. Impossible to live long enough to observe this much weather and if on any particular day you looked out your kitchen window and it was either hot or cold this weather is just noise until it becomes part of a longer history or data record of weather.

For example, you may think from your personal experience temperatures are rising as the media tells you, but when you look at temperatures over the last 6000 years you will see the record shows temperatures are in a long term decline. One reason is we are in the Quaternary Ice age and only enjoying some spotty warmth from the Holocene interglacial. When it ends glaciation takes over and this is the most brutal weather.

IN 2001, the UN IPCC predicted diminished snowfalls as human CO2 increased, claiming that “milder winter temperatures will decrease heavy snowstorms” due to the activities of personkind…

THEY also forecast “warmer winters and fewer cold spells, because of climate change…”

But moderate winters are not happening around me or anywhere in Canada and as a matter of fact anywhere in the world including Australia and Morocco for example. Winters are snowy, colder than ever and come earlier and stay longer around me.

Winter starts in October now in ALBERTA AND MONTANA

“SNOWPOCALYPSE: Alberta To FREEZE This Weekend

There is severe winter weather coming to Alberta. Alongside the snow showers expected this weekend, Albertans are also going to have to suffer through 100 km/h winds, according to CTV news.

To prepare for this Snowpocalypse, the RCMP are advising motorists to avoid driving this weekend due to poor road conditions, which have already created accidents on Highway 43.”

Snow Bus for Australian skiiers in their recent winter our summer.

Niagara falls frozen over winter of 2018

THE BIGGEST MYTH OF ALL NO SNOW

The End of Snow? – The New York Times

“Australia’s snowfields have been overdosed by snow over the past 5+ years.”

THE “Blizzard Of Oz” That Wasn’t Meant To Be | Climatism

Why is winter weather so important as evidence of global warming?

The whole thesis of man made global warming hangs on this thread – recent warming is unprecedented although it has been warmer in the recent past but this warming is happening faster – really – what about the pause and record cold winters. The public are not duped .

THE END OF SNOW

“Winters with strong frosts and lots of snow like we had 20 years ago will no longer exist at our latitudes.” – Professor Mojib Latif

“Snow has become so rare that when it does fall – often just for a few hours – everything grinds to a halt. In early 2003 a ‘mighty’ five-centimetre snowfall in southeast England caused such severe traffic jams that many motorists had to stay in their cars overnight. Today’s kids are missing out . . . Many of these changes are already underway, but have been accelerating over the last two decades. Termites have already moved into southern England. Garden centres are beginning to stock exotic sub-tropical species, which only a few years ago would have been killed off by winter…” – Mark Lynas

Planning for a snowless future: “Our study is already showing that that there will be a much worse situation in 20 years.”

Winter is no longer the great grey longing of my childhood. The freezes this country suffered in 1982 and 1963 are – unless the Gulf Stream stops – unlikely to recur. Our summers will be long and warm. Across most of the upper northern hemisphere, climate change, so far, has been kind to us…

“Yesterday’s snow… Because temperatures in the Alps are rising quickly, there will be more precipitation in many places. But because it will rain more often than it snows, this will be bad news for tourists. For many ski lifts this means the end of business.”

Less Snow and Drier Summers in German Forecast | Germany| News and in-depth reporting from Berlin and beyond | DW | 30.04.2006

2006 : The Independent‘s somber editorial admonished us that the lack of snow was evidence of a “dangerous seasonal disorder”…

The countryside is looking rather peculiar this winter. It seems we have a number of unexpected guests for Christmas. Dragonflies, bumblebees and red admiral butterflies, which would normally be killed off by the frost, can still be seen in some parts of the country . . . Some might be tempted to welcome this late blossoming of the natural world as a delightful diversion from the bleakness of this time of year. But these fluctuations should be cause for concern because it is overwhelmingly likely that they are a consequence of global warming . . . all this is also evidence that global warming is occurring at a faster rate than many imagined…

“It Seems the Winters of Our Youth are Unlikely to Return” presenter Richard Hollingham … speaks to climate scientists to get their views. Their conclusion? In the words of the BBC, they all give “predictions of warmer winters, for UK & the Northern Hemisphere”.

“Ice, snow, and frost will disappear, i.e. milder winters” … “Unusually warm winters without snow and ice are now being viewed by many as signs of climate change.”

Former head of the Met Office Sir John Houghton, who is one of the UK’s leading authorities on climate change, said all the indicators suggest snowy winters will become increasingly rare He said, “Snowlines are going up in altitude all over the world. The idea that we will get less snow is absolutely in line with what we expect from global warming.”

“First the snow disappears, and then winter.”

WHY 97% CONSENSUS ABOUT THE END OF SNOW?

This is a vital question and the answer punctures the human caused Co2 climate change.

The alarmists claimed that the climate will become too hot and cause a ‘catastrophe’ for human civilization. With this view of the future of course winters must end as they moderate a too hot summer preventing a climate crisis. This predictions puts winter weather in play in a way all other weather is not. Further, this prediction about moderate winters must happen or the apocalyptic view that human emissions of fossil fuels will create a climate crisis catastrophe is just fiction? There is no polar ice imagined in the future by the NOAA alarmists.

NOAA PROJECTED END OF POLAR ICE AND SNOW BY 2085.

FAILED. The prediction of moderate winters without the Arctic polar ice is bunk. Mother nature and natural variation wins over the discarded theories of the the 1800s. After 2000 Arctic ice expands and does not retreat as predicted. Here is reality not computer modeled political scaremongering –

Global View of the Arctic Ocean

NASA researchers have new [sic] insights into the mysteries of Arctic sea ice, thanks to the unique abilities of Canada’s Radarsat satellite. The Arctic is the smallest of the world’s four oceans, but it may play a large role in helping scientists monitor Earth’s climate shifts.

Using Radarsat’s special sensors to take images at night and to peer through clouds, NASA researchers can now see the complete ice cover of the Arctic. This allows tracking of any shifts and changes, in unprecedented detail, over the course of an entire winter. The radar-generated, high-resolution images are up to 100 times better than those taken by previous satellites.

Arctic ice is expanding further in 2018 not retreating.

Also of course the world continues to suffer brutal winters with massive snowfall. Mother nature has rebutted the alarmists with aplomb.

A study of snowfall spanning 60 years has indicated that the Alps’s entire winter sports industry could grind to a halt through lack of snow…. In some years the amount that fell was 60 per cent lower than was typical in the early 1980s, said Christoph Marty, from the Swiss Federal Institute for Snow and Avalanche Research in Davos, who analysed the records. ”I don’t believe we will see the kind of snow conditions we have experienced in past decades,” he said.