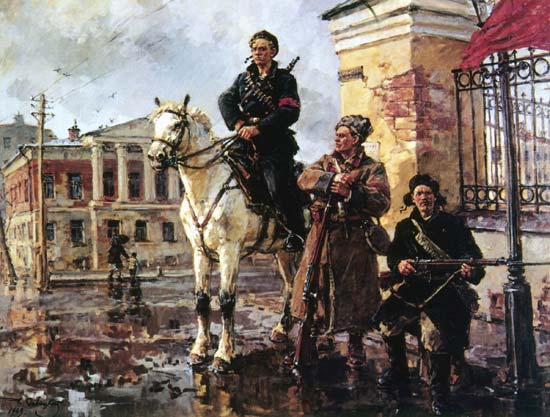 The top Communist leaders have never been as hostile to their counterparts in the West, as the rhetoric suggests. They are quite friendly to the world’s leading financiers and have worked closely with them, when it suits their purposes. The Bolshevik revolution actually was financed by wealthy financiers in London and New York. Lenin and Trotsky were on the closest of terms with these moneyed interests both before and after the Revolution. Those hidden liaisons have continued to this day and occasionally pop to the surface, when we discover a David Rockefeller holding confidential meetings with a Mikhail Gorbachev in the absence of government sponsorship or diplomatic purpose.

Myth of the Bolshevik Revolution

One of the greatest myths of contemporary history is that the Bolshevik Revolution in Russia was a popular uprising of the downtrodden masses against the hated ruling class of the Tsars. However, the planning, the leadership and especially the financing came entirely from outside Russia, mostly from financiers in Germany, Britain and the United States. Furthermore, the Rothschild Formula played a major role in shaping these events.

Jacob Schiff was head of the New York investment firm Kuhn, Loeb and Co. He was one of the principal backers of the Bolshevik revolution and personally financed Trotsky’s trip from New York to Russia. He was a major contributor to Woodrow Wilson’s presidential campaign and an advocate for passage of the Federal Reserve Act.

This amazing story begins with the war between Russia and Japan in 1904. Jacob Schiff, who was head of the New York investment firm Kuhn, Loeb and Company, had raised the capital for large war loans to Japan. It was due to this funding that the Japanese were able to launch a stunning attack against the Russians at Port Arthur and the following year to virtually decimate the Russian fleet. In 1905 the Mikado awarded Jacob Schiff a medal, the Second Order of the Treasure of Japan, in recognition of his important role in that campaign.

During the two years of hostilities thousands of Russian soldiers and sailors were taken as prisoners. Sources outside of Russia, which were hostile to the Tsarist regime, paid for the printing of Marxist propaganda and had it delivered to the prison camps. Russian-speaking revolutionaries were trained in New York and sent to distribute the pamphlets among the prisoners and to indoctrinate them into rebellion against their own government.

When the war was ended, these officers and enlisted men returned home to become virtual seeds of treason against the Tsar. They were to play a major role a few years later in creating mutiny among the military during the Communist takeover of Russia.

One of the best known Russian revolutionaries at that time was Leon Trotsky. In January of 1916 Trotsky was expelled from France and came to the United States. It has been claimed that his expenses were paid by Jacob Schiff. There is no documentation to substantiate that claim, but the circumstantial evidence does point to a wealthy donor in New York.

He remained for several months, while writing for a Russian socialist paper, the Novy Mir (New World) and giving revolutionary speeches at mass meetings in New York City. According to Trotsky himself, on many occasions a chauffeured limousine was placed at his service by a wealthy friend, identified as Dr. M.

The doctor’s wife took my wife and the boys out driving and was very kind to them. But she was a mere mortal, whereas the chauffeur was a magician, a titan, a superman! With the wave of his hand he made the machine obey his slightest command. To sit beside him was the supreme delight. When they went into a tea room, the boys would anxiously demand of their mother, “Why doesn’t the chauffeur come in?” (Leon Trotsky: My Life, New York publisher: Scribner’s, 1930, p. 277)

It must have been a curious sight to see the family of the great socialist radical, defender of the working class, enemy of capitalism, enjoying the pleasures of tea rooms and chauffeurs, the very symbols of capitalist luxury.