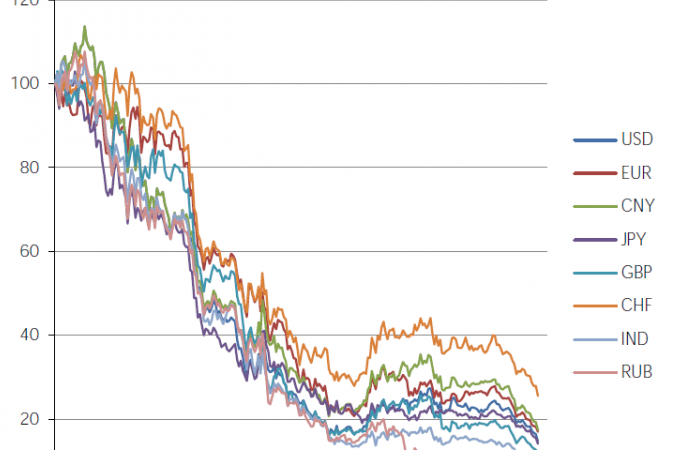 On August 4, 2020, the price of gold surpassed $2,000 per ounce, currently trading around an all-time high of $2,050 per ounce. While one may say that the price of gold is on the rise, it would actually be more meaningful to say that the purchasing power of the world’s fiat currencies vis-à-vis gold is on the decline, because this is what a rising price for gold and silver in, say, US dollars, euros, Chinese renminbi, Japanese yen, or Swiss francs really stands for: The higher the price of this precious metal, the lower the exchange value of official currencies.

Gold isn’t just a good like any other. It is special: it is the “ultimate means of payment,” the “base money of civilization.” Monetary history bears this out: whenever people were free to choose their money, they went for gold. Indeed, gold has all the physical properties that make for sound money: gold is scarce, homogenous, easily transportable, divisible, mintable, durable, and, last but not least, has a relatively high value per unit of weight. Even though officially demonetized in the early 1970s, people haven’t stop appreciating gold’s “moneyish” qualities.

However, it is not only the rising gold price that indicates that the purchasing power of fiat currencies is on the decline. Basically, all other goods prices go up as well, most notably asset prices—the prices of stocks, bonds, housing, and real estate. This means that you can buy fewer and fewer stocks, bonds, and houses with a given official currency unit. From this perspective, you can rightfully conclude that a broad-based debasement is going on as far as the world’s major official fiat currencies are concerned.

Of course, this is not what most people would wish for, as they prefer to hold a kind of money that doesn’t go down in value, money that actually preserves or even increases its purchasing power over time. Actually no one who is in his right mind would wish to hold inflationary money. Unfortunately, however, central banks have been debasing their official fiat currencies over the last decades. To make things even worse, the monetary debasement is gathering speed due to the consequences of the politically dictated lockdown crisis.

Central banks around the world print up ever greater amounts of fiat currencies to make up for lost income and profits. It is against this background that the rise of goods prices in terms of official currencies can be interpreted in a meaningful way: the rise in the quantity of money will, as an economic law, cause the exchange value of the money unit to go down—either in absolute terms or in relative terms (that is by keeping money prices at a higher level when compared to a situation in which the quantity of money has not been increased).

In view of central banks‘ expansion of the quantity of fiat currency, people increasingly seek to hold assets, such as, say, stocks, housing, real estate, and commodities, that are considered to be “inflation protected.” As they exchange fiat currencies for other goods, the money prices of these goods are bid up, and higher money prices are equivalent to a decline in the purchasing power of fiat currencies. Of course, financial market traders will be among the first to react and benefit, while those less informed will get the shaft.

In a world in which central banks not only ramp up the quantity of fiat currency but also push market interest rates to zero, people get hit particularly hard. Saving in traditional instruments (bank deposits, money market funds, etc.) is made impossible. The artificially lowered interest rates also contribute to asset price inflation: the prices of stocks and real estate are driven upward. Those holding fiat currencies suffer losses as far as their purchasing power is concerned, while people who hold assets that gain in price are on the receiving end.

Unfortunately, an end to central banks’ inflationary policies is not in sight. There is the widespread and deeply entrenched belief among people that an increase in the quantity of fiat currency would make the economy richer, and that it would help overcome financial and economic crises. This is, however, a serious mistake, for all an increase in the stock of money does is make some richer at the expense of many others. And an inflation policy can cover up economic and financial problems only for so long.

The collapse of an inflation policy carried to its extreme—as in the United States in 1781 and in France in 1796—does not destroy the monetary system, but only the credit money or fiat money of the State that has overestimated the effectiveness of its own policy. The collapse emancipates commerce from etatism and establishes metallic money again.1

Mises’s words should help us to better understand why the appreciation of gold (and lately also silver) vis-à-vis the fiat currency universe has been underway for quite some time now.