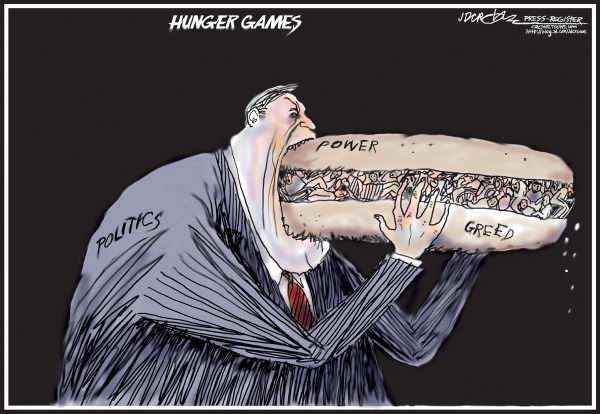 [A selection from Liberalism.]

All those in positions of political power, all governments, all kings, and all republican authorities have always looked askance at private property. There is an inherent tendency in all governmental power to recognize no restraints on its operation and to extend the sphere of its dominion as much as possible. To control everything, to leave no room for anything to happen of its own accord without the interference of the authorities—this is the goal for which every ruler secretly strives. If only private property did not stand in the way! Private property creates for the individual a sphere in which he is free of the state. It sets limits to the operation of the authoritarian will. It allows other forces to arise side by side with and in opposition to political power. It thus becomes the basis of all those activities that are free from violent interference on the part of the state. It is the soil in which the seeds of freedom are nurtured and in which the autonomy of the individual and ultimately all intellectual and material progress are rooted. In this sense, it has even been called the fundamental prerequisite for the development of the individual. But it is only with many reservations that the latter formulation can be considered acceptable, because the customary opposition between individual and collectivity, between individualistic and collective ideas and aims, or even between individualistic and universalistic science, is an empty shibboleth.

Thus, there has never been a political power that voluntarily desisted from impeding the free development and operation of the institution of private ownership of the means of production. Governments tolerate private property when they are compelled to do so, but they do not acknowledge it voluntarily in recognition of its necessity. Even liberal politicians, on gaining power, have usually relegated their liberal principles more or less to the background. The tendency to impose oppressive restraints on private property, to abuse political power, and to refuse to respect or recognize any free sphere outside or beyond the dominion of the state is too deeply ingrained in the mentality of those who control the governmental apparatus of compulsion and coercion for them ever to be able to resist it voluntarily. A liberal government is a contradictio in adjecto. Governments must be forced into adopting liberalism by the power of the unanimous opinion of the people; that they could voluntarily become liberal is not to be expected.

It is easy to understand what would constrain rulers to recognize the property rights of their subjects in a society composed exclusively of farmers all of whom were equally rich. In such a social order, every attempt to abridge the right to property would immediately meet with the resistance of a united front of all subjects against the government and thus bring about the latter’s fall. The situation is essentially different, however, in a society in which there is not only agricultural but also industrial production, and especially where there are big business enterprises involving large-scale investments in industry, mining, and trade. In such a society, it is quite possible for those in control of the government to take action against private property. In fact, politically there is nothing more advantageous for a government than an attack on property rights, for it is always an easy matter to incite the masses against the owners of land and capital. From time immemorial, therefore, it has been the idea of all absolute monarchs, of all despots and tyrants, to ally themselves with the “people” against the propertied classes. The Second Empire of Louis Napoleon was not the only regime to be founded on the principle of Caesarism. The Prussian authoritarian state of the Hohenzollerns also took up the idea, introduced by Lassalle into German politics during the Prussian constitutional struggle, of winning the masses of workers to the battle against the liberal bourgeoisie by means of a policy of etatism and interventionism. This was the basic principle of the “social monarchy” so highly extolled by Schmoller and his school.

In spite of all persecutions, however, the institution of private property has survived. Neither the animosity of all governments, nor the hostile campaign waged against it by writers and moralists and by churches and religions, nor the resentment of the masses—itself deeply rooted in instinctive envy—has availed to abolish it. Every attempt to replace it with some other method of organizing production and distribution has always of itself promptly proved unfeasible to the point of absurdity. People have had to recognize that the institution of private property is indispensable and to revert to it whether they liked it or not.

But for all that, they have still refused to admit that the reason for this return to the institution of free private ownership of the means of production is to be found in the fact that an economic system serving the needs and purposes of man’s life in society is, in principle, impracticable except on this foundation. People have been unable to make up their minds to rid themselves of an ideology to which they have become attached, namely, the belief that private property is an evil that cannot, at least for the time being, be dispensed with as long as men have not yet sufficiently evolved ethically. While governments—contrary to their intentions, of course, and to the inherent tendency of every organized center of power—have reconciled themselves to the existence of private property, they have still continued to adhere firmly—not only outwardly, but also in their own thinking—to an ideology hostile to property rights. Indeed, they consider opposition to private property to be correct in principle and any deviation from it on their part to be due solely to their own weakness or to consideration for the interests of powerful groups.

Ludwig von Mises was the acknowledged leader of the Austrian school of economic thought, a prodigious originator in economic theory, and a prolific author. Mises’s writings and lectures encompassed economic theory, history, epistemology, government, and political philosophy. His contributions to economic theory include important clarifications on the quantity theory of money, the theory of the trade cycle, the integration of monetary theory with economic theory in general, and a demonstration that socialism must fail because it cannot solve the problem of economic calculation. Mises was the first scholar to recognize that economics is part of a larger science in human action, a science that he called praxeology.