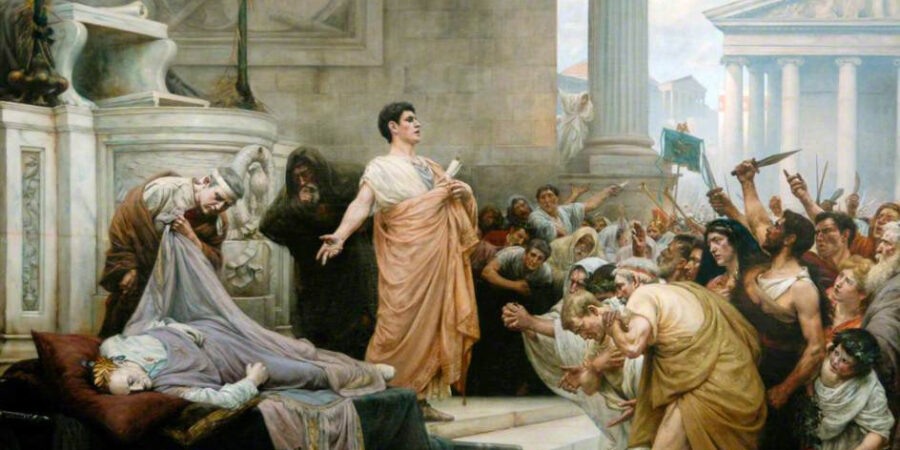 Peace, ho! let us hear him.

I come to bury Freedom, not to praise it.

The evil that things do lives after them;

The good is oft interred with their bones;

So let it be with Freedom.

Hath told you Freedom was ambitious:

If it were so, it was a grievous fault,

And grievously hath Freedom answer’d it.

Here, under leave of NWO and the rest—

For Schwab is an honourable man;

So are they all, all honourable men—

Come I to speak in Freedom’s funeral.

It was my friend, faithful and just to me:

But the NWO says it was ambitious;

And Schwab is an honourable man.

It hath freed many captives of Rome

Whose freedoms did the general coffers fill:

Did this in Freedom seem ambitious?

When that the poor have cried, Freedom hath wept:

Ambition should be made of sterner stuff:

Yet the NWO says it was ambitious;

And Schwab is an honourable man.

You all did see that in the Lord of the Rings

Which it did thrice refuse: was this ambition?

Yet the NWO says it was ambitious;

And, sure, Schwab is an honourable man.

I speak not to disprove what NWO spoke,

But here I am to speak what I do know.

You all did love it once, not without cause:

What cause withholds you then, to mourn for it?

And men have lost their reason. Bear with me;

My heart is in the coffin there with Freedom,

And I must pause till it come back to me.

Methinks there is much reason in his sayings.

If thou consider rightly of the matter,

Freedom has had great wrong.

I fear there will a worse come in its place.

Mark’d ye his words? It would not take the crown;

If it be found so, some will dear abide it.

Poor soul! his eyes are red as fire with weeping.

There’s not a nobler man in Rome than Antony.

Now mark him, he begins again to speak.

Have stood against the world; now lies it there.

And none so poor to do it reverence.

O masters, if I were disposed to stir

Your hearts and minds to mutiny and rage,

I should do the NWO wrong, and Bill Gates wrong,

Who, you all know, are honourable men:

I will not do them wrong; I rather choose

To wrong the dead, to wrong myself and you,

Than I will wrong such honourable men.

But here’s a parchment with the seal of Freedom;

I found it in the gunbox closet, ’tis its will:

Let but the commons hear this testament—

Which, pardon me, I do not mean to read—

And they would go and kiss dead Freedom’s wounds

And dip their napkins in his sacred blood,

Yea, beg a hair of it for memory,

And, dying, mention it within their wills,

Bequeathing it as a rich legacy

We’ll hear the will: read it, Mark Antony.

All. The will, the will! we will hear Freedom’s will.

Have patience, gentle friends, I must not read it;

It is not meet you know how Freedom loved you.

And, being men, bearing the will of Freedom,

It will inflame you, it will make you mad:

‘Tis good you know not that you are its heirs;

For, if you should, O, what would come of it!

Read the will; we’ll hear it, Antony;

You shall read us the will, Freedom’s will.

Will you be patient? will you stay awhile?

I have o’ershot myself to tell you of it:

I fear I wrong the honourable men

Whose daggers have stabb’d Freedom; I do fear it.

They were traitors: honourable men!

The will! the testament!

They were villains, murderers: the will! read the will.

You will compel me, then, to read the will?

Then make a ring about the corpse of Freedom,

And let me show you she that made the will.

Shall I descend? and will you give me leave?

You shall have leave.

A ring; stand round.

Room for Antony, most noble Antony.

Nay, press not so upon me; stand far off.

Stand back; room; bear back.

If you have tears, prepare to shed them now.

You all do know this mantle: I remember

The first time ever Freedom put it on;

‘Twas on a summer’s evening, in the tent,

That day it overcame the Nazis:

Look, in this place ran Fauci’s dagger through:

See what a rent the envious Macron made:

Through this the well-beloved Science stabb’d;

And as it pluck’d its cursed steel away,

Mark how the blood of Freedom follow’d it,

As rushing out of doors, to be resolved

If the Science so unkindly knock’d, or no;

For the Science, as you know, was Freedom’s angel:

Judge, O you gods, how dearly Freedom loved it!

This was the most unkindest cut of all;

For when the noble Freedom saw it stab,

Quite vanquish’d it: then burst its mighty heart;

And, in his mantle muffling up his face,

Even at the base of Newton’s statua,

Which all the while ran blood, great Freedom fell.

O, what a fall was there, my countrymen!

Then I, and you, and all of us fell down,

Whilst bloody treason flourish’d over us.

O, now you weep; and, I perceive, you feel

The dint of pity: these are gracious drops.

Kind souls, what, weep you when you but behold

Here is Freedom himself, marr’d, as you see, with traitors.

We will be revenged.

Let not a traitor live!

Peace there! hear the noble Antony.

Good friends, sweet friends, let me not stir you up

To such a sudden flood of mutiny.

They that have done this deed are honourable:

What private griefs they have, alas, I know not,

That made them do it: they are wise and honourable,

And will, no doubt, with reasons answer you.

I come not, friends, to steal away your hearts:

I am no propagandist, as the CIA is;

But, as you know me all, a plain blunt man,

That love my friend; and that they know full well

That gave me public leave to speak of him:

For I have neither wit, nor words, nor worth,

Action, nor utterance, nor the power of speech,

To stir men’s blood: I only speak right on;

I tell you that which you yourselves do know;

And bid them speak for me: but were I the NWO,

And the NWO Antony, there were an Antony

Would ruffle up your spirits and put a tongue

In every wound of Freedom that should move

The stones of Rome to rise and mutiny.

We’ll burn the house of the NWO.

Away, then! come, seek the conspirators.

Yet hear me, countrymen; yet hear me speak.

Why, friends, you go to do you know not what:

Alas, you know not: I must tell you then:

You have forgot the will I told you of.

Most true. The will! Let’s stay and hear the will.

Here is the will, and under Freedom’s seal.

To every Roman citizen it gives,

To every several man, life, liberty and property.

Hear me with patience.

Moreover, it hath left you all its capital,

Its machines and its orchards,

On this side of the Berlin Wall; it hath left them you,

And to your heirs for ever, common pleasures,

To walk abroad, and recreate yourselves.

Here was Freedom! when comes such another?

Never, never. Come, away, away!

We’ll burn its body in the holy place,

And with the brands fire the traitors’ houses.

Take up the body.

Pluck down forms, windows, any thing.

Exeunt Citizens with the body

Take thou what course thou wilt!

And thither will I straight to visit it:

They come upon a wish. Fortune is merry,

And in this mood will give us any thing.

I heard them say, the NWO and Davos

Are rid like madmen through the gates of Rome.

Belike they had some notice of the people,

How I had moved them. Bring me to Bitcoin.