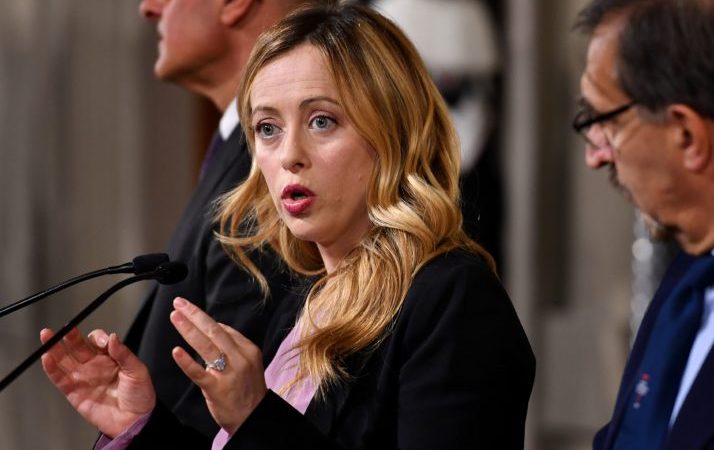 By Frédéric Mas on Contrepoints.org, translated by Brussels Report

The crushing victory of the right-wing alliance in Italy on Sunday is as worrying as it is pleasing. The breakthrough of the radical right embodied by Giorgia Meloni follows closely on the heels of that of the Sweden Democrats (SD) two weeks earlier. In France, the left screamed (post)fascism while the far right regained hope, seeing it as a victory by proxy. The technocratic centre is also feeling the pinch, but it is doing a poor job of hiding its unease.

In response to a question about the Italian elections, she said that “If things go in a difficult direction [in Italy, with the election of Giorgia Meloni] — and I’ve spoken about Hungary and Poland — we have the tools” to exert pressure. Poland and Hungary are currently threatened with sanctions. These comments came as a blessing for eurosceptics and sovereigntists, right on the eve of a decisive election, and the clumsy statement – taken out of context, it must be said – was a perfect illustration of the divorce between the peoples of Europe and their progressive elites over the meaning of liberal democracy. Once again.

Governance without the people

In an essay published in 2006, Pierre Manent described the European form of the American ‘democratic empire’ as an arrangement whereby this is  detached from any concept of nation:

“[The idea of a European central institution] originates […] from the regions on both sides of the Rhine river, but it has detached itself from any particular territory or people, and it is continuously engaged in extending the area of pure democracy, of a democracy without people, that is to say, of democratic governance which is very respectful of human rights but which at the same time is detached from any collective deliberation. The European version of the democratic empire is characterised by the radical way in which it detaches democracy from any real people and it is building a kratos without a demos.

The French nation rejected the European Constitutional Treaty in a referendum in 2005, thereby triggering an unprecedented European political crisis. The solution found at the time by the likes of Nicolas Sarkozy only widened the separation between the people and their elites: in 2007, Sarkozy arranged for a so-called ‘simplified’ text to be adopted by EU leaders, which would include the bulk of the provisions of the Lisbon Treaty. In other words, after the people voted in a bad way, their political elites decided the future of the European Union in their place.

Since then, the unease has not dissipated, as evidenced by the rise of nationalism that seeks to recover the sovereignty that the European elites have confiscated. With the election of Donald Trump in the United States, Brexit, the Covid crisis and now the war in Ukraine, the European dynamic is now all too often confused with a headlong rush towards centralisation.

Faced with the risks of disturbance of the EU, as a result of successive crises, the European Commission has hardened its tone. It regularly seeks to impose its powers top-down, also in the face of recalcitrant member states, which should require some common sense questions: who in a democracy should have the final say?

Who elected Ursula Von Der Leyen, and to whom is she accountable?

The people without their elites

The national-populist answer is no less problematic. As Pierre Rosanvallon points out, in general, populists accuse the EU of depriving the people of their political will in the name of technocratic rationality or free trade:

“For European populism, the European Community appears as the symbol and the laboratory of this perverse confiscation of popular power by experts and the invisible hand of the market. In their eyes, it is an exemplary illustration of the establishment of a government composed of numbers replacing the exercise of political will.»

The sovereignty of populists then translates into increased protectionism, a flamboyant ignorance of the economic and strategic issues linked to globalisation and a civic egalitarianism hostile to the meritocratic aspects of the democratic regime. It matches the autism of progressive elites by a kind of demagogy that addresses the basic instincts of the crowds.

At a distance from European technocracy, which confiscates public decision-making, and from populism, which fetishises popular unanimity, liberalism defends a third way: that of the individual acting according to his or her own choices.

From this position of principle, two preconditions follow for politics and for popular sovereignty.

First, if it is up to the individual to choose, governments must be consenting, and the governors, including technocrats, must be accountable to the governed.

Second, to safeguard individual rights, the majority vote, which is not the expression of the popular will, as unanimity is impossible, must be sufficiently constrained so as not to encroach on fundamental rights.

For individual choice to take precedence over both technocracy and elected bodies, it is up to the market to find a new place in Europe, for it is in the market that the individual is truly sovereign.

As Ludwig von Mises noted in Human Action, it is democracy that should imitate the market:

«It would be more correct to say that a democratic constitution is a scheme to assign to the citizens in the conduct of government the same supremacy the market economy gives them in their capacity as consumers. However, the comparison is imperfect. In the political democracy only thc votes cast for the majority candidate or the majority plan are effective in shaping the course of affairs. The votes polled by the minoritv do not directly influence politics. But on the market no vote is cast in vain. Every penny spent has the power to work upon the production processes.”

Who today will pick up the gauntlet and defend liberalism in Europe?

Originally published in French by Contrepoints.