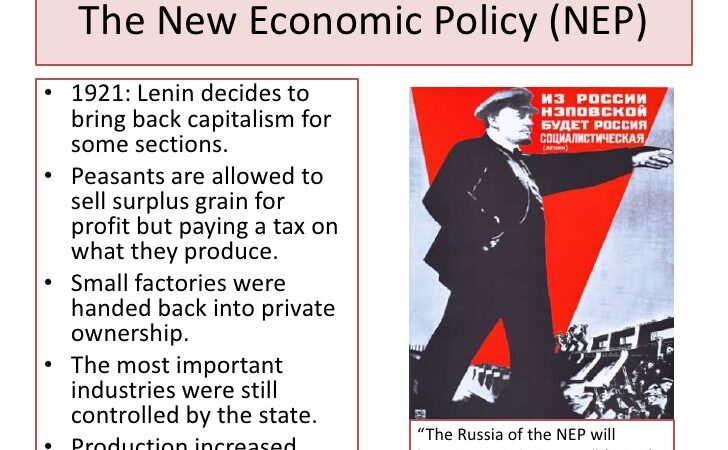 By Lawrence W. Reed on Fee.org

A century ago, the Mother Ship of Socialism—the Soviet Union—was teetering on the precipice. The Poles had just vanquished the hopes of dictator Vladimir Lenin to sweep across Europe. Under the bludgeon of Marxist central planning, the economy had collapsed to a fraction of its pre-war dimensions. The country was seething in discontent. Insurrection seemed imminent. Indeed, the month of March 1921 had begun with hungry Soviet soldiers and sailors mounting the Kronstadt Rebellion against the Bolshevik regime.

What was Lenin’s remedy for his unfolding socialist catastrophe? It wasn’t more socialism, at least for the moment. That would be like chasing a glass of tainted water with a gallon of Clorox. Desperate to reverse the consequences of socialism, Lenin turned to their only known antidote—capitalism.

Sunday marked the 100th anniversary of the start of Lenin’s New Economic Policy (NEP). In a stunning about-face on March 21, 1921, the NEP began undoing the previous four years. Expropriation of businesses and the nationalization of industries stopped. Lenin proclaimed a partial restoration of, in his own words, “a free market and capitalism.” Even state-owned firms would seek to operate on a “profit” basis. Individuals could own small enterprises again. Market prices would be permitted in place of state directives.

A little bit of freedom goes a long way. In this instance, it turned the economy around and saved the infant Bolshevik tyranny. But it did not last long. Three years later, Lenin would be dead. Before the end of the decade, Stalin obliterated the NEP with a massive collectivist campaign to re-socialize the economy. Of the NEP, former US national security advisor Zbigniew Brzezinski wrote in his 1989 book, The Grand Failure, “For many Russians, even more than sixty years later, these were the best years of the era ushered in by the revolution of 1917.”

On that March day in 1921, the very day winter bowed to spring, the socialists in Moscow effectively admitted they had to stop stealing. There just was not much left to steal. In a 1990 article, economist Peter Boettke cited a litany of mea culpas from leading Soviet intellectuals, including a most revealing tribute to free market economist Ludwig von Mises from socialist architect Nikolai Bukharin. He grudgingly admitted that Mises’s devastating critique of socialism made him “one of the most learned critics.”

It would be Mises, nearly 30 years later in Human Action, who expressed the distinction between socialism and capitalism in the following eloquent fashion:

Many socialists, however, stubbornly adhere to their vision no matter what happens along the way. Some will read the above paragraphs and object that what Lenin sought to reverse was a more radical version of their philosophy. They will say, “We’re not for that! We are democratic socialists!” as if the veneer of democracy blesses socialism’s multitudinous sins. The truth is this: disastrous policies are disastrous policies; it does not matter much that their advocates were voted in.

The track record of the 20th century brand of socialism often labeled “communism” is horrific—the worst mass murdering “cause” in world history. The Black Book of Communism documented its crimes, including the murder of more than 100 million people.

“Democratic socialism” may be more seductive and less bloody but it too has a miserable track record. Like its nuttier communist cousin, it consumes lives and wealth and must sooner or later be administered the capitalist antidote. If countries embrace democratic socialism and stay afloat, their longevity is always explained not by the socialism they adopt, but rather, by the capitalism they have not yet destroyed. And the more a country drowns itself in democratic socialism, the more the democracy part evaporates in the face of concentrated state power.

Socialists and socialism possess no theory of wealth creation; indeed, they show no interest in it. Wealth is just “there” for them to vilify, confiscate and redistribute—until its producers produce no more. Long-term thinking is not their strong suit.

The next time you hear a democratic socialist declare that his system hasn’t been tried yet, reel off this list for starters (for more, check out the recommended readings below):

Ancient Rome’s Republic began its deadly experiment in democratic socialism in the 2nd Century B.C. It began as a welfare state, degenerated into a regulatory nightmare and finally collapsed into an imperial autocracy. Legislative assemblies voted into office by the Roman electorate constructed the socialist edifice brick by brick. Rome was not built in a day, but concentrated state power had no trouble tearing it down completely.

The Pilgrims of Plymouth, Massachusetts famously tried another version of democratic socialism seventeen centuries later. It was the communal variety, in which they placed the fruits of their labors into a common storehouse and then distributed it to each other equally. Their Governor was elected, by the way, which made it democratic. Starvation forced them to scrap it rather quickly in favor of private property.

Adolf Hitler’s National Socialists came to power through the democratic process in 1933. Oops, back to the drawing board for socialists on that one too!

After World War II, Great Britain voted the democratic socialists into power and turned the country into “the Sick Man of Europe.” Margaret Thatcher administered a strong dose of capitalism 30 years later, before the patient would have expired.

Scandinavia adopted the welfare state version of socialism around the same time as Britain. Economic decline set in as it took hold. But Norwegians, Danes and Swedes learned much from their mistakes and reversed many of them. Today, their economies are among the freest in the world.

New Zealand found itself mired in the doldrums of democratic socialism by the 1980s but recovered dramatically through drastic reductions in government. (See New Zealand’s Path to Prosperity Began With Rejecting Democratic Socialism.)

On and on it goes, like a broken record. Socialists make big promises, wrap them in velvet, and beat the economy into submission using the iron fist within. Then when its victims have had enough, capitalism must come to the rescue.

Wouldn’t it make a lot more sense to simply avoid the socialist trap in the first place?

Private Ownership: A Must by Henry Hazlitt

The Soviet Tragedy: A History of Socialism in Russia, 1917-1991 and Russia Under the Bolshevik Regime by Richard Pipes, Martin Malia and Ralph Raico

Margaret Thatcher on Socialism: 20 of Her Best Quotes by Lawrence W. Reed

The British Parliamentarian Who Jumped Ship from Socialism by Lawrence W. Reed

Socialism on My Mind by Lawrence W. Reed

61 Quick Facts and Observations on Socialism, Jesus and Wealth by Jon Miltimore

A Revolution to Always Remember but Never Celebrate by Lawrence W. Reed