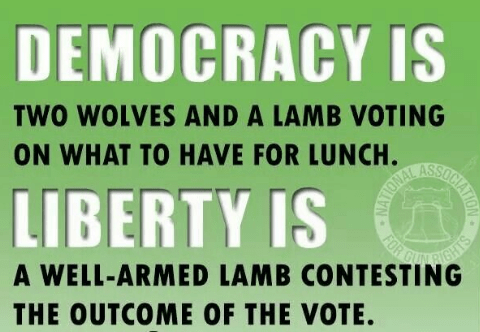 OPINION: It is the ideals of liberty which force democracy to be fair and good, not the other way around.

Translator’s note: This is a slightly loose translation of the original.

In particular, we have sometimes replaced the word ‘liberalism’ in the original French for terms such as the ‘ideals of liberty’. Unfortunately the word ‘liberalism’ has got all the wrong meanings in English speaking circles. For the true meaning of liberalism, please read Mises’ Liberalism in the Classical Tradition.

The term liberal democracy has become so commonplace, so overused and over the top that it is more than easy to confuse the two terms: democracy and liberalism. As if liberalism inevitably implied a democratic regime and vice versa.

The confusion is sufficiently maintained by the media and the political class, to the point that in the United States, the two words have become almost synonymous and members or supporters of the Democratic Party are commonly called liberals.

That would be accepting a fallacy that ultimately suits many people, starting with politicians who are quick to wrap themselves in a strong aura of the defense of freedoms.

The Master and the Subject

But make no mistake, democracy is nothing more than a model of a political regime which institutionalizes the rules of decision making within a community: rules of majority, of representation, rules fixing the extent and the duration of mandates, modalities of decision making, etc.

But it would be a huge mistake to believe that any regime can have a purpose other than exercising and protecting its own sovereignty.

All political regimes are made to reign supreme over society, and democracy is no exception.

Power remains power: having the last word when it comes to making a decision and asserting oneself by force if necessary.

Restricting the Scope of Power

This vision is diametrically opposed to the foundations of liberalism, which, far from defining which power would be best able to lead citizens, claims to force power to respect law and morality. It is for this very reason that classical liberalism is so decried by its opponents.

Liberty is not the definition of power, but the restriction of it.

One of the first (if not the first) liberal texts, John Locke’s ‘A Letter Concerning Toleration‘, thus explains that religious modalities must remain outside the sovereign’s realm of authority.

One of the first (if not the first) liberal legal texts, the Magna Carta, establishes that civil courts do not have unlimited powers.

The characteristic of liberalism is exactly there. It is about restricting the scope of the master and of his laws and ensuring that these laws respect a certain number of principles:

The exercise of power must be at all times subject to consent and can be called into question at any time.

Power is only desirable when it is able to prove its added value, which, moreover, is very difficult to establish outside of activities that regulate the use of violence.

Above all, it is upto those who exercice power to follow standards, laws, obligations and prohibitions. And not only laws that must be written to ensure their permanence, but above all laws which must be in accordance with morality and justice, what the classical liberals call natural law.

It is not upto the State to establish or define natural rights. This is totally impossible and meaningless. Natural law does not depend on the State but on the very nature of the human being as an individual.

It is the State’s obligation to respect natural law, to respect the fundamental rights of individuals, their legitimate aspirations and their dignity as human beings.

Any power which contravenes respect for this natural law would by its very nature be illegitimate.

Classical liberalism goes to the point of questioning the need for the very existence of the State and the possibility of replacing it as soon as possible with other social components: trade, information sharing, the autonomy of citizens, etc.

It is this liberalism that requires democracy to be fair and good, not the other way around. In the same way, it is the ideals of liberty which require that all power be, before anything else, respectful of human nature.

Make no mistake about it, especially in a period which is becoming more and more troubled, as we have imposed more rules and constraints.

We have imposed these constraints not in the name of law and morality, but in the name of a mathematical formula diverted for partisan interests, a formula which would fix once and for all the rules for the designation of power according to a pseudo social contract that no one has ever signed.

Make no mistake about it and above all, let us be vigilant: let us ensure that the State remains in its place. Or rather that it return to its proper place as quickly as possible, because for a long time our liberal democracies have become organs of manipulation and the exemption from power, not to mention less and less liberal.