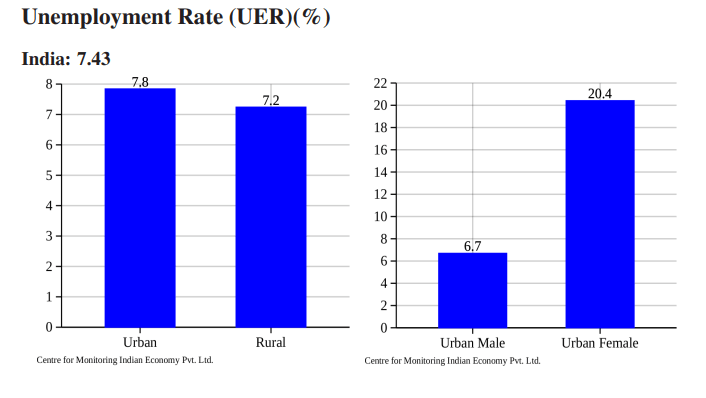 Before the mindless covid lockdown was imposed by the Modi government in March 2020 the unemployment rate in India was already at a 45 year high. Post lockdown the unemployment rate has sky rocketed and last April it was 7.83%. The latest CMIE report presents a very grim scenario of the Indian labor market. It says,

To make matters worse during India’s job creation problem, another issue that the economy is dealing with right now is that a growing number of people are no longer even looking for work.

Frustrated due to the lack of jobs, millions of Indians, especially women, are exiting the labour force entirely …

India is depending on young workers to drive growth in one of the world’s fastest-expanding economies, and the latest numbers do not look appealing. Between 2017 and 2022, the overall labour participation rate dropped from 46 per cent to 40 per cent. Among women, the data is even starker. About 21 million disappeared from the workforce, leaving only 9 per cent of the eligible population employed or looking for positions.

Now, more than half of the 900 million Indians of legal working age — roughly the population of the US and Russia combined — don’t want a job.

This is truly frightening. The combined population of both US and Russia in India do not want any job! They are so discouraged by the grim prospects they face in the difficult Indian labor market that they have stopped looking for a job and instead decided to sit at home and become dependent on their parents’ income. Not only this, most of the Indian youth are not capable of doing the jobs that are available in the market. As recent Mohandas Pai report said, India has already lost its so-called demographic dividend because,

Let us see what’s causing this massive unemployment problem. First, why did I say this crisis is manufactured? There are strong economic reasons for me to say this. Basic economics tells us that involuntary unemployment in a free market economy is simply not possible. Labor is a scarce factor of production, like all other factors of productions such as land, capital, time, and entrepreneurship, and so it will always be in demand for its use to manufacture the trillions of consumer goods items that we consume in our day to day lives. A simple example will illustrate this fact. Let us say on an average an individual uses 10 different consumer goods in his daily life. The world population is around 7.9 billion people so if we multiply 7.9 billion with 10 average items then daily we need to produce around 79 billion goods. To produce these goods, we have a limited amount of labor services available, as can be seen in the workforce participation rate data below.

In such circumstances unemployment simply is impossible, and such a high level of unemployment in India is grotesque and demands explanation. As far as unemployment is concerned remember what David Ricardo said, demand is never a problem; supply is. It means, consumer demand is always present but something goes wrong with the production side of the economy which results into unemployment. So what happened on the production side of the Indian economy? So much. After coming to power the Narendra Modi’s BJP government imposed a thoughtless currency ban (demonetization) which threw a big monkey wrench in the production structure of the economy. Money is the life blood of an economy. It smooths every exchange that is taking place in the economy and allows the crucial system of division of labor and specialization to work seamlessly for an efficient production of consumer goods. Without money, exchanges cannot take place and the economy will basically come to a standstill. That is what exactly happened during demonetization. That jolt to the economy unemployed millions of people. As if that was not enough BJP government then implemented a nationwide GST regime, which again devastated the production structure of the economy. Producers were forced to fill the confused and complicated online GST return forms instead of focusing on their production processes. That added to the swelling number of unemployed people in India. GST increased the cost of doing business for entrepreneurs so they fired many employees to reduce their cost. Then came the biggest jolt of all in the form of total lockdown of the economy to supposedly stop the spread of a virus which, after two years, has only infected some 1% of the Indian population. That mindless lockdown completely halted the economy for months. Many of those who lost their jobs and livelihood during that lockdown haven’t been able to get back anything. Workers have stopped looking for a job as jobs are either not available or if they are available they do not have the adequate skills to perform those jobs.

India’s unemployment crisis thus is a result of governmental – congress or BJP or any other because they all are same – socialist policies of controlling and regulating the economy. Without government wrecking the economy, there would be plenty of quality jobs for everyone who wants to do them.

And above all, as Henry Hazlitt said, unemployment is not a bigger problem for India; lack of production is. As I have mentioned elsewhere, the goal of life is not to work. Without government stealing our savings in the form of taxation and inflation, the capitalist economy will produce more than enough for everyone so that no one will have to work like a donkey.

All the problems of India can vanish within days if Indians decide to abolish their government and choose freedom over governmental slavery. But this isn’t an easy task as that process requires conducive gene-culture environment which India doesn’t have. So the misery of Indians will not only continue but increase many fold as time goes by.