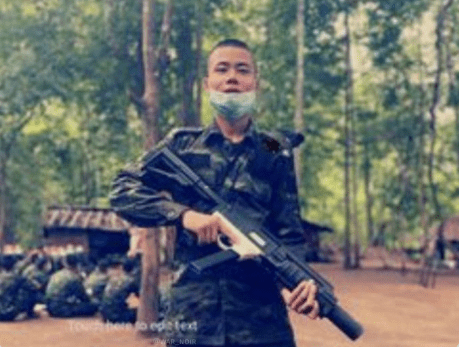 Incredible. This is a photo of a rebel in #Myanmar / #Burma armed with JStark’s FGC-9, a 3D-printed gun. The fighter is a member of the People’s Defence Forces, who’re currently fighting the authoritarian military junta.

Another image apparently from #Myanmar / #Burma showing an anti-junta rebel with J-Stark's FGC-9 MkII 3D-printed gun. I think it's really remarkable to see this used by insurgents in the midst of a conflict against a brutal authoritarian force.

Another image of the FGC-9 in #Myanmar / #Burma. This time it's equipped with a sight.

Ironically enough, the biggest implementation of the FGC-9 so far is the one many said was a cop out—that is JStark’s idea that rebel forces could produce these to fight totalitarian regimes. Interesting development.

An image of what is allegedly anti-junta rebels in #Myanmar / #Burma working on a hybrid 3D-printed FGC-9, adding a longer barrel for better velocity on a 9mm round (or so I’m told).

Here’s a current news item that highlights how open source software changes the game theory of physical conflict; rebels in Myanmar arming themselves against the military junta with 3D printed guns. Admittedly, I haven’t been following the developments of the unfolding situation in Myanmar. I do, however, vividly remember the video of the woman recording a calisthenics routine as military vehicles rushed behind her en route to initiating a coup against the incumbent government. (Going back and rewatching this clip (below) is making me think it is a top three video depiction of the clown world we are currently living in.) :

While I have not gathered have enough information to speak confidently about what has been and is currently going on in Myanmar, I do think it is a pretty big deal that a rebel force is arming itself with weapons that are being 3D printed using open source designs. Stories of this happening are beginning to pop up just a couple of months following the sudden death of JStark, the pseudonymous creator of the FGC-9 (Fuck Gun Control-9) being used in Myanmar. The power of open source code – regardless of your perception of that power as a net positive or negative – is being shown in real time. If they aren’t already, one must factor much cheaper and widely available combat tools that manifest themselves in both the physical and digital worlds into their threat models. Pandora’s box has been opened and there is no turning back.

Whether the rebel forces are virtuous working class people fighting to take back their land, an army funded and armed by the CIA in the name of “nation building”, or something in between doesn’t matter. What matters is this new variable that forces players within the game of meatspace conflict to change their understanding of that game on the go.

How does the likelihood of physical conflict adjust when all players are forced to consider that any potential adversary may be sufficiently armed? Or when a previously unarmed mass of united people can easily mass produce combat weapons? Will parties be more likely or less likely to engage in direct combat? Will oppressed people’s be able to more easily arm themselves in defense?

Some of these questions are being answered at this very moment. This will be a very interesting story line to follow as the situation in Myanmar progresses.

And, again, I must stress that it is important to try to take the emotion out of the analysis of 3D printed guns and their impact on society. Whether you view the impact of their existence as positive or negative doesn’t really matter. What matters is that there is an impact and – whether you like it or not – that impact will adjust reality. Trying to wish it away will likely do little to change that.