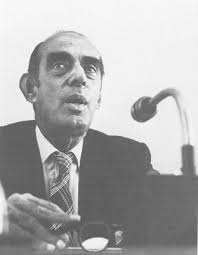 Minocher Rustom Masani, (Minoo Masani as he was better known), author, activist in India’s struggle for freedom, parliamentarian and a member of the Constituent Assembly, was free India’s most eminent Liberal.

Author of Our India, an all-time bestseller and a prescribed texbook in schools even in pre-independence India (the book was withdrawn when he parted company with Pandit Jawaharlal Nehru and the then Establishment), Minoo Masani was an almunus of Bombay’s Elphinstone College, the London School of Economics and Lincoln’s Inn. He joined the Bombay Bar but soon gave up practice to participate in the freedom struggle. He courted imprisonment in1932 and 1933. He joined Jayaprakash Narayan, Achyut Patwardhan, Yusuf Meherally and others to form the Congress Socialist Party (CSP) and became its Joint Secretary. He was elected to the Bombay Municipal Corporation in 1943 and, at 38, was its youngest Mayor, a record that was broken only in the 1990s.

An admirer of the Soviet Union in his student days as he visited that country in the late ‘twenties when he was a student at the LSE and later as Secretary of the CSP. The early ‘thirties were the period of Stalin’s purges of his rivals in the CPSU and the liquidation of millions of farmers who opposed his policy of forced collectivization of farms. Horrified by Stalin’s brutality, Masani’s disenchantment with Soviet communism led to his questioning the credentials of the Indian communists. He strenuously resisted communist attempts to infiltrate and capture the CSP. Unable to convince the majority of his colleagues in the CSP to support him he resigned along with Ram Manohar Lohia, Achyut Patwardhan and Asoka Mehta . A year later, the communists were expelled from the CSP. His disillusionment with Soviet communism led him to question marxist dogma and to a rethinking of his socialist beliefs. The result was his well known essay ‘Socialism Reconsidered’.

The freedom movement was gathering movement and when Gandhiji launched the ‘Quit India Movement’, Masani who was then an employee in the Tata organisation , resigned his job, volunteered himself as a satyagrahi, courted imprisonment and found himself with other Congress leaders in Nasik jail.

On his release from jail, Masani entered legislative politics and to membership of the Indian Legislative Assembly. which was later converted into the Constituent Aseembly. He played his role in the drafting of the Indian Constitution as a member of he Fundamental Rights Sub-Committee and Union-Powers Committee.

Following his renunciation of socialism it was only logical for Minoo Masani to start thinking of an alternative to socialism and an economic system for independent India. His was a middle-of-the-road recipe – a mixed economy in a free and open society. This was the theme of a series of lectures he delivered in 1947 to the Bombay University’s School of Economics which were later published under the title “Plea for a Mixed Economy”.

Nominated by the Government of India as representative on the UN Sub-Commission on Minorities, Masani invited prime minister Nehru’s wrath when he refused to turn a blind eye to the persecution of the minorities in the Soviet Union and its satellites in Eastern Europe. He was recalled and sent off in 1948 as India’s Ambassador to Brazil.

Those were the Cold War years when the Soviet Union sponsored front organisations to promote its interests worldwide. Several organisations were set up internationally to counter the Soviet challenge. One of these was the Congress for Cultural Freedom based in Paris. In India, Masani, along with Jayaprakash Narayan, Asoka Mehta and A.D.Gorwala took the initiative in establishing the Indian Committee for Cultural Freedom (ICCF) and affiliated it to the Congress in Paris. The ICCF was a non-party organisation of scholars, writers, artists and scientists to defend intellectual liberty, to cultivate a spirit of free enquiry and an appreciation of the arts.

Two years earlier he had founded, with the blessings and encouragement of the then deputy prime minister and home minister Sardar Vallabhbhai Patel, the Democratic Research Service to educate public opinion on the dangers to India’s national independence posed by communists who, acting under instructions from the Comintern in Moscow, were, in the early ‘fifties conducting a violent insurrectionary movement in Telengana in Andhra Pradesh.

His election to the Lok Sabha as an Independent from Ranchi in Bihar in 1957 signalled the beginning of his efforts to implement his thesis of a mixed economy and to combat the statist policies which went under the name of the Socialist Pattern of Society. In 1959 he joined C.Rajagopalachari to found the Swatantra Party which could broadly be described as a liberal-conservative party..

Masani was that rare combination – an intellectual with tremendous organising competence. During his tenure as general secretary , the Swatantra Party grew rapidly and in less than ten years emerged, in the 1967 general elections, as the single largest party in the opposition in the Lok Sabha with a strength of 44 members; leading a principled coalition government in Orissa; as the officially recognized opposition in the Rajasthan and Gujarat Assemblies; and with significant representation in the Andhra Pradesh and Tamil Nadu legislative assemblies.

As the party’s ideologue he was clear that the Swatantra Party should eschew non-parliamentary forms of protest like satyagrahas, morchas, bandhs and walkouts in the legislatures. He was largely influential in ensuring that the party did not form fronts in the trade union and student movements. Perhaps it was his insistence on discipline and doing the right thing that led to the party’s exit from electoral politics. In 1971 the so called ‘Indira wave’ swept all parties aside including the Swatantra Party. He accepted responsibility for the party’s miserable performance (he himself failed to retain his seat in the Lok Sabha for a third term from Rajkot), resigned from the presidentship of the party and from party politics.

His was an outstanding performance as member of the Lok Sabha between 1957 and 1971. He was chairman of the Public Accounts Committee of Parliament. As leader of the single largest party in the opposition he invariably opened the debate on the Finance Bill that follows the introduction of the Union Budget. Many of his speeches in parliament were later published under the title “Congress Misrule and Swatantra Alternative”. Masani kept a close watch on the attendance of members of his group and their behaviour. He firmly believed that occupying the opposition benches did not mean opposing for the sake of opposition. On many an occasion he supported the ruling party but did not hesitate in going against all other groups in the house if any issue warranted such action . Two instances that come to mind are the ‘liberation’ of Goa when he opposed India’s action on the ground that it was unnecessary and that the whole affair was an effort to ensure the communist Krishna Menon’s return to Parliament. The other was the abolition of Privy Purses . The Swatantra Party in Parliament was alone in opposing the move. The Party held that the abolition of privy purses went against solemn assurances given by Sardar Patel as Home Minister and recorded in ‘Instruments of Accession’.

Masani would often quote this verse to encourage his colleagues to treat issues on their merit without being worried about being isolated or being in a hopeless minority:

“They are slaves who dare not be,
In the right with two or three.”

He took over the editorship of Freedom First which he had founded in 1952. As editor he fought the censorship imposed during Mrs. Gandhi’s ‘Emergency’ and sought the court’s intervention against her censors in what came to be known as the Freedom First case. Though the court vindicated his stand he suspended publication as found that there were too many impediments to his exercising editorial freedom. Publication was soon after the Emergency was withdrawn. Freedom First is now published as a Quarterly and is generally regarded as Liberalism;’s authentic voice in India.

In 1978 when the Janata Party was elected to power he was appointed Chairman of the Minorities Commission but soon resigned over differences on principles and approach. Minoo Masani the socialist agitator in his ‘twenties became the Liberal par excellence whose contribution to the Liberal movement was acknowledged when he was honoured as a patron of the Liberal International. He was a secularist ( though he disliked the word preferring to call himself by the more cumbersome description ‘Non-denominationalist’) and an uncompromising champion of individual liberty .Starting out as a friend and supporter of Pandit Nehru he began to see in his later years the practical wisdom in Sardar Patel’s policies.

Though he had retired from politics he continued to be active in public life. In March 1968 he founded the Leslie Sawhny Programme of Training for Democracy to train young people in citizenship – to be conscious of their rights and their duties as citizens.

He founded the Society for the Right to Die with Dignity and enjoyed being in the centre of a minor storm when he campaigned for passive euthanasia for the terminally ill.

In 1985 he set up the Project for Economic Education in association with the Leslie Sawhny Programme and Prof.B.R.Shenoy’s Economic Research Centre to educate public opinion on issues relating to the economy in general and the economic reform programme that began in the ‘eighties, in particular.

Masani’s reputation as a man with a very high level of integrity in public life, was formidable. This quality by itself was enough to disqualify him from being a ‘successful’ politician where success is measured in terms of ministerial positions or other similar patronage-wielding offices.

He concluded his two-volume autobiography (which he wrote in 1981) with the observation:

“Since our politicians are by and large beyond repair, if India is to be saved, it will have to be saved by the small man, particularly the middle class of the cities and the landed farmers of the countryside who are the backbone of the nation. These classes have suffered cruelly under the so called ‘socialist pattern’ that Nehru imposed on the country and which is still rampant, but their back is still not broken. It is to these that I would look to save this country.”

He was happiest when surrounded by young people. Not surprisingly his first and last books were meant for the young. The first was Our India and the last was its sequel We Indians. If optimism exuded every page of Our India, We Indians was a confession of failure and a plea to the young to avoid the mistakes of his generation. In the concluding chapter in We Indians he wrote:

“We of my generation have made such a mess of our country’s affairs that, in my opinion, we have no right to preach to young folks…”

He was indeed the quintessential dissenter.

This brief biography is written by S.V.Raju, a close associate of Mr.Masani. An association that began in 1959 when Mr.Raju joined the Swatantra Party as Executive Secretary of the National Headquarters in 1959 and ended with Mr. Masani’s demise in 1998.

The country misses you Mr. Masani.