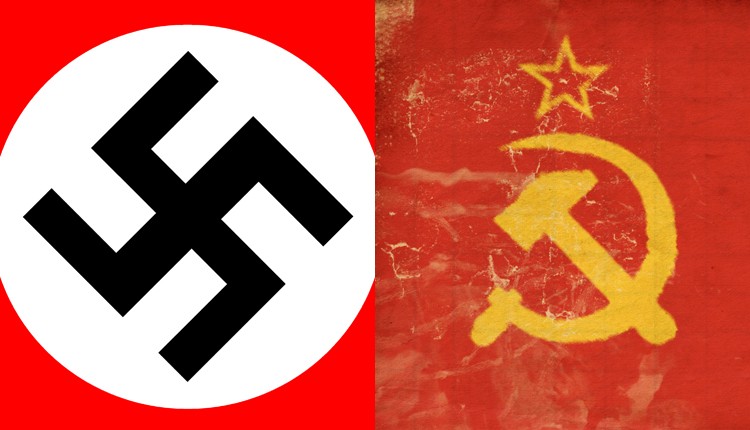 By Joshua Hofford on Fee.org

It has become fashionable to wear Che Guevara or red hammer-and-sickle t-shirts as a mode of social protest against the oppression of Western society. Those who fight the injustice of Western democracy often are readily accepted and celebrated throughout American academia as they don these symbols of resistance.

Would these same heroes of justice and equality wear shirts with the Nazi swastika or pose for a photo with a flag of the Parteiadler of the Third Reich? A negative response would indicate either willing hypocrisy or a blinded understanding and knowledge of history since Karl Marx and Frederick Engels are the fathers of both children: the swastika and the hammer-and-sickle.

The Socialist Inception of Karl Marx and Friedrich Engels

From its inception, advocates viewed “less civilized” peoples as obstacles to their revolution. Frederick Engels referred to the residual fragments of people who have survived in the cracks and crevices of European society without obtaining the status of capitalist. The Basques of Spain, the Gaels of Scotland, and the French Bretons, among others, were destined to perish in the “revolutionary world storm” that was sure to come.

Here are the precise words of Engels from the 1849 edition of Neue Rheinische Zeitung No. 194:

There is no country in Europe which does not have in some corner or other one or several ruined fragments of peoples, the remnant of a former population that was suppressed and held in bondage by the nation which later became the main vehicle of historical development.

These relics of a nation mercilessly trampled under foot in the course of history, as Hegel says, these residual fragments of peoples always become fanatical standard-bearers of counter-revolution and remain so until their complete extirpation or loss of their national character, just as their whole existence, in general, is itself a protest against a great historical revolution.

That this residual fragment, which is likewise extremely confused, sees its salvation only in a reversal of the whole European movement, which in its view ought to go not from west to east, but from east to west, and that for it the instrument of liberation and the bond of unity is the Russian knout — that is the most natural thing in the world. [emphasis added]

Not only did early socialism insist on the forced assimilation or destruction of lesser developed nations in a Darwinian struggle for existence, but the principle itself was also as much a part of the doctrine as Marx was a part of Engels and vice versa. In an 1859 pamphlet named “Rhine and Po,” Engels spelled out this concept. He stated:

No one will assert that the map of Europe is definitely settled. All changes, however, if they are to be lasting, must be of such a nature as to bring the great and vital nations ever closer to their true natural borders as determined by speech and sympathies, while at the same time the ruins of peoples, which are still to be found here and there, and are no longer capable of leading an independent national existence, must be incorporated into the larger nations, and either dissolve in them or else remain as ethnographic monuments of no political significance.

To be left as an inconsequential racial remnant would be one thing, but Engels went further when he commented on the inevitable counter-revolution and its solution.

The next world war will cause not only reactionary classes and dynasties but also entire reactionary peoples to disappear from the earth. And that too would progress.

The danger of leaving these “remnant people” alive was the counter-revolution they would be sure to bring, which was, according to Engels, an unacceptable threat to the socialist cause. Instead, these reactionary nations who rebel against the new socialist order should be destroyed to have only their names known to history. They would be forcibly assimilated or destroyed in the wake of the revolution, and Engels had little sympathy for them.

Eagerly awaiting the worldwide socialist revolution, early socialists were struck dumb when the workers of the world did not unite to throw off their chains during WWI. Instead, millions of working-class men took up arms to fight for king and country for a schilling and died by the millions on the Western Front, the great charnel house that still holds the lifeblood of forgotten generations. The post-war failure of socialism was realized around the world, save for the USSR under the control of the Communist Party and Nazi Germany under the National Socialist German Workers Party.

The platform for Soviet socialism was nearly identical to that of National Socialism under the Nazi Party. Though the application of Soviet socialism was Marxian in nature—committed to international socialist revolution and the elimination of class enemies—and National Socialism under the Nazi Party was instituted to the elimination of racial enemies, both were dedicated to the remaking of mankind through class struggle.

The New Soviet Man was to be created from the morass of the old Russian Empire and the scorching away of nationality, religion, and family loyalty in the kiln of forced revolution.

A new Soviet society would be sculpted, and state-controlled education, mass arrests of class enemies, and government-controlled media would be the tools used by Stalinist artisans. Similarly, the Nazi Party of the Third Reich, being at war with human nature as it is, was equally committed to the remaking of German society through the eugenics work of Dr. Josef Mengele and others.Not pure Marxists, the Nazis sought to create a new master race through the termination of racial enemies.

Endemic to both Soviet and Nazi socialism, the destruction of class and racial enemies was a literal, not figurative, stage of revolution. Whether it be dekulakization and destruction of generations-old buildings such as Christ the Savior Cathedral in Moscow in 1931, or the eradication of the “racially inferior” as under the Nazi Party, both versions of socialism were dedicated to constructing a new social reality by any means necessary and saw themselves as not so distant partners in the struggle.

These two socialist systems were so similar, in fact, that major leaders of the day often compared them favorably. While speaking at a public event in Berlin in 1925, Josef Goebbels compared communism and the Hitler ideal and noted that their differences were slight by comparison. Dr. Goebbels went on to say that Lenin was the “greatest man second only to Hitler,” which was meant to draw an alliance between the Communism of the USSR and the National Socialism of the Third Reich.

Similarly, Western leaders operated with the full understanding that the Hitler faith and that of Stalin were peas from the same pod. Winston Churchill viewed Communism and Nazism as breeding one another and alike in all major essentials. In 1937, Churchill compared compare Nazism and communism.

There are two strange facts about these non-God religions. The first is their extraordinary resemblance to one another. Nazism and communism imagine themselves as exact opposites. They are at each other’s throats wherever they exist all over the world. They actually breed each other; for the reaction against communism is Nazism, and beneath Nazism or fascism communism stirs convulsively.

Yet they are similar in all essentials. First of all, their simplicity is remarkable. You leave out God and put in the Devil; you leave out love and put in hate; and everything thereafter works quite straightforwardly and logically. They are, in fact, as alike as two peas. Tweedledum and Tweedledee are two quite distinctive personalities compared to these two rival religions.

Like two gems harvested from the same socialist strata, communism and Nazism varied only slightly in their application of Marxism, but were both were equally totalitarian in nature.

In addition to belonging to the shared brotherhood of worldwide socialism, clearly, both communism and Nazism were equally totalitarian. The Austrian economist Ludwig von Mises saw the similarity clear enough as he noted that German socialism worked toward a collective life in which government infringement on private life, with the time-honored aim of eliminating private property, did immeasurable harm to the population.

It’s true enough that socialism, by its design, is oriented toward total control; the economic and social philosophy of National Socialist German Workers’ Party and the Union of Soviet Socialist Republics are equally apparent. As Ludwig von Mises noted about Nazi Germany:

But in substance all enterprises are to become government operations. Under this practice, the owners will keep their names and trademarks on the property and the right to an “appropriate” income or one “befitting their ranks.” Every business becomes an office and every occupation a civil service. . . . Prices are set by government, and government determines what is to be produced, how it is to be produced, and in what quantities. There is no speculation, no “extraordinary” profits, no losses. There is no innovation, except for that ordered by government. Government guides and supervises everything.

The Nazis rejected the call to international revolution and the class warfare of their Soviet Marxist kin, however, this made them no less socialist. All substantial power and ownership of German business under the Third Reich, while managed and owned by individuals, was in the hands of the state.

Price controls, salary caps, and production quotas were set by the nation and left owners to navigate a glut of bureaucracy. Although the Nazis did not build or maintain a holistic command economy and thus were not traditional socialists after the Marxian model, the agricultural sector was set up, according to von Mises, in conformity with the “socialism of the German pattern.”

This can hardly be called a free market. The thin veneer of private ownership of German industry faded away under the endless tide of government interventionism, which only served to create shortages of essential goods and overproduction of superfluous non-essentials. In this way, the economic practice of the Nazis and Soviets was very similar.

The manikin of socialism was identical for the Nazis and Soviets. Doomed shawls of Soviet Marxism can be replaced with cursed vests of National Socialism, but each hid the rotten mask of the utopian paradise—one created from the hammer-and-sickle and swastika.