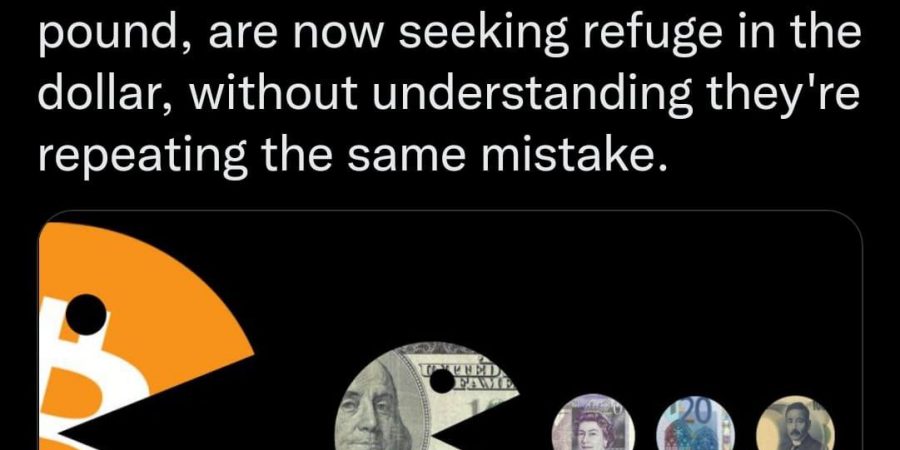 Let me see your bingo cards. I know one of you predicted that British pension managers would get margin called after a budget announcement from the new leadership. We now have our first major intervention of the cycle (sorry Bank of Japan, your intervention is considered permanent), and global markets are giving us some very important signals as a result.

In the wee hours of the morning here on the west coast, we saw the first central bank capitulation after this year’s amplified volatility:

I didn’t know where it would come from, although almost certainly from abroad, but I could feel it in the air on Monday morning. Especially considering the moves in the US dollar versus its counterparts. The waft of bailout stayed with me in my dreams on Sunday evening:

Nik Bhatia @timevalueofbtcintervention week is upon us, these are not the types of market moves that usually precede extreme tightening, they precede “ackchually…” statements from policy makersSeptember 26th 20228 Retweets72 Likes

Back to the British bailout this morning. Why did the BoE have to step in to protect the UK government bond market? Falling prices (rising yields) had created a doom loop for pension managers. But not just any pension manager. BlackRock. The privilege of being a “too big to fail” institution shouldn’t be lost on any readers, as large banks and asset managers have repeatedly called on central banks for a lifeline since 2007. It is the status quo. Here’s the punchline from Bloomberg:

“The BOE intervention was required to prevent a vicious cycle becoming even more dangerous for pension funds forced to sell their gilt exposures,” Calum Mackenzie, an investment partner at Aon, said after the BOE intervention. “The market’s swift and significant reaction underlined the big risk faced by pension funds who have had or who could have had their liability hedges reduced.”

Firms including BlackRock Inc., Legal & General Group Plc and Schroders Plc manage LDI funds on behalf of pension clients. The pension firms use them to match their liabilities with their assets, often using derivatives.

Then, the intervention hit the market a few hours later as the BoE purchased its first tranche of government bonds:

And the LOL reaction from 30-year UK yields:

Of course, markets around the world eased their worries in sympathy with the BlackRock bailout, as financial market participants silently rejoiced that asset managers would always be protected in a crisis. We believe that more bailouts will come from around the world, even if an ultimate one from the Fed is unlikely in the current environment. More on the Fed right now.

What else is starting to crack?

In a recent video, we discussed why the Fed hasn’t even considered pausing rate hikes yet, including stable money markets. Only 13 days later, and the rally in the dollar has unleashed some funding stress, as we can see here in the spread between Eurodollar funding and on-shore funding levels: