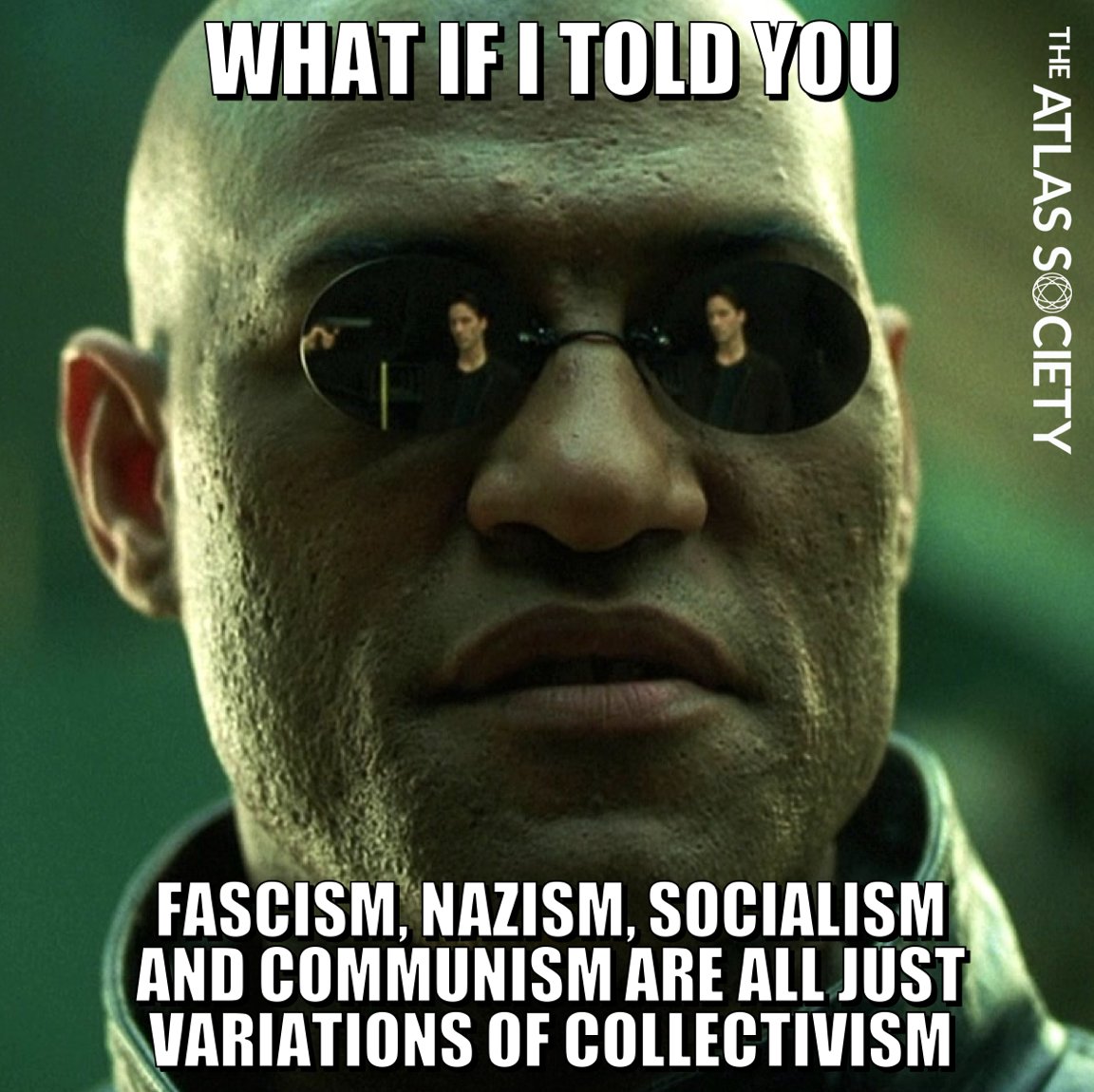 By Daniel J. Mitchell on Fee.org

I’ve written about how totalitarian ideologies such as communism and Nazism have a lot in common. Both subordinate the individual to the state and both give the state power over the economy.

And both slaughter millions of people.

My buddy from grad school, Matt Kibbe, has a great video on this issue.

Needless to say, I agree with Matt’s characterization.

The battle is not right vs. left. It’s statism vs. individualism.

Let’s look at some writings on this issue.

We’ll start with an article by Bradley Birzer, published by Intellectual Takeout. He worries that totalitarianism on the left is making a comeback.

In 1936, you had three choices: National Socialism, international socialism, or dignity. In 2018, we find ourselves in similar circumstances… Why is this happening now…?  First, we scholars have failed to convince the public of just how wicked all forms of communism were and remain. …Almost all historians ignore the most salient fact of the 20th century: that governments murdered more than 200 million innocents, the largest massacre in the history of the world.

Terror reigned in the killing fields, the Holocaust camps, and the gulags. …Second, an entire generation has grown up never knowing such things as the Soviet gulags or even the Berlin Wall. …most younger defenders of communism buy into the oldest propaganda line of the Left—that real communism has never been tried.

He explains that fascism and socialism are two sides of the same coin.

That the National Socialists embraced socialism is factually accurate. …they did nationalize very vital industry in Germany, even if by outright intimidation rather than through the law. In his personal diaries, Joseph Goebbels wrote in late 1925: “It would be better for us to end our existence under Bolshevism than to endure slavery under capitalism.” Only a few months later, he continued, “I think it is terrible that we and the Communists are bashing in each other’s heads.”

Whatever the state of the rivalry between the two camps, Goebbels claimed, the two forces should ally and conquer. …The Italian fascists had even closer ties to the Marxists, with Mussolini having begun his career as a Marxist publicist and writer. A few Italian fascists even held positions in the Comintern.

Richard Mason makes similar points in a piece he wrote for the Foundation for Economic Education.

…how do we react to the hammer and sickle? I don’t have to write an article explaining the millions of deaths that occurred at the hands of communist regimes; like the Holocaust, the gulags of the Soviet Union and killing fields of Cambodia are widely known. Yet journalists in the UK openly and proudly advocate communism. Statues of Karl Marx are erected. …there is no justifiable way a fascist could argue ‘That wasn’t real Nazism.’ The same is not true for communism. …Since Karl Marx never implemented communism himself, the leaders of communist states always have that get-out-of-jail-free card.

Any shortcomings, tragedies, or crises a communist regime faces can always be blamed on a misapplication of Marx’s infallible roadmap… The communist ideology in its purest form might be separated from its implementations, but at what point does its awful track record discredit any attempts to advocate it? …The history of communism is as bloodstained as that of Nazism; much more so, actually. It’s time we treated it as such.

Amen. I’ve weighed in on that issue, and I strongly recommend what Jeff Jacoby wrote on the issue as well.

And Sheldon Richman expands on this theme.

…fascism is socialism with a capitalist veneer. The word derives from fasces, the Roman symbol of collectivism and power: a tied bundle of rods with a protruding ax… Where socialism sought totalitarian control of a society’s economic processes through direct state operation of the means of production, fascism sought that control indirectly, through domination of nominally private owners. …Where socialism abolished all market relations outright, fascism left the appearance of market relations while planning all economic activities. Where socialism abolished money and prices, fascism controlled the monetary system and set all prices and wages politically.

He explains the vast gulf between capitalism and fascist economics.

…Entrepreneurship was abolished. State ministries, rather than consumers, determined what was produced and under what conditions. …Fascism is to be distinguished from interventionism, or the mixed economy. Interventionism seeks to guide the market process, not eliminate it, as fascism did. …Under fascism, the state, through official cartels, controlled all aspects of manufacturing, commerce, finance, and agriculture.

These are not new observations. Here’s what Ludwig von Mises wrote on this topic back in the 1940s.

The Marxians have resorted to polylogism because they could not refute by logical methods the theories developed by “bourgeois” economics, or the inferences drawn from these theories demonstrating the impracticability of socialism. As they could not rationally demonstrate the soundness of their own ideas or the unsoundness of their adversaries’ ideas, they have denounced the accepted logical methods. …The German nationalists had to face precisely the same problem as the Marxians.

They also could neither demonstrate the correctness of their own statements nor disprove the theories of economics and praxeology. Thus they took shelter under the roof of polylogism, prepared for them by the Marxians. Of course, they concocted their own brand of polylogism. …Neither Marxian nor Nazi polylogism ever went further than to declare that the logical structure of mind is different with various classes or races. …Polylogism is not a philosophy or an epistemological theory. It is an attitude of narrow-minded fanatics.

Given the various articles cited above, this meme from The Matrix is spot on.

Well, we now know what happens when someone learns about the common characteristics of statist ideologies. The Daily Caller has a report on a student who got very upset after learning that the National Socialist Workers Party was… yes, socialist.

Social justice warrior and history major Shelby Shoup was arrested for throwing chocolate milk at a fellow student and College Republican tabling at Florida State University while saying “Nazis weren’t socialists.” She has been charged with battery.

Since we’ve detoured into humor, this is a good opportunity to share this satire from the clever folks at the Babylon Bee.

At a press conference on Thursday, American Nazi Party leader Emmett Scoggins told reporters that his group is not trying to instate full-on Nazism, but a much better system called “democratic Nazism.” …Scoggins was questioned about the use of the word “democratic” and how democratic Nazism was any different from plain-old Nazism. “The main difference is we add the word ‘democratic’ on there because people like that word a lot more than just plain ‘Nazi,’” Scoggins said. …The conference ended with a long speech from Scoggins about…how “real” Nazism has never been tried.

I’ll close with my amateur attempt to classify various ideologies.

In the above video, Matt used a circle.

I’m wondering if a triangle makes more sense, with freedom at the top and totalitarianism at the bottom.

Here are a couple of additional observations on the triangle.

P.S. I like to think that there aren’t any civilized people willing to tolerate the Nazi ideology. But I do worry the same can’t be said about communism. The head of the European Commission recently helped celebrate Marx’s birthday, companies like Mercedes-Benz glorify racist murderers in their advertising (part of the Che death cult), and even symphonies use communist symbols.

How high does the death toll need to get before people realize that communism, like its sister ideology of Nazism, is despicably evil?