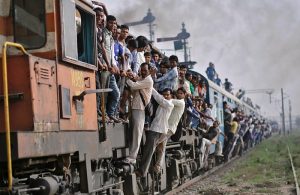 Indian Railways carries 22.21 million passengers daily and 8.107 billion annually. Local Train (Suburban) passengers carried per day: 11,126,027 (1.1 crores). On an average, a passenger travels 19 km a day for every existing route track kilometer. At any given time, 5% of India’s population is on the move on its trains.

It might not be an overstatement to remark that railways remains essentially the lifeblood of the Indian economy and its people, yet despite such an overwhelming majority of people using trains, the services provided by railways in India continues to remain dismal and sad. Be it the clogged and dirty washrooms without gender specificity or the ever existing and all pervasive delays or the poor quality goods, a service which touches the lives of billions of Indians continues to fail its users everyday.

While the service continues to remain poor, the fares charged to its customers have steadily increased over the past years, this implies that the value received by consumers per unit of their money spent continues to remain in decline. The increase in fares is done in part to compensate for the ever increasing costs of this public sector enterprise. Officially, the Operating ratio (OR) of the Indian Railways is around 96% in 2020-21. The official OR is understated. In reality, the Government has not taken into account full pension payments for the railway officials.

This has been done deliberately to keep the Operating Ratio (OR) lower. Going forward, in the future, on one hand, the overall expenses of the Railways are set to increase due to implementation of the 8th Pay commission (2025-26). While on the other hand, the Indian Railways has been losing its share of freight and passenger traffic leading to decline in overall revenue. Hence, the higher Operating Ratio (OR) would severely constrain the ability of the Railways to make higher investment in enhancing the overall capacity. The Finance Minister has stated a while back that Indian railways would need an investment of around Rs 50 lakh crores between 2018 and 2030. This number is sure expected to have grown over the time passed.

Therefore while Union Railways Minister Ashwini Vaishnaw said that the government has no plans to privatize the Indian Railways, the heavy costs of investments with little or no return in a service which provides consistently low quality to its users is an inapt use of the taxpayer’s money and goes against every grain of fiscal prudence.

The complete overhaul from a complete public sector enterprise to a purely governed private sector in a single go is unreasonable given the nature of heavy costs associated with the transition and heavy entrenchment of bureaucracy and politics associated with it. What can essentially be done is the establishment of a setup where the services inside as well as running of the train is governed by private entities while the government remains the owner of the trains itself.

This solution, which allows the government to retain ownership over trains and its tracks, would increase its revenue while cutting down its cost, as private firms in competition with each other for passengers will provide both better quality at a lower cost. This result is borne out of the nature of competitive markets. We can imagine a train which runs on six consecutive days in a week. The six slots on these days can be offered to various different firms whereby given monopoly rights are not granted by the government and competition is pursued.

Each firm will be in competition with each other to get other’s passengers as it wants more money and higher profits for the same fixed costs it runs daily. Each firm in pursuit of profits will look to provide better services to its consumers like delay free journeys, clean and hygienic trains and toilets as well as good quality food to attract the rival firm’s consumers. As competition gets more intense, the firms, given the price sensitive nature of railway commuters, will look to charge a marginally lower price than their competitors in order to win over more consumers and gain higher profits.

This result will make everyone better off : the commuters will overtime benefit from a greater value of their money spent in terms of better experience in their journeys, the firms will tap into a huge reservoir of consumer spending and will get the opportunity to earn profits. Finally, the government’s heavy load and burden will reduce a bit by this effective solution.

Vibhu Vikramaditya is an economics and a libertarian scholar with research interests in capital theory, monetary theory, and business cycles. He writes about events in the economy from a legal and economic standpoint with a proliberty outlook and believes that safeguarding the liberty and rights of each individual is the most important act toward peace, prosperity and growth. His other works can be found at the Austrian Economics Center, Mises.org the Libertarian Institute, and beinglibetarian.com.