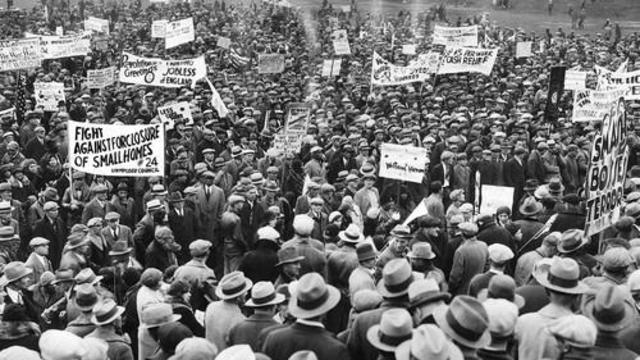 The 1920-1921 depression was a textbook example of how to handle an economic downturn.

By Robert P. Murphy on Fee.org

When it comes to diagnosing the causes of the Great Depression and prescribing cures for our present recession, the pundits and economists from the biggest schools typically argue about two different types of intervention. Big-government Keynesians, such as Paul Krugman, argue for massive fiscal stimulus—that is, huge budget deficits—to fill the gap in aggregate demand. On the other hand, small-government monetarists, who follow in the laissez-faire tradition of Milton Friedman, believe that the Federal Reserve needs to pump in more money to prevent the economy from falling into deep depression. Yet both sides of the debate agree that it would be utter disaster for the government and Fed to stand back and allow market forces to run their natural course after a major stock market or housing crash.

In contrast, many Austrian economists reject both forms of intervention. They argue that the free market would respond in the most efficient manner possible after a major disruption (such as the 1929 stock market crash or the housing bubble in our own times). As we shall see, the U.S. experience during the 1920–1921 depression—one that the reader has probably never heard of—is almost a laboratory experiment showcasing the flaws of both the Keynesian and monetarist prescriptions.

Despite what many readers undoubtedly “learned” in their history classes as children, Herbert Hoover behaved like a textbook Keynesian following the 1929 stock market crash. In conjunction with Treasury Secretary Andrew Mellon, Hoover achieved an across-the-board one percentage point reduction in income tax rates applicable to the 1929 tax year.

Hoover didn’t stop with tax cuts to bolster “aggregate demand”—though analysts at that time would not have used the term. He also signed into law massive increases in the federal budget, with fiscal year (FY) 1932 spending rising 42 percent above 1930 levels. Hoover ran unprecedented peacetime deficits, which stood in sharp contrast to his predecessor Calvin Coolidge, who had run a budget surplus every year of his presidency. In fact, in the 1932 election, FDR campaigned on a balanced budget and excoriated the reckless spending record of the Republican incumbent.

It wasn’t merely that Hoover spent a bunch of money. He spent it on just the types of things that we associate today with Roosevelt’s New Deal. For example, he signed off on numerous public-works projects, including the Hoover Dam. Of particular relevance today is the Reconstruction Finance Corporation (RFC) established under Hoover, which quickly injected more than $1 billion to prop up troubled banks that had made bad loans during the boom years of the late 1920s—and this was when $1 billion really meant something.

It is true that Hoover eventually blinked and raised taxes in 1932, in an effort to reduce the federal budget deficit. Today’s Keynesians point to this move as proof that reducing deficits is a bad idea in the middle of a depression. Yet an equally valid interpretation is that it’s horrible to hike tax rates in the middle of an economic disaster. After the bold tax cuts pushed through by Andrew Mellon in the 1920s, the top marginal income-tax rate in 1932 stood at 25 percent. The next year, because of Hoover’s desire to close the budget hole, the top income tax rate was 63 percent. Given this extraordinary single-year rate hike, it is no wonder that 1933 was the single worst year in U.S. economic history. (For what it’s worth, the FY 1933 budget deficit was still huge, coming in at 4.5 percent of GDP. Despite the huge rate hikes, federal tax revenues only increased 3.8 percent from FY 1932 to FY 1933.)

So we see that the standard Keynesian story, which paints Herbert Hoover as a do-nothing liquidationist, is completely false. Yet Milton Friedman’s explanation for the Great Depression is almost as dubious. Following the stock market crash, the New York Federal Reserve Bank immediately slashed its discount rate—how much it charged on loans—in an attempt to provide relief to the beleaguered financial system. The New York Fed continued to slash its discount rate over the next two years, pushing it down to 1.5 percent by May 1931. At that time, this was the lowest discount rate the New York Fed had ever charged since the establishment of the Federal Reserve System in 1913.

It wasn’t merely that the Fed (along with other central banks around the world) was charging an unusually low rate on loans it advanced from its discount window. The entire mentality of central bankers was different during the early years of the Great Depression. Writing in 1934, Lionel Robbins first noted that during previous crises, the solution had been for central banks to charge a high discount rate to separate the wheat from the chaff. Those firms that were truly solvent but illiquid would be willing to pay the high interest rates on central-bank loans to get them through the storm. Firms that were simply insolvent, on the other hand, would know the jig was up because they couldn’t afford the high rates. Yet this tough love was not administered after the 1929 crash, as Robbins explained:

“In the present depression we have changed all that. We eschew the sharp purge. We prefer the lingering disease. Everywhere, in the money market, in the commodity markets and in the broad field of company finance and public indebtedness, the efforts of Central Banks and Governments have been directed to propping up bad business positions.”

We, therefore, see an eerie pattern. When it came to both fiscal and monetary policy during the early 1930s, the governments and central banks implemented the same strategies that the sophisticated experts recommend today for our present crisis. Of course, today’s Keynesians and monetarists have a ready retort: They will tell us that their prescribed medicines (deficits and monetary injections, respectively) were not administered in large enough doses. It was the timidity of Hoover’s deficits (for the Keynesians) or the Fed’s injections of liquidity (for the monetarists) that caused the Great Depression.

This context highlights the importance of the 1920–1921 depression. Here the government and Fed did the exact opposite of what the experts now recommend. We have just about the closest thing to a controlled experiment in macroeconomics that one could desire. To repeat, it’s not that the government boosted the budget at a slower rate, or that the Fed provided a tad less liquidity. On the contrary, the government slashed its budget tremendously, and the Fed hiked rates to record highs. We thus have a fairly clear-cut experiment to test the efficacy of the Keynesian and monetarist remedies.

At the conclusion of World War I, U.S. officials found themselves in a bleak position. The federal debt had exploded because of wartime expenditures, and annual consumer price inflation rates had jumped well above 20 percent by the end of the war.

To restore fiscal and price sanity, the authorities implemented what today strikes us as incredibly “merciless” policies. From FY 1919 to 1920, federal spending was slashed from $18.5 billion to $6.4 billion—a 65 percent reduction in one year. The budget was pushed down the next two years as well, to $3.3 billion in FY 1922.

On the monetary side, the New York Fed raised its discount rate to a record high 7 percent by June 1920. Now the reader might think that this nominal rate was actually “looser” than the 1.5 percent discount rate charged in 1931 because of the changes in inflation rates. But on the contrary, the price deflation of the 1920–1921 depression was more severe. From its peak in June 1920, the Consumer Price Index fell 15.8 percent over the next 12 months. In contrast, year-over-year price deflation never even reached 11 percent at any point during the Great Depression. Whether we look at nominal interest rates or “real” (inflation-adjusted) interest rates, the Fed was very “tight” during the 1920–1921 depression and very “loose” during the onset of the Great Depression.

Now some modern economists will point out that our story leaves out an important element. Even though the Fed slashed its discount rate to record lows during the onset of the Great Depression, the total stock of money held by the public collapsed by roughly a third from 1929 to 1933. This is why Milton Friedman blamed the Fed for not doing enough to avert the Great Depression. By flooding the banking system with newly created reserves (part of the “monetary base”), the Fed could have offset the massive cash withdrawals of the panicked public and kept the overall money stock constant.

But even this nuanced argument fails to demonstrate why the 1929–1933 downturn should have been more severe than the 1920–1921 depression. The collapse of the monetary base (directly controlled by the Fed) during 1920–1921 was the largest in U.S. history, and it dwarfed the fall during the early Hoover years. So we hit the same problem: The standard monetarist explanation for the Great Depression applies all the more so to the 1920–1921 depression.

If the Keynesians are right about the Great Depression, then the depression of 1920–1921 should have been far worse. The same holds for the monetarists; things should have been awful in the 1920s if their theory of the 1930s is correct.

To be sure, the 1920–1921 depression was painful. The unemployment rate peaked at 11.7 percent in 1921. But it had dropped to 6.7 percent by the following year and was down to 2.4 percent by 1923. After the depression, the United States proceeded to enjoy the “Roaring Twenties,” arguably the most prosperous decade in the country’s history. Some of this prosperity was illusory—itself the result of subsequent Fed inflation—but nonetheless the 1920–1921 depression “purged the rottenness out of the system” and provided a solid framework for sustainable growth.

As we know, things turned out decidedly different in the 1930s. Despite the easy fiscal and monetary policies of the Hoover administration and the Federal Reserve—which today’s experts say are necessary to avoid the “mistakes of the Great Depression”—the unemployment rate kept going higher and higher, averaging an astounding 25 percent in 1933. And of course, after the “great contraction” the U.S. proceeded to stagnate in the Great Depression of the 1930s, which was easily the least prosperous decade in the country’s history.

The conclusion seems obvious to anyone whose mind is not firmly locked into the Keynesian or monetarist framework: The free market works. Even in the face of massive shocks requiring large structural adjustments, the best thing the government can do is cut its own budget and return more resources to the private sector. For its part, the Federal Reserve doesn’t help matters by flooding the shell-shocked credit markets with green pieces of paper. Prices can adjust to clear labor and other markets soon enough, in light of the new fundamentals, if only the politicians and central bankers would get out of the way.