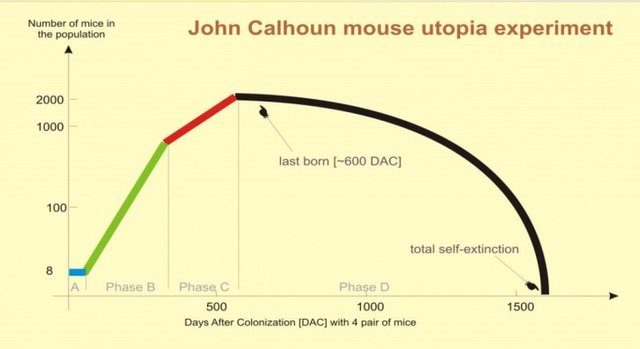 By Lawrence Reed on Fee.org

Signs in national and state parks all over America warn visitors, “Please Don’t Feed the Animals.” Some of those government-owned parks provide further explanation, such as “The animals may bite” or “It makes them dependent.”

It transforms wild and healthy animals into habitual beggars. Studies have shown that panhandling animals have a shorter lifespan.

What would happen if animals in the wild could count on human sources for their diet and never have to hunt or scrounge? What if, in other words, we humans imposed a generous welfare state on our furry friends? Would the resulting experience offer any lessons for humans who might be subjected to similar conditions? Not having to work for food and shelter sounds appealing and compassionate, doesn’t it?

These are fascinating questions that I am certainly not the first to ask. Because they require knowledge beyond my own, I cannot offer definitive answers. Readers should view what I present here as a prod to thought and discussion and not much more. I report, you decide.

Our personal pets live in a sort of welfare state. Moreover, for the most part, they seem to like it. My two rat terriers get free food and free health care, though I am not only their provider, but I am also their “master” too. In fact, my loving domination is a condition for the free stuff. It seems like a win-win, so maybe a welfare state can work after all. Right?

Let us avoid hasty conclusions. Perhaps the human/pet welfare state works because one of the parties has a brain the size of a golf ball or a pomegranate.

This is an area illuminated by ethology, the scientific study of animal behavior. One of the more famous ethologists in recent decades was John B. Calhoun, best known for his mouse experiments in the 1960s when he worked for the National Institute for Mental Health.

Calhoun enclosed four pairs of mice in a 9 x 4.5-foot metal pen complete with water dispensers, tunnels, food bins and nesting boxes. He provided all the food and water they needed and ensured that no predator could gain access. It was a mouse utopia.

Calhoun’s intent was to observe the effects on the mice of population density, but the experiment produced results that went beyond that. “I shall largely speak of mice, but my thoughts are on man,” he would later write in a comprehensive report.

At first, the mice did well. Their numbers doubled every 55 days. But after 600 days, with enough space to accommodate as many as another 1,600 rodents, the population peaked at 2,200 and began to decline precipitously—straight down to the extinction of the entire colony—in spite of their material needs being met with no effort required on the part of any mouse.

The turning point in this mouse utopia, Calhoun observed, occurred on Day 315 when the first signs appeared of a breakdown in social norms and structure. Aberrations included the following: females abandoning their young; males no longer defending their territory; and both sexes becoming more violent and aggressive. Deviant behavior, sexual and social, mounted with each passing day. The last thousand mice to be born tended to avoid stressful activity and focused their attention increasingly on themselves.

Jan Kubań, a personal friend of mine from Warsaw and a Polish biocybernetician, considers Calhoun’s experiment “one of the most important in human history.” He created The Physics of Life website where he elaborates on the meaning and significance of the ethologist’s work. About the final stages of the mouse utopia, Kubań writes,

Other young mice growing into adulthood exhibited an even different type of behavior. Dr. Calhoun called these individuals “the beautiful ones.” Their time was devoted solely to grooming, eating and sleeping. They never involved themselves with others, engaged in sex, nor would they fight. All appeared [outwardly] as a beautiful exhibit of the species with keen, alert eyes and a healthy, well-kept body. These mice, however, could not cope with unusual stimuli. Though they looked inquisitive, they were in fact, very stupid.

Because of the externally provided abundance of water and food, combined with zero threats from any predators, the mice never had to acquire resources on their own. The young mice never observed such actions and never learned them. The life skills necessary for survival faded away. As Kubań notes,

Utopia (when one has everything, at any moment, for no expenditure) prompts declines in responsibility, effectiveness and awareness of social dependence and finally, as Dr. Calhoun’s study showed, leads to self-extinction.

The “behavioral sink” of self-destructive conduct in Calhoun’s experiment (which he replicated on numerous subsequent occasions) has since been mostly interpreted as resulting from crowded conditions. Demographers warn that humans might succumb to similar aberrations if world population should ever exceed some imaginary, optimal “maximum.” Others like Kubań point out that the mice utopia fell apart well before the mouse enclosure was full. Even at the peak of the population, some 20 percent of nesting beds were unoccupied.

My instincts tell me that Kubań is correct in suggesting that a more likely culprit in the mice demise was this: the lack of a healthy challenge. Take away the motivation to overcome obstacles—notably, the challenge of providing for oneself and family—and you deprive individuals of an important stimulus that would otherwise encourage learning what works and what doesn’t, and possibly even pride in accomplishment (if mice are even capable of such a sentiment). Maybe, just maybe, personal growth in each mouse was inhibited by the welfare-state conditions in which they lived.

Calhoun himself suggested a parallel to humanity:

Herein is the paradox of a life without work or conflict. When all sense of necessity is stripped from the life of an individual, life ceases to have purpose. The individual dies in spirit.

By relieving individuals of challenges, which then deprives them of purpose, the welfare state is an utterly unnatural and anti-social contrivance. In the mouse experiment, the individuals ultimately lost interest in the things that perpetuate the species. They self-isolated, over-indulged themselves, or turned to violence.

Does that ring a bell? Read Charles Murray’s 1984 book, Losing Ground, or George Gilder’s earlier work, Wealth and Poverty, and I guarantee that you will hear that bell.

Or, if nothing else, ponder these prophetic words from one of the otherwise short-sighted, opportunistic architects of the American welfare state, Franklin Delano Roosevelt, in 1935:

The lessons of history, confirmed by the evidence immediately before me, show conclusively that continued dependence upon relief induces a spiritual and moral disintegration fundamentally destructive to the national fiber. To dole out relief in this way is to administer a narcotic, a subtle destroyer of the human spirit.

I can think of one big difference between Calhoun’s mouse utopia and the human welfare state, and it does not weigh in humanity’s favor. For the mice, everything truly was “free.” No mouse was taxed so another mouse could benefit. In the human welfare state, however, one human’s benefit is a cost to another (or to many)—a fact that rarely acts as an incentive for work, savings, investment, or other positive behaviors. That suggests that a human welfare state with its seductive subsidies for some and punishing taxes for others delivers a double blow not present in mouse welfarism.

To what extent do the mouse utopia lessons apply to we humans? I would be careful about drawing sweeping conclusions. I am reminded, however, of these words from economist Thomas Sowell: “The welfare state shields people from the consequences of their own mistakes, allowing irresponsibility to continue and to flourish among ever wider circles of people.”

We should not need mice or other animals to teach us that, but perhaps they can.

The Mouse Utopia Experiments: Down the Rabbit Hole (video)

The War on Poverty Wasn’t a Failure—It Was a Catastrophe, by Louis Woodhill

Thomas Sowell on the Legacy of the Welfare State, (video)

12 Reasons to Oppose the Welfare State, by Bryan Caplan