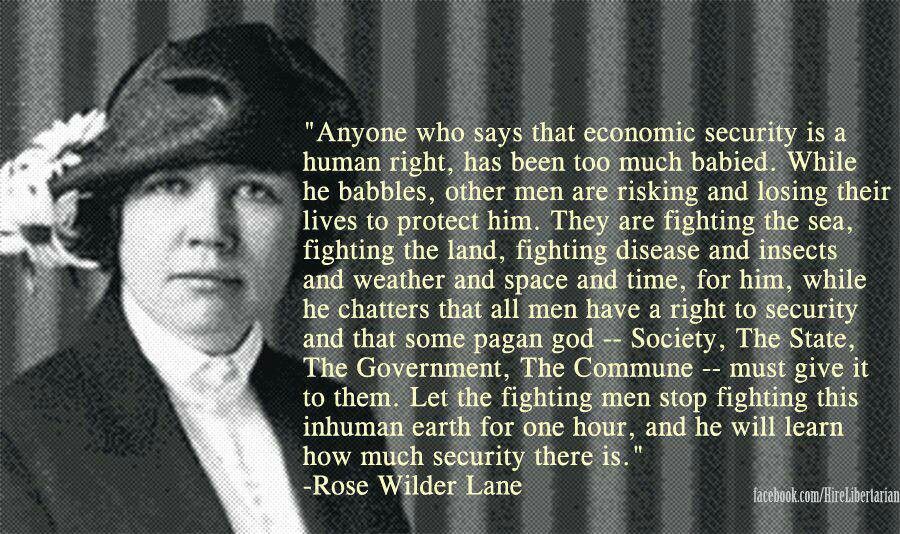 Rose Wilder Lane’s “Give Me Liberty”, which traces her evolution from communism to a devotion to liberty, is as relevant to the present as it was in 1936.

By Gary Galles on Mises.org

March is Women’s History Month. Among the women who have been remembered and honored, however, one who has clearly not received enough attention is Rose Wilder Lane (daughter of Laura Ingalls Wilder). Among the past century’s most ardent proponents of liberty, she developed the inseparable connection between life and liberty and the importance of individuals understanding the implications of their freedom. In her honor, especially given the current lack of serious attention to protecting our liberties in current American politics, revisiting Give Me Liberty (1936), which traces her evolution from communism to a devotion to liberty, seems particularly appropriate. And it has surprisingly clear implications for the 2020 election.

From this point of view…the Profit System causes the injustice, the inequality, we see. We must eliminate profit; that is to say, we must eliminate the Capitalist. We will take his current profits, distribute his accumulated wealth, and ourselves administer his former affairs….When the Capitalist is gone, who will manage production? The State….It was at this point that the first doubt pierced my Communist faith….

This economic revolution concentrated economic power in the hands of the State…so that the lives, the livelihoods, of common men were once more subject to dictators…Every advance toward personal liberty which had been gained…was lost by the collectivist economic reaction….

Representative government cannot express the will of the mass of the people….In actual fact, the population of a country is a multitude of diverse human beings with an infinite variety of purposes and desires and fluctuating wills…Any government of multitudes of men, anywhere, at any time, must be a man, or few men, in power….

Centralized economic control over multitudes of human beings…must become such minute and rigorous control of details of individual life as no people will accept without compulsion….

What I saw was not an extension of human freedom, but the establishment of tyranny on a new, widely extended and deeper base….

The Soviet government exists to do good to its people, whether they like it or not…To that end they have suppressed personal freedom; freedom of movement, of choice of work, freedom of self-expression in ways of life, freedom of speech, freedom of conscience….

Producing food from the earth and the sea, making goods from assembled raw materials, and their storing, exchanging, transporting, distributing and consuming by vast multitudes of human beings are activities so intricately inter-related and inter-dependent that efficient control of any part of them demands control of the whole….

The Communist hope of economic equality…rests…on the death of all men and women who are individuals….

I came out of the Soviet Union no longer a communist, because I believed in personal freedom….I [saw] an essentially medieval, planned and controlled economic order was taking over the fruits of the industrial revolution while destroying its root, the freedom of the individual….

I understood at last that every human being is free; that I am endowed by the Creator with inalienable liberty as I am endowed with life; that my freedom is inseparable from my life, since freedom is the individual’s self-controlling nature….

I hold the truth to be self-evident, that all men are endowed by the Creator with inalienable liberty, with individual self-control and responsibility….The extent to which this natural liberty can be exercised depends upon the amount of external coercion imposed upon the individual….Whoever makes decisions is responsible….

The men who met in Philadelphia to form a government believed that all men are born free. They founded this government on the principle: All power to the individual….The intent was actually to give the governing power to each common man equally….Common men were to govern themselves…by destroying power itself, so far as this could possibly be done. Power was diminished to an irreducible minimum….Never before had the multitudes of men been set free to do as they pleased….

[I]ndividualism. In less than a century, it created our America….

American wealth is innumerable streams of power…flowing through the mechanisms that produce the vast quantities of goods consumed by the multitudes, and the men who are called the owners can hardly be said even to control the wealth that stands recorded as theirs, for its very existence depends upon satisfying chaotic wants and pleasing unpredictable tastes….in this American chaos business and industry were compelled to serve those desires or perish….

There is no system here….But if this chaos were replaced by a system…functioning for the sole purpose of serving the public good, these men must be replaced by a bureaucracy… controlling in detail, and according to a plan devised by men possessing centralized economic power, all the processes….

[America’s] brief experiment in individualism has not only created great wealth and an unimaginable multiplication of forms of wealth in goods and services, but it has also distributed these forms of wealth to an unprecedented and elsewhere unequalled degree.

As I was reading Lane’s words, I started to get a strong sense of how “this is as much about 2020 as it is about when she wrote.” But I was then floored by just how true that sense was.

I read…that less than 10 per cent of our population own more than 90 per cent of the wealth. This alarmed me in 1893…But it seems to me even more alarming that many American minds accept this statement as true upon no better proof than that they have read it, and from it conclude, first, that “something must be done,” and, second, that the proper thing to do is to take ownership away from individuals and have property administered by The State; which means, by autocratic rulers giving orders through an enormous bureaucracy….

There is nothing new in planned and controlled economy. Human beings have lived under various forms…for six thousand years. The new thing is…individualism…[the principle that created this country and has, in fact, brought the greatest good to the greatest number]….

Can individualism…stand against the determined attack of [those] organized, controlled, and fanatically sure that a strong man in power can give a people better lives than they can create for themselves?…

Will [we] defend the Constitutional law that divides, restricts, limits and weakens political-police power, and thus protects every citizen’s personal freedom, his human rights, his exercise of those rights in a free, productive, capitalist economy and a free society? Or will he permit…suppressing individual liberty, sacrificing human rights to an imagined “common good,” and substituting for civil laws the edicts, or “directives,” once accurately called tyranny and now called administrative law? This is the choice that every American must make….the present situation puts it before us and requires a decision….

[N]othing whatever but the constitutional law, the political structure, of these United States protects any American from arbitrary seizure of his property and his person….

In 1933 a group of sincere and ardent collectivists seized control of the Democratic Party, used it as a means of grasping Federal power, and…began to make America over. The Democratic Party is now a political mechanism having a genuine political principle: national socialism….

[R]eactionary pseudo-thinkers shifted American thought into reverse….They called it “liberal” to suppress liberty; “progressive” to stop the free initiative that is the source of all human progress; “economic freedom,” to obstruct all freedom, and “economic equality” to make men slaves….We never heard that these United States are a political structure unique in all history, built upon…the fact that individual persons are naturally free, self-controlling and responsible….

These United States stand for a political principle that must conquer and change the whole world, because it is true….Americans have been creating a new world, the modern world…[but] We wanted the ancient thing that was marked “New.”…

Today, Federal administrative agencies have nearly destroyed those divisions of the political power which alone protect the property, liberty and lives of American citizens…because a state that dictates men’s action in producing and distributing goods must have undivided and absolute power.

[L]eading statesmen assume that…suppression of liberty is good for mankind, and that these new forms of an old tyranny are here to stay….

Free thought, free speech, free action, and freehold property are the source of the modern world. It cannot exist without them. Its existence depends upon abolishing these reactionary state controls and destroying the socialist State.

The task before Americans is to end these police-controls of peaceful, productive American citizens, to repeal all the reactionary legislation and…Executive orders…to abolish the Federal corporations, departments, bureaus and agencies that dictate and enforce these State controls…to require men in public office to recognize again every American’s natural right as a free person….

No politician, yet, has asked American voters to give him the power to strip any State of the powers it has usurped from its citizens, nor to strip the Federal Government of the powers it has usurped from the States; to restore the rights of the citizens, the rights and powers of the States…nor to add…further restrictions that will adequately protect the property, liberty and lives of persons… and make the United States again the world-champion of human rights and the leader of the world-liberating revolution….

Lane’s experience with the reality of Russian socialism, expressed insightfully, has brought many to see the paramount importance of freedom (or more often, the tragedy of its absence) in human lives. What we can learn from Give Me Liberty is also reinforced in her 1943 The Discovery of Freedom. She offers us lessons which need relearning in each generation if liberty is to be defended from the ongoing erosion it faces. And it is very hard to miss just how appropriate her words still are for the political situation Americans face most of a century later. That is why it is useful to remember what she wrote in her autobiographical sketch,

I am now a fundamentalist American; give me time and I will tell you why individualism, laissez-faire and the slightly restrained anarchy of capitalism offer the best opportunities for the development of the human spirit. Also I will tell you why the relative freedom of human spirit is better—and more productive, even in material ways—than…any other rigidity organized for material ends.