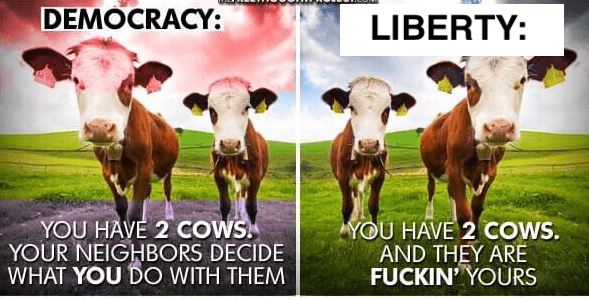 Amitabh Kant is right, but for the wrong reasons. Democracy and liberty, after all, are uneasy bedfellows.

The public seems to have taken outrage to Amitabh Kant, the CEO of the NITI Aayog, and one of central government’s top bureaucrats, saying yesterday (December 8, 2020): “Tough reforms are very difficult in the Indian context, we are too much of a democracy.”

While one can understand that the current dispensation is not exactly known for its ‘democratic’ credentials, the reactions asking for more democracy, are equally misguided. But before we go there, please read Vivek Kaul’s article on why the ‘China’ argument is totally wrong too.

In the long run, democracy is, unfortunately, incompatible with individual liberty.

In a political democracy, a majority can also force its preferences on others in any issue. That is why our constitution contains Fundamental Rights, which no majority can undermine. However, those constraints on democracy have largely been undermined, with the acceptance by the Supreme Court of democratic socialism in the form of various bans and subsidies.

A system of exclusively voluntary cooperation based on self-ownership requires that property rights be respected; no majority can violate owners’ rights. Individuals’ spending choices votes change outcomes, even when their preferences are not the majority’s preferences.

Democracy, on the other hand, does not allow politicians to think beyond the next five years. Promises are made to take from the ‘rich’ and give to the ‘poor’, with the result that society on the whole becomes poorer.

As it has been famously said, ‘an election is nothing more than the advanced auction of stolen goods’.

In the long run, every democracy turns into an ‘ineptocracy’. That is, ‘a system of government where the least capable to lead are elected by the least capable of producing, and where the members of society least likely to sustain themselves or succeed, are rewarded with goods and services paid for by the confiscated wealth of a diminishing number of producers’.

This is meant to be a provocative article, so we leave you with further reading below to dive into the subject in greater detail :