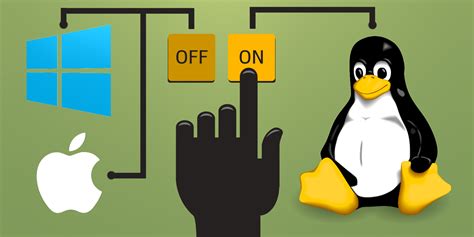 By Bertel King on Makeuseof.com

You often hear Linux described as an alternative operating system that you can use instead of Microsoft Windows, Apple macOS, or Google Chrome OS. But once you search for Linux online, you find that the situation is much more complicated than that. There simply isn’t a thing called “Linux” for you to download and put on your computer.

Linux isn’t a product. It’s an entire ecosystem of freely shared software distributed in many different ways. This software now powers most of the world’s servers, supercomputers, and phones. It is also increasingly a great option for your PC.

Linux is technically not a desktop operating system, but a kernel. The kernel is the part of your computer that enables physical hardware to communicate with what’s on-screen. The kernel is the reason text appears when you type, the cursor moves when you stroke the touchpad, and images appear on your monitor.

In the early days of computing, programmers freely shared code and programs. This started to change when corporate entities like IBM, Apple, and Microsoft started to release copyrighted code that users couldn’t view and came with restrictions on use. In response, the GNU Project was formed as an effort to create a fully functional computer powered by software that was still freely shared and distributed.

In addition to a full suite of programs, the GNU Project produced the GNU General Public License (GPL), a copyleft license that ensured code remained freely shared and accessible.

Before the GNU Project produced a functioning kernel, the Linux kernel appeared and filled that role. Since it was licensed under the GPL, a different kernel was no longer needed. People adopted the Linux kernel, and that became the name that stuck.

To this day, the code the GNU Project produced provides much of the foundation for software used in conjunction with the Linux kernel, which is why you often see Linux referred to as GNU/Linux. But the name ultimately isn’t as important as the culture built around free and open-source software.

What Is Free and Open-Source Software?

Free and open-source software, or FOSS, is software whose code is publicly available for anyone to view, modify, copy, and redistribute. Such software comes with a free software license, such as the GPL, that grants these rights.

Note that in this case “free” does not refer to cost. Free software can cost money, but it often doesn’t, because anyone has the freedom to make and redistribute a copy that people can download for free.

Many free and open-source apps are available for Windows and macOS, such as Firefox, LibreOffice, GIMP, Krita, Blender, and VLC. Many FOSS apps begin on Linux before being ported to other platforms. A big part of what distinguishes Linux is that not only are most apps free and open-source but so are the system components working in the background.

Much of this software comes from volunteers, but some companies do pay employees to maintain or contribute to the free software they depend on. Some code comes from students, while other code comes from people who have decided to take an existing proprietary app and re-release it under a free license.

These people all work together, contributing to one another’s apps, reporting bugs, and using some projects as the foundation for new ones. Collectively these people, along with graphic designers, people who package and distribute software, and users, are known as the free software community.

Not everything built with Linux centers around free and open-source software. Google’s Chrome OS is, ultimately, a Linux-based operating system. Underneath everything you see is a project known as Gentoo, which Google uses as a foundation to build its own interface on top of.

Android also uses the Linux kernel and is therefore technically a version of Linux, even though you don’t have access to most of the software available for Linux.

Linux is an operating system built around a set of values. If you agree with those values, that alone can be ample reason to give Linux a go. But there are many pragmatic reasons to switch to Linux.

Linux is freely available for anyone to download and use for any purpose, and so are most of the apps on it.

Unlike proprietary software, this is software that you actually get to take ownership over, giving you genuine control over your computer. Use it to do what you wish. Take it apart and tinker. Put it back together. Learn from it. Keep your machine running as long as possible.

If none of this interests you, simply use your computer to get stuff done. If you come to depend on a particular program, you can count on the source code to stick around and your ability to continue running it.

You can establish a workflow no company is going to pull out from under you because of an acquisition or change in business model (these things still happen in the open-source world, but someone new usually steps in to maintain the existing source code, rather than watch it disappear).

You can turn your Linux knowledge into a career, or you can use Linux as a stable foundation for the career of your choice.

No one company or organization controls Linux, so there isn’t any “one” version of Linux for everyone to rally around. Instead, many different groups have bundled together with the Linux kernel, GNU tools, and other freely shared software into separate functional operating systems commonly known as “distributions” or “distros.”

For the most part, each distro is a different way of putting together and distributing the same software that everyone else has equal access to.

Some distributions scratch a specific itch, such as producing multimedia or playing games. Others are simply general-purpose operating systems that you can use to do whatever task you wish, like Windows and macOS.

To download Linux, you don’t go to linux.com. Instead, you pick a distro to download. Here are a few prominent options, with a generalized description:

These are but a few of the many hundreds, if not thousands, or Linux distros floating around across the web. There’s no one best way to start using Linux for the first time, and this choice can leave some people feeling paralyzed. Ultimately, pick one, and if you like it, stick with it. If not, try a different one.

Why Is Linux Important?

Linux has become the operating system secretly powering many of the machines we interact with on a daily basis. Linux runs ATM machines, gas pumps, and in-flight entertainment. It manages websites, cash registers, and the drones we send to Mars.

Linux is one of the largest free software projects in the world. It shows how much people can do by working together. Developers today choose to use open source projects as a foundation rather than build everything from scratch. And when people contribute back, the software becomes better for everyone. Will you become the next member of the community?