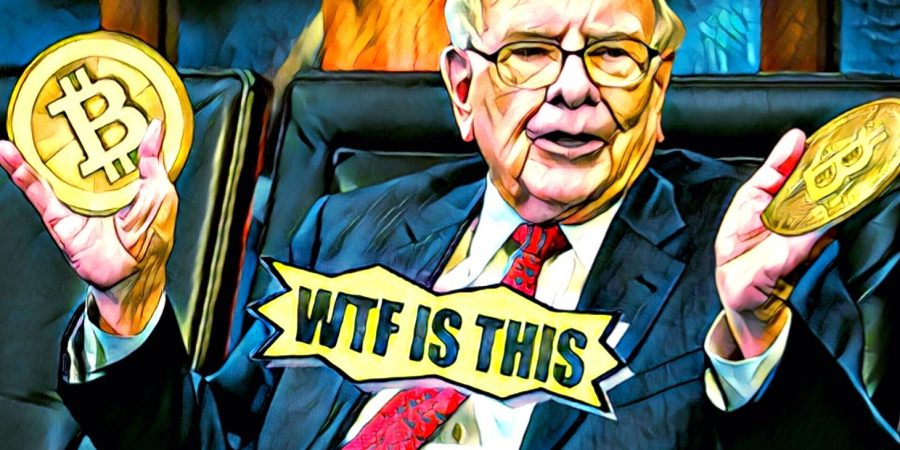 Warren Buffett’s most recent critique about Bitcoin is its lack of “producing” anything, which actually proves its monetary properties and usefulness as money.

By Joakim Book on Bitcoin Magazine

Before I exited academia, I trained as a financial historian. I looked at balance sheets in dusty, old archives and I investigated what banks were doing in Victorian Britain; I ran fancy statistical analyses on 19th-century stock prices to see if they behaved like modern portfolio analysis suggests stock prices should; and I looked at how money operated and how monetary regimes changed over time.

In all my reading, nothing annoyed me more than established economists with equation-filled whiteboards and paper models arrogantly declaring that some feature of money and banking was defective. With zero knowledge of the past, academics often stood up from their endowed university chairs and proclaimed that money could not be private, financial markets would disintegrate without regulators, and banks could not operate without governments backstopping them.

Strange, I thought, looking at the historical documents in front of me. They clearly used to …?

When you say things that are directly contradicted by reality, historical or present, you should probably just stop doing that. But when you’re 91 years old, the fifth(-ish) richest person on the planet and carry a reputation as the greatest investor of all times, different rules apply. With cameras pointed at you and hungry newspaper fanboys praising your every word, you can get away with nonsense that otherwise wouldn’t fly.

“If the people in this room owned all the farmland in the United States and you offered me a 1% interest in it […] and said ‘pay us a bargain price of $25 billion dollars,’ I’ll write you a check this afternoon.

“Now, if you told me that you owned all of the bitcoin in the world and you offered it to me for $25, I wouldn’t take it, because what would I do with it? I have to sell it back to you one way or another! Maybe they’re the same people [who sold it to him], but it isn’t going to do anything.”

This particular accusation is old and Buffett himself has repeatedly levied it against gold: the yellow metal can’t be valuable and must be a poor investment since it doesn’t produce any yield, return or interest — “It doesn’t do anything but sit there and look at you.” For bitcoin, being an improved version of gold, we can understand that this busy nonagenarian simply recycled his gold rant. Buffett continues:

Bitcoin is all a scam, a circus, according to Buffett: “There’s no more money in the room, it’s just changed hands — with a lot of maybe fraud and costs involved […] Basically: assets, to be of value, they have to deliver something to somebody.”

What Holds For Bitcoin, Holds For Other Monies Too

It is amusing how opponents of bitcoin levy arguments against it that apply equally well to all other monies: You’re not persuasively attacking or denouncing bitcoin by stating that it has features of other well-functioning money; or refer to practices in bitcoin that regularly occur also in the currency at the top rung of the monetary ladder.

It is too expensive to transact with bitcoin!

Yes, for the times when block space has been congested and network fees high — but even then, properly considering bitcoin as a first-layer settlement media rather than a censorable third-layer fiat digital entry, it’s probably cheaper than the legacy system (Bitcoin is comparable to Fedwire, not Visa). With financial hedging and price-level uncertainty, the resource-cost debate of fiat versus hard money has clearly come out against the fiat dollar.

Bitcoin is used by criminals and money-launderers!

Yes, to a surprisingly small extent — but more importantly: so is the dollar. The features that make a money good for us well-behaved and law-abiding citizens also make it a good money for criminals. Criminals want anonymity, transaction privacy and reliable settlement just like the rest of us — and they want to tap into the most accessible and liquid monetary network that provides those things. All monies are for enemies.

Bitcoin wallets can be hacked and funds lost!

Yes, and so can bank accounts and credit cards in the fiat world — or plain old cash if you physically lose it, or if you’re mugged on the street, or suffer the flash kidnappings that Brazil’s new fiat fast-payment system enabled. Not to mention the perfectly legal extortions that fiat banks routinely engage in: insanely slow payment mechanisms, blocked transactions, overdraft charges and below-inflation interest rates.

“The gold and silver money which circulates in any country, and by means of which the produce of its land and labor is annually circulated and distributed to the proper consumers, is, in the same manner as the ready money of the dealer, all dead stock. It is a very valuable part of the capital of the country, which produces nothing to the country.” – Adam Smith, (1776)

Buffett’s main concern with bitcoin (and gold) is that owning some doesn’t “produce” anything. To be of value, assets have to “deliver something to somebody” in his view.

If we had a look at Buffett’s fiat wallet, would we not find cotton-and-linen bills with U.S. presidents on them? If we peeked into his bank account, would there not be fiat digital entries sitting there, not “producing” anything? Bitcoin is a way of holding money that isn’t an investment — it’s a refusal to finance commercial banks’ assets or the Federal Reserve’s seigniorage-yielding assets, both of which emerge when individuals hold their notes or deposit funds with them. Even while doing nothing, producing nothing, the institution of money is crucial to any society more complex than a self-sufficient household. Wrote Ludwig von Mises in 1913:

“Money, in fact, is indispensable in our economic order. But as an economic good it is not a physical component of the social distributive apparatus in the way that account books, prisons or firearms are. No part of the total result of production is dependent on the collaboration of money, even though the use of money may be one of the fundamental principles on which the economic order is based.”

Long ago, monetary economists established that money, a non-interest-bearing asset, provides its value to individuals through acting as a hedge against the uncertainty of the future — the transaction possibilities that may emerge down the line but that we can’t predict or appraise right now. We give up the potential return we could have earned had we invested that money in some venture that “produced” something — grain, dividends, interest — in exchange for the convenience of having ready cash for transactions not yet made.

Buffet’s company, Berkshire Hathaway, holds north of $100 billion in bank deposits and short-term Treasurys, explicitly to protect the company against unexpected expenditures and allow it to take advantage of future investments. Dissonance, anyone?

From John Maynard Keynes to Mises to Carl Menger and further back through the history of erudite economists, money is crucial to the facilitation of trade while not producing anything on its own. Its purpose isn’t to produce “something to somebody.” Instead, money has the strange property that it is acquired not to be consumed or used, but to be given away in future transactions.

If we were a little snarky with Mr. Buffett, then, we could ridicule his claim that he has to sell bitcoin “back to you one way or another” by once more pointing to the dollar bills in his pocket or the cash balances his company holds. Those don’t “do” anything either; to procure anything real with them, they must be sold back to others — others from whom, collectively speaking, he once acquired them.

… And What About Those Apartments?

If the above ironies and own goals weren’t enough, there is something strange going on with the examples that Buffett picked in illustrating his argument. Farm and farmland is hard to argue with, as plants literally grow more plants — though not automatically, and not without considering assistance from farmers, machines and fertilizers.

Apartment buildings and real estate, however, are a different story. Manhattan condos don’t spin off little apartment babies that grow into valuable real estate in the fertile soil of a housing boom. Certainly, owning some would let you rent them out to other people who in turn benefit from what the statisticians at Bureau of Labor statistics would call “shelter services” — or, in case you own the house in which you reside, using some creative accounting in the consumer price index calculations they result in “owners’ equivalent rent.”

At the end of a given number of real estate transactions there are, per Buffett, “No more [apartments] in the room, it’s just changed hands.” Does that mean apartments have no use and no value?

But here’s the awkward point for Mr. Buffett: Bitcoin, just like other monies, can only provide a profit for its owner if it’s rented or sold to somebody else at a future (higher) price. Apartments, owned outright, can only recoup their cost of investment by selling them to another buyer at a higher future price. In Buffett’s example, he rents them out (possibly to the same nondescript collective of people from which he hypothetically purchased them), a service that must be sold at high enough a rent to cover costs and repairs — an income stream, economically speaking, equivalent to a high enough sale price, spread out over time.

To be valuable in a free market, any good, service or asset must “deliver value to somebody.” The fact that we might not be able to tell what that value is does not automatically undermine it as an asset in some objective sense. For its viability, bitcoin does not require Mr. Buffett’s understanding.

In whichever version they emerge (academics, central bankers or as one of the richest men alive), angry, old men incessantly yelling at clouds, are rarely persuasive. Saying things that are instantly undermined by reality, or history, makes for poor presentation.

In this case, however, Warren Buffett was surprisingly correct about bitcoin and its monetary properties.

The fact that an item’s only feasible use is to be sold back to the community at a later stage is almost definitionally what money is — an item you acquire not to use, produce or consume, but to give away later. Money, unlike farmland or dividend-paying stocks, doesn’t equate to earnings for its owner.

Instead, it allows us to navigate transactions in an uncertain future. Like the quotes from Mises and Smith illustrate, we’ve long known how the seemingly wasteful use of costly money improves the overall economy’s operation.

Perhaps Mr. Buffett didn’t realize it, but he just denounced bitcoin by accusing it of having monetary properties. Hurray!