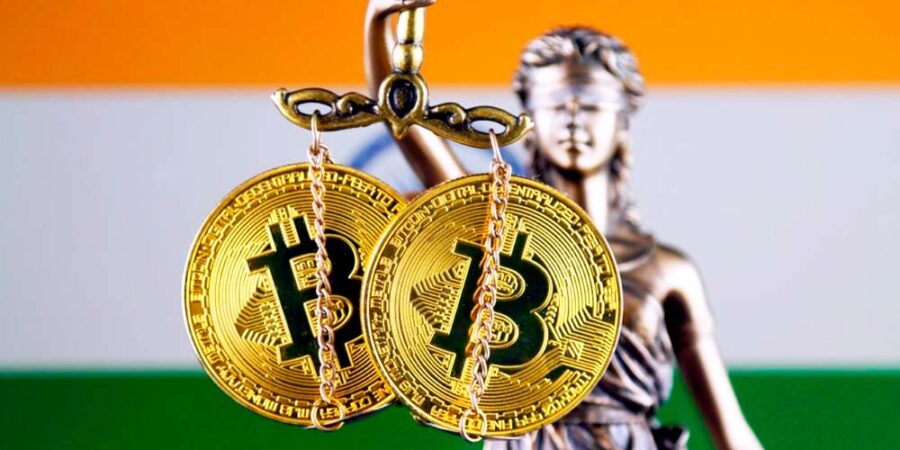 By Santosh S on the Indian Corporate Law Blog

Since their advent in global economic affairs, cryptocurrencies have consistently stirred controversy, fear and caution. Despite this, they have proliferated rapidly, causing some significant legal and policy considerations to arise. In tandem with this global trend, cryptocurrency trading saw an increased share in volume in India over the past decade. In December 2020, the average daily traded volume across the top four Indian cryptocurrency exchanges stood at over $22.4 million. Since March 2020, there has been a 500% growth across all top exchanges operating in India.

Undeterred by this, the Indian regulatory framework continued to not expressly concern itself with the regulation of cryptocurrencies in any statutory enactment or regulation until the recent rumor-mill surrounding the current Union Budget seeking to ban cryptocurrencies in their entirety and establish an “official digital currency”.

In the past, the only concrete attempt to regulate cryptocurrencies was made by the Reserve Bank of India (“RBI”). Over the past few years, the RBI has issued press releases warning crypto-traders of the risk and volatility that cryptocurrencies pose. Eventually, these warnings materialized in a circular dated April 6, 2018, in which the central bank, firstly, directed all entities within its regulatory purview to stop dealing in cryptocurrencies and/or to exit any relationship which required providing services or facilitating any person or entity in dealing with or settling cryptocurrencies, and secondly, rendered it illegal thereafter to initiate any such dealings or services in cryptocurrencies.

This post seeks to highlight the recent developments in the regulatory framework concerning cryptocurrencies, the constitutional validity of a ban on the trade of cryptocurrencies and the approach adopted by other jurisdictions in this regard.

Constitutional Challenge to the RBI Circular

Inevitably so, the vires of the circular was challenged through various petitions before the Supreme Court in Internet and Mobile Association of India (IMAI) v. Reserve Bank of India on the grounds that the impugned circular violated the Fundamental Right to Trade vested in Article 19(1)(g) of the Indian Constitution. At this juncture, it is pertinent to note that for any law seeking to restrict Article 19(1)(g), it must be proved, inter alia, that the restriction sought is reasonable andthere is no availability of lesser alternatives.

The Court, agreeing with the IMAI (petitioners) on the former count, held that the impugned circular was unreasonable/disproportionate and that the RBI failed to consider the availability of lesser alternatives. On the latter, i.e., the vires of the circular, the Court held that a combined reading of various provisions of the Reserve Bank of India Act, 1934, the Banking Regulation Act, 1949 and the Payments and Settlements Systems Act, 2007 gave the scope of authority to RBI to regulate cryptocurrencies and its associated enterprises.

Reflecting on the IMC’s Draft Bill

Prior to the Supreme Court’s judgment in IMAI, the government, upon recommendations from the RBI, constituted an Inter-ministerial Committee (“IMC”) to develop an approach towards regulating cryptocurrencies. Through its report, the IMC proposed a Draft Bill titled “Banning of Cryptocurrency & Regulation of Official Digital Currency Bill, 2019.” Subsequent to the RBI circular being struck down, this is the only proposed law in place that seeks to regulate cryptocurrencies and is indicative of any bill being tabled in the future. The provisions of this bill seek to ban any and all operations of private cryptocurrencies in toto. section 3 of the Draft Bill expressly mentions that “No person shall mine, generate, hold, sell, deal in, issue, transfer, dispose of or use Cryptocurrency in the territory of India.”

This becomes important since the RBI and the government (through the Ministry of Finance) have repeatedly suggested that cryptocurrencies do not adequately satisfy the features of money and, therefore, cannot constitute legal tender.

In sharp contrast, the Supreme Court in IMAI, after acknowledging several legal developments, suggested that “if an intangible property can act under certain circumstances as money (even without faking a currency) then RBI can take note of it and deal with it”. While this was with specific reference to the regulatory powers of the RBI to govern cryptocurrencies, it is an observation that becomes pertinent with questions pertaining to the test of constitutionality.

Surviving the Test of Reasonableness and Proportionality

If the rumour-mill is to be given any heed and a complete ban on cryptocurrencies is imminent, it would be useful to pre-emptively gauge such a ban’s constitutional validity. Firstly, the precedent in IMAI made it abundantly clear that denying companies operating as cryptocurrency exchanges the access to banking services would fall squarely against the right vested in Article 19(1)(g). While doing so, the Court made it categorically clear that the impugned circular did not concern itself with an outright ban in cryptocurrencies’ trade. Therefore, the circular did not per se cause a direct detriment to traders of cryptocurrencies but only impacted the fundamental right to trade of cryptocurrency exchanges, which acted as platforms for such trade and found it necessary to avail banking services thereof. Traders could continue engaging in cryptocurrencies without the presence of these exchanges.

Therefore, while the precedent in IMAI recognizes the fundamental right of a cryptocurrencyexchange to avail banking services during the course of its business, it does not recognize the fundamental right to trade in cryptocurrencies. Notwithstanding this, it is the author’s opinion that a complete ban on such trade would nonetheless not stand the test of constitutionality.

Firstly, reference may be made to the judgment in Md. Faruk v. State of Madhya Pradesh, where it was held that a law which prima facie vitiates the right guaranteed under Article 19(1)(g) might be upheld only if it is established that it seeks to impose reasonable restrictions in the interest of the general public and a less drastic restriction will not ensure the same.

In addition to this, in IMAI, the Court recognized various statutory enactments, including but not limited to provisions of the Payments and Settlements Systems Act, 2007, by way of which the RBI could regulate cryptocurrencies. Therefore, a regulatory sandbox to test the viability of cryptocurrencies and its functioning within the existing statutory framework could usher the supposed goal of harnessing a digital economy. This is an alternative that continues to exist but has not been considered.

Secondly, the Supreme Court in Bennett Coleman v. Union of India held that the impact and not the object of the measure will determine whether or not a fundamental right would stand violated. Given the continued existence of alternatives to safeguard the interests of the general public, a total ban would completely obliterate the current market for cryptocurrencies in India, which happens to be an important contributor to the global trade in cryptocurrencies. Furthermore, the test of proportionality, as elaborated by the Supreme Court in Modern Dental College v. State of Madhya Pradesh, lays down a four-pronged test to look into the question of proportionality. These are:

If a complete ban is instituted primarily on the possibility of terror financing and money laundering by virtue of trading cryptocurrencies, it would not satisfy any of the above grounds to test proportionality. As was held in Modern Dental College, a mere ritualistic incantation of money laundering and black money as a justification for total prohibition will not satisfy the test of proportionality.

In fact, the Record of Discussions of the IMC indicates that initially it was of the view that banning would not be a feasible option since this could encourage some operators underground to use cryptocurrencies for illegitimate purposes (at paragraph 2.33 of the IMAI judgement).  There is no reason to believe why this concern is ill-founded. A ban on cryptocurrencies could further the possibility of money laundering since it will continue to exist in an unregulated sphere.

Lastly, if the IMC’s draft bill is to be converted into law, then not only would trading be banned, but mining cryptocurrencies would also be banned. Even China, which is considered to have one of the most stringent approaches to cryptocurrencies, is yet to ban mining and allied activities. India would therefore be the first prominent economy to wipe out any form of engagement with cryptocurrencies completely. Given the above constitutional concerns, a complete ban of this form would be a manifestly disproportionate measure.

Developments in other Jurisdictions

Recent developments across the globe in the treatment of crypto-currencies is indicative of a forward-looking approach. Cryptocurrencies, albeit causing several pertinent concerns to be raised, have significant benefits such as peer-to-peer focus and user autonomy and have found a way around traditional monetary exchange systems’ pitfalls. Recently, Zimbabwe, an economy that has consistently highlighted the issues pertaining to traditional monetary systems, is considering the development of regulatory sandboxes aimed to ascertain whether individual domestic crypto companies can be allowed to operate independently or through micro-financing mechanisms.

Additionally, courts in France have recognized cryptocurrencies as a fungible asset that can be interchanged and be lent as a commercial loan. Germany’s Central Bank BaFin has legalized and positioned cryptocurrencies and crypto-service providers within the contours of its regulatory framework. Even the Financial Action Task Force (“FATF”) has issued guidance regarding regulating transactions in cryptocurrencies and has long foregone its stance of a complete ban on trade due to money laundering and terrorist financing concerns.

In light of this, it becomes essential that the approach towards cryptocurrencies is not based on a knee-jerk reaction to the threats that it can pose. While a complete ban appears to be a tempting option, it may not prove to be the best response, least of all the constitutionally valid one. As it stands in the status quo, there is an urgent need to provide clarity on the status of cryptocurrencies. The evolving nature of the global economy, the increasing inclination towards accepting cryptocurrencies and the significant benefits that it entails are all factors to be considered before crossing the Rubicon.