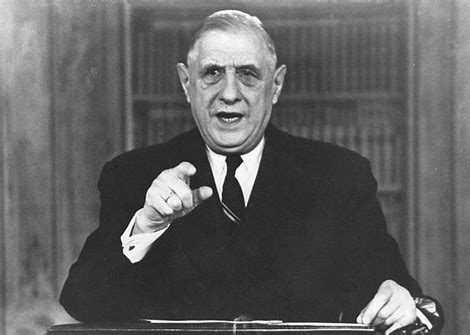 Excerpt from ‘Never a Dull Moment’, a compilation of Murray Rothbard’s writings

When the Establishment Press really zeroes in on someone and smites him from pillar to post, day after day, then it is a safe bet that he can’t be all bad. It is also a wise move to dig further and find out the reason for all this uniform wrath. So in the case of Charles de Gaulle, whom the press, liberal and conservative, has been denouncing and vilifying for years.

Why? Well for one thing, conservatives feel that they have been betrayed. The right wing is perpetually on the hunt for a Strong Man, a Man on a White Horse, who will come and, by stern dictatorial measure, bring us forth to our true rightist mission of National Glory and World Crusade. The right was therefore delighted when a coup brought down the Fourth Republic in France and elevated General de Gaulle to a quasi-dictatorial post over the French nation. Here was a man with seemingly all the qualifications to be beloved of the right wing: a general; a grandiloquent national patriot filled with the rhetoric and the mystique of French national grandeur; a man who tied in his own personal sense of glory with France itself. Who better?

It was at that point when the right received its shock. For “le grand Charlie,” instead of instituting rightist measures, proceeded on a very intelligent and sensible course. De Gaulle had learned the lesson of the crippling defeat of the French empire in Indo-China. He had learned that, in spite of his own personal preference for Glory and Empire, France in this day and age could not afford the cost, financial and political, of trying to hold onto rule in places where the native population had risen up to win its independence. And so de Gaulle decided to adjust to the new world, to pull completely out of the French empire in Algeria, and to make genuine peace with the lands formerly in colonial subjection. The wrath of the right, both in France and the U.S., at de Gaulle has never abated since.

He dared to pull out where France was not wanted and to grant the natives their independence! And ever since, as at Quebec, de Gaulle has become a firm partisan of the struggles for independence by all of the Third World, including his courageous support of the Arab cause in the Middle East.

In Europe, too, de Gaulle decided that it was far better for all to abandon the American-induced posture of hostility and division between the East and West power blocs. Clearly, it would be better for all of Europe, East and West, to live in peace and harmony, and to opt out of the damaging and potentially catastrophic cold war struggle. Hence, de Gaulle’s persisting attempts to achieve friendship and peaceful co-existence with Soviet Russia and Eastern Europe.

In contrast, de Gaulle, angry at American imperialism’s attempts to push France and every other western nation around, declared for genuine political independence from the U.S. Hence the anger of the Liberal Establishment toward France.

And last but not least, de Gaulle’s admirable political independence has been matched by a healthy economic independence, best expressed by his firm refusal, in the face of maximum political pressure by the United State, to go along with Anglo-American policies of easy money and inflation. Guided by the libertarian economist and monetary expert Jacques Rueff, de Gaulle has fought the good fight, almost alone, for hard money and for a return to a genuine gold standard at a realistically valued rate (e.g., $70 or so per ounce instead of the current absurd rate of $35).

De Gaulle has, virtually single-handedly, stood between all of us and an eventually disastrous worldwide inflation propelled by Britain and the United States. These are some of the reasons by the Establishment, both right and left, hates de Gaulle, and why the rest of us should not.