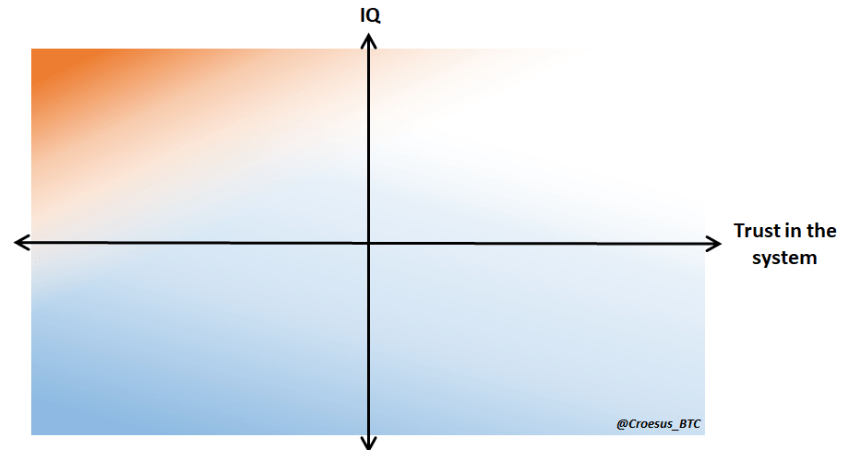 Exasperated with our conversation, I asked bluntly, “what do you think the probability is that Bitcoin hits $1M per coin?”  Without hesitation, my friend replied: “0.001%.”  I laughed and said I put it at 80%.  I asked if, after thousands of hours of research on my part, maybe there was some information asymmetry?  He quipped, “or maybe self-motivated beliefs.”

That’s Dan.  He’s one of my good friends from business school.  He got a 780 on his GMAT and is almost always the smartest man in the room.  We both worked at one of the elite management consulting firms before attending one of the elite MBA programs, followed by returning to elite job opportunities in the most desirable cities in America.  My B-school friend group is full of Dans – the kids who ran the gauntlet of achievement-obsessed America and cleared the highest bar every time it rose higher.  The consummate yuppie elite.

Yet they are all resistant to Bitcoin.  It has become a topic of frustrated fascination for me.  My other friend groups have largely heeded my vociferous and fervent testimony that Bitcoin is the most important asset of the 21st century.  Yet my elite MBA friends cling to dismissiveness that borders on outright hostility.  Why?

This is a complex topic, with a few layers I will try to address here.  As a starting point, let’s introduce the closest attempt at an explanation that I’ve seen to-date:

Clever and compelling, this model explains what many in Bitcoin perceive: some of the smartest people in the world think Bitcoin is going to boom, but so do some dumbasses.  Importantly, this model also explains the mockery and resistance we see from our reasonably intelligent friends and family.  But it’s too easy of an explanation – I cannot claim to be smarter than Dan or the hundreds of other brilliant MBAs in my graduating class, not one of whom has reached Bitcoin maximalism, as far as I know.  Clearly, there is something else going on here.

First, let’s separate the $250k believers in Murad’s meme into what they really are: Bitcoin moon bois on the left, and deeply researched Bitcoin maximalists on the right.  In truth, they are two different groups.  The first group believes that Bitcoin is going to the moon largely because they believe that past performance is indicative of future results – we’ll say that this group subscribes to “Bitcoin moonism”.  The second group has come to understand the game theoretic inevitability of Bitcoin’s continued rise in the context of central bank money printing, the deterministic price mechanics of quadrennial supply shocks via Bitcoin’s halvings and the market psychology that programmatic price appreciation precipitates, and the winner-takes-all implications of an absolutely scarce store of value asset – what we call “Bitcoin maximalism”.

The IQ framework seems to hold up decently with regard to the moon bois, but it doesn’t account for the Dans and all of the other brilliant yuppies that I know.  When I thought about what is the defining difference between the Bitcoin maximalists and my yuppie elite friends, the surface level distinctions that popped out were political (e.g., libertarianism, Trump support, second-amendment rights, Black Lives Matter).  But these stem from a deeper divide: the degree to which a person has trust in the system.  As a lifelong liberal recently cast into the netherworld of distrust of both parties that one necessarily acquires when journeying down the Bitcoin rabbit hole far enough, I feel reasonably qualified to speak to the liberal condition.

At the heart of liberalism is a belief that the system can work, if it could just be architected well enough and administered competently and compassionately.  My personal journey to Bitcoin maximalism involved a painful dissociation from this fundamental worldview, specifically in the course of digging in to understand central banking monetary policy and the irresistible levers that come with it.

As an aside, I went to the best business school in the world and they didn’t teach us anything about that.  For what it’s worth, I don’t think that this was a knowing or malicious omission.  I think this battle was won 100-years ago, in Keynes’ day, with the self-serving support of governments weighing heavily on the outcome.  Which is to say, my professors learned from Keynesians who themselves learned from Keynesians.  The business leaders and educators of today are completely unaware that they are passing on the shoddy propaganda version of monetary theory as a result of the largely successful ideological extermination of sound monetary theory.

But I digress, if we take Murad’s IQ framework, split the $250k believers into their respective groups, and add the dimension of trust in the system’s ability to work, we get something like this:

If this is a reasonable representation of reality, there are a number of insights we might draw from it:

The upper right quadrant of the chart also happens to be the native home of the yuppie elite.  To succeed in the educated, professional class, you have to be smart.  But it’s also crucial that you know how to fit in, be a good team player, navigate industry politics, be polite and likeable, and above all be a good foot soldier willing to sacrifice for your employer.  The requisite core belief to be able to be all of these things is trust in the system – trust that if you are a good employee and play nice with others, that you will be rewarded via promotions and social standing.  In this sense, if we were to plot where the yuppie elite live on our graph, it would look something like this:

As you can see, the empty corner of our 2×2 matrix is exactly where the MBAs and other yuppie elites are.  From their vantage point, belief in Bitcoin is a peculiar phenomenon that will surely go away.  None of their yuppie elite friends believe in it, and since they don’t know much about Bitcoin, they don’t draw any distinction between Bitcoin moonism and Bitcoin maximalism – it’s all lumped together for them.  As a result, the yuppie elite tend to view belief in Bitcoin like this:

Unfortunately for them, this perspective makes them unlikely to seriously consider Bitcoin on its own merits.  Part of what makes this disinterest so resilient is that it falls into a neat heuristic pattern like many other things in the yuppie world.  The yuppie elite are accustomed to having the best information, the best education, and the quickest knowledge of and access to trends.  Yuppies believe they are the people in the know.

When you’re in the ivory tower, you think the term “ivory tower” is a silly misrepresentation of your very normal life; when you’re no longer in the ivory tower, you realize how willfully out of touch you were with the world.  Part of being in the ivory tower means being in a socially insular bubble, interacting only with other elite yuppies.  The natural outcome of this is that you tend to believe things are important and worthwhile if the other yuppies in your social network believe they are – after all, yuppies are the people in the know.  Conversely, if people outside of the yuppie social world are engaged in something but other yuppies aren’t interested in it, it must be something for people not in the know.  In this case, the lack of belief in Bitcoin among the yuppie elite combined with the significant interest in Bitcoin among non-yuppies triggers a clear pattern-recognition response: Bitcoin is for people not in the know.

A second characteristic of yuppies also helps ensure that this heuristic label is not easily revised: as smart people who are good at navigating the world, yuppies need to understand something in order to believe in it.  That’s how they’ve done well in life so far, so that’s what they’re sticking to.

Ironically, it’s adherence to the central ethos of Bitcoin that keeps yuppies from investing in Bitcoin: don’t trust, verify.  I have a childhood friend who is a sailboat captain for a living.  In his mind, I am one of the smartest people he knows.  When I strongly recommended that he look into Bitcoin, he bought some that same night.  He didn’t verify my thesis for himself, he trusted me.  The same is not true for my yuppie friends – they know it is unwise to invest money in something that they do not understand.  At the same time, they lack the time, conviction, and persistence to replicate my years of research.

What’s more, Bitcoin’s surface layer provides it with a subtle camouflage.  The first hour or two of learning about Bitcoin triggers a multitude of scam red flags.  For the business and financial elite, who have honed their heuristic abilities for filtering out the deluge of noise they sift through on a daily basis in order to be effective in their professions, these red flags are a non-starter.  For their entire adult lives, they have been reinforced to think within the box (often while calling it “out of the box thinking”).  The odds that a new piece of information comes along, for which an hour or two of investigation creates more confusion than answers and yields several red flags, but actually turns out to be an outstanding investment are vanishingly small.  That’s what heuristics do – filter out the garbage based on a cursory investigation of substance.  A typical member of the yuppie elite flags Bitcoin as garbage to be ignored upon their first investigation of its merits, and because of the groupthink of yuppies only paying attention to what other yuppies are interested in, that’s where Bitcoin remains.

Of course, this will all change as Bitcoin’s mechanics continue to play out, making Number go Up.  In time, everyone will have to face the painful realization that their reasons for writing off Bitcoin were wrong.  Because of the dynamics at work with the yuppie class, it may take longer for them to come around to Bitcoin than with most new technologies or trends.