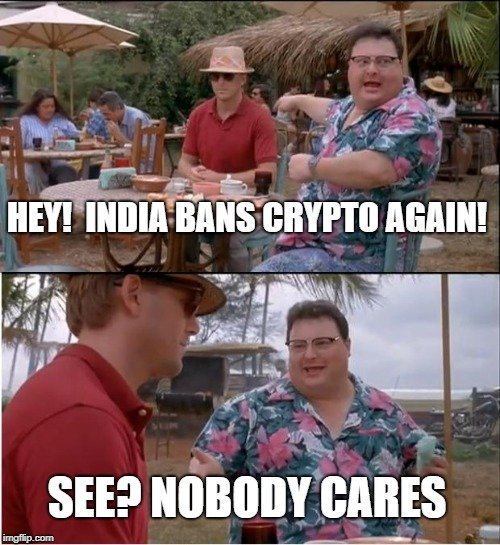 While nation states far more powerful around the world have realised that you can’t put the cat back once it is out of the bag, with FATF releasing it’s guidelines and China giving bitcoin the status of protected property, the plebs in the Indian government want to continue on their path to attempt ban on all cryptocurrencies.

The official report along with the draft bill titled “Banning of Cryptocurrency and Regulation of Official Digital Currency Bill, 2019” was released on July 22, a day before the Supreme Court was scheduled to hear the crypto case. It proposes a complete ban on any kind of cryptocurrency even though the committee recommends the push for adopting blockchain and DLT. The chairman of the committee writes:

Committee is very receptive and supportive of distributed ledger technologies and recommends its widespread use in delivering financial services. It also opens up door for a possible official digital rupee. Private crypto currencies are of no real value. Rightly banned.— Subhash Chandra Garg (@Subhashgarg1960) July 22, 2019

The Indian Crypto community has been vocal about the blanket ban and advocating for regulating the industry.

1/10
The Internet was originally built for military communication without the need of a central authority.

Today it has hundreds of other use cases.

Bitcoin was originally conceived as an alternate currency.

But there are thousands of Crypto Assets being built on Blockchain— Nischal (WazirX) ⚡️ (@NischalShetty) August 10, 2019

India may lose $13 Billion worth of crypto market

In a recent article Sidharth Sogani, the CEO of blockchain research firm Crebaco Global Inc, estimates that India will lose around 84,000 crore INR or $12.9 billion worth of market if cryptocurrency is banned in the country. CREBACO estimates:

To add to this, India has one of the cheapest electricity and there are immense mining opportunities in places with low pressure Natural Gas like Gujarat.

While it is true that India will lose out on a lot of economic activity and progress, the real loss is the cultural loss of transitioning to a sounder money. India used to be called sone ki chidiya even until after the British looted her to the core. There is a reason why people all over the world still travel to India to connect to their spiritual being despite being ravaged by fiat money, socialism and impotent leadership. The real loss of banning bitcoin and the liberty of the markets to choose the soundest money is the loss of it’s remaining culture and the soul of India. It is the people of India that will remain poorer than the rest of the world when Bitcoin becomes the reserve currency. It is killing the ambition of 1.4 billion citizens to become a superpower. But if anything, the CREBACO report reaffirms the fact that the Indian people are smarter than their government and will find their jugaad around this “ban”.

Today we reveal the most legal way to deal with cryptos in India after RBI restriction comes into effect. Do share it and help spread the word! https://t.co/upZk4iN7A3#blockchain #cryptocurrency #isupportcrypto— Nischal (WazirX) ⚡️ (@NischalShetty) June 27, 2018

All of this only drives home the point that the Indian leadership is absolutely clueless about what it is dealing with as we pointed out in our previous article, India Banning Bitcoin . LOL. and that their only objective is to make a fool of themselves while attempting to convert this peaceful classically liberal society into an authoritarian dictatorship.

None of this affects a hodler of last resort. One thing we may suggest them is this crackling lamb recipe in the face of the current beef ban and the Banning Bitcoin soap opera as highlighted in this tweet by Saifedean. We would also extend a helping hand to our honorable leadership to understand what they are up against, we suggest the following to get them up to speed: