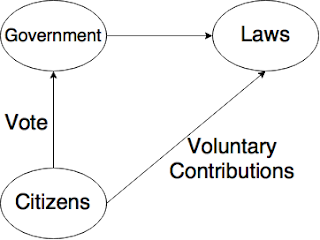 Under our current system of government:

Crowd Funded Government proposes changing the relationship between the citizens and the laws:

Instead, each government department issues a budget with a detailed list of programs. Each program identifies how it would operate with various levels of funding. The citizens then voluntarily contribute to only the programs that they support. Programs would only operate with the support of citizens. Programs that are only supported by lobbyists would not receive funding. Unpopular programs would cease to exist.

Continuing this example, Fiscal Year 2030 would begin the operation of the programs using the funds collected in Fiscal Years 2027 and 2028. Additional funds that are needed during Fiscal Year 2030 beyond what was collected for the budget would be paid for using a daily discretionary spending account. Voluntary contributions would be solicited frequently for the daily discretionary spending account, which would allow the government to provide immediate funding to programs that have needs that were not known during the budgeting process.

Crowd Funded Government would require no loans in order to operate. However, many governments have existing loans that need to be paid off. The schedule of principal and interest payments due on existing loans would be calculated for the upcoming fiscal year, and then those payments would be deducted from the total collected from that year’s voluntary contributions.

Crowd Funded Government would require a special government department in order to effectively operate. This operations budget would be deducted from the total collected from that year’s voluntary contributions.