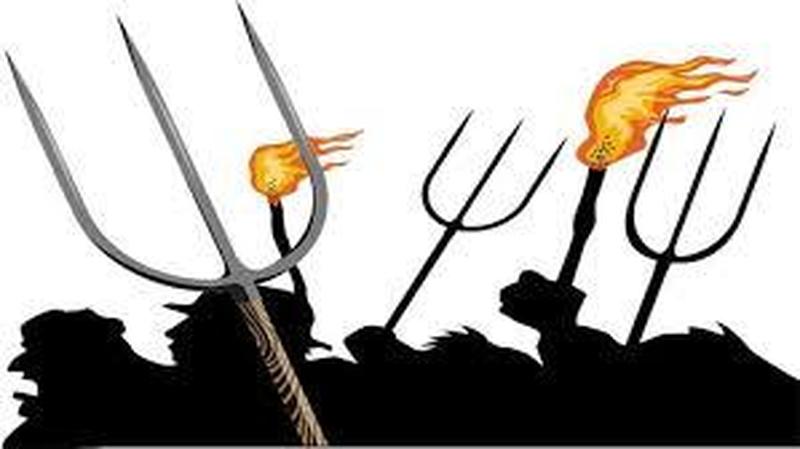 ILR comment: The observations here are perfectly applicable to the Indian context

Let’s get to the bottom line on all this “rate cut” nonsense.

The Fed made a fatal mistake in first promoting “fiscal” actions (during the 08 crash) and then continuing to support them well after the bottom in 2009.  This allowed Barack Obama to run trillion dollar deficits for years and, once he did so to push policies that were economically bankrupt (e.g. the ACA) and got them embedded it was faced with the reality of the creature of its own design.

It appears that Yellen thought she could leave her office with a belated “goodbye” of “normalization”, after having been complict herself, and evade the impending blow up — at least until after her chair had cooled off from her ugly ass sitting on same.

Powell not only ratified Bernanke’s policy he doubled down on his and Yellen’s insanity instead of putting up the middle finger when Donald Trump was elected.  By supporting Trump’s crazy deficit spending ramp he managed to stick ~30% on the stock market at the cost of trapping The Fed, permanently, in financing deficits.

If there was no cost to the real economy or real people in doing this it would defensible.  But there is such a cost, and it falls on 90% of the population — which owns only a tiny percentage of equities.  Worse, that cost falls not only on savers but those who have a fiduciary responsibility toward safety and return, which also typically have as their beneficiaries that same 90% of the population!

Then there’s the impact on state and local governments who can’t earn that return either and thus this ramps property taxes in response.  And while ultra-low rates seem to be good in some other places (e.g. home values) that’s a chimera.

Let me explain: A boom in home prices screws basically everyone in the general public.

Think about it for a minute.

Of course the Realtor loves this because 6% of $300,000 is 50% more money than 6% of $200,000.  And the bank loves it too because they to charge a percentage interest on the principal, MSRs are typically computed not on a “dollars per loan” but as a percentage and similar.  The insurance company loves you too, because the higher “value” means premiums go up, since if the house burns or is hit by a tornado the loss is higher.  And the city loves it because millage is just a fancy word for percentage and they get it every year.

How do you win?  Well, only one way: When you die!  You see, if you move you sell your bubble house but you must replace it with something, and that’s another bubble house!  The only way you “win” is when you don’t need a place to live, which only happens when you croak.

Of course the persons who really lose are those who don’t have houses already.  But don’t think for a second that being a “homeowner” means you win from a housing bubble.  Nope.

Why in the Hell would you want housing prices to go up unless you’re (1) a banker, (2) a Realtor or (3) a City or County official?  Nobody else wants prices to go up!

Why have not everyone, ex the Realtors and Bankers, rioted already and burnt to the ground both The Federal Government and Federal Reserve for this bullcrap?

BECAUSE YOU CAN’T THINK YOUR WAY OUT OF A WET PAPER BAG, THAT’S WHY.

How about health care?  The latest MTS is out and as is the usual for September they played games.  That’s a nice way of saying they intentionally didn’t pay people at the end of the fiscal year to cook the books.  It’s not like this is a new game but the shortages are pretty impressive.  About $30 billion for Medicare and Medicaid, for example.  Then there’s Veterans’ Affairs that has required $200 billion this last fiscal year but somehow, magically, only required $9 billion last month.  Uh huh, roughly half the monthly run-rate — do you really expect me to believe that?  Then there’s “Civil Defense Programs” that somehow manages to need only $826 million but has a run rate of nearly $61 billion annually.  What?

This isn’t new, Mnuchin is doing nothing different than any of the previous *******s that warmed the chair he sits in.  While last month (which is a tax payment month) reported an alleged “surplus” for the month it was damn close to even had the games not been played.  Of course that would make the red ink look even worse, so cooking-the-books it shall be.

Just wait until you see all those vendors who scream and thus have to be paid in October and November!

How does this all tie in?  Simple: The Fed is driving the asset bubble so The Federal Government can run a trillion dollar deficit and not have their budget blow in their face.  This means suppressing rates, but doing that only works to a point, because eventually the fact that you still need the loan for the house and the principal still has to be paid irrespective of the interest rate chokes off demand.

It also chokes off net investment which it is already doing and Powell got questions on that this time around.  He doesn’t have an answer other than “we’re monitoring that” but he knows damn well that the no matter how cheap the money is when you drive up the capital cost sufficiently, which is what “lower for longer” does, the acquisition for investment still can’t be paid for.

This is where the foldback comes from folks.  It comes slowly at first and the signs of it are out there right now.

As pressure builds eventually GDP and hiring will start to roll over.  Which, of course, will goad the Federal Government into trying to support asset — read “stock” prices — with even more deficit spending and even lower rates.

There’s a coffin corner lurking out there when these policies are used in that negative rates are deflationary.  Think about it — you pay $10,000 and get back (10 years later) $9,000.  That’s deflation.  Their very presence doesn’t stoke inflation it’s directly deflationary, and the further you go down that road the worse it gets.  It’s not possible to create inflation with a deflationary policy.

Powell knows damn well that problem lurks out there because Japan has done it and found the corner yet they haven’t managed to get out of it despite claiming they can “any time they’d like” for the last 20 years.

How do you get out of it?  Boost rates, force the liquidations and those who are levered all go bankrupt.  Asset prices tumble and once the malinvestment has been sorted out people can afford to buy assets with their economic surplus once again, instead of playing the “pull forward” and “turn the crank” game.

Now how ugly does that get when the biggest borrower and more than a third of what is being spent by the Government is in Medicare and Medicaid?

Better not need either, for openers.

You should have found your pitchforks and road flares in 2008 folks.

I, and a few others, warned y’all.