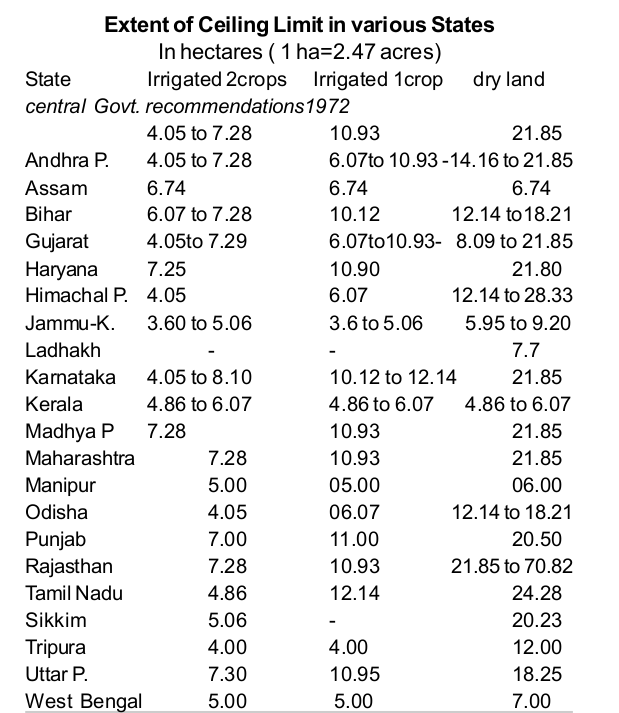 This is the Part 3 of our series of articles on Anti-Farmer laws, based on the book by Amar Habib. The book can be downloaded here (see also for Hindi and Marathi version).

What object might have been behind enactment of Ceiling Act?

In the relevant period, Bolshevik revolution had taken place in Russia. Lenin had nationalized land. Its resonance was echoed world over. Against this back drop, the process of making of Constitution of India had been initiated. A proposal for nationalization of land had come before Constituent Assembly. It was deliberated at length. As it was opposed by Rajagopalachari and others, ultimately the proposal was rejected. The people who were interested in nationalization of land were insisting on re-distribution of land. People had animosity towards Zamindars. This emotion was utilized to bring in Ceiling Act.

On the excess land released from Ceiling first and original ownership of government is noted. Then the name of the persons to whom it is given for cultivation is entered as cultivator/possessor. Landless possessor is secondary owner. Not primary owner. He can only cultivate the land. He does not have any other rights of ownership. What this means is that the land released from Ceiling becomes owned by the government. Even if it is the excess land, it will be owned by government. It can be reasonably guessed that the hidden agenda behind this might be nationalization of entire land progressively.

The Act had other objectives also. In our country industrialization began to take roots in the British era and innumerable farmers and rural laborers migrated from village to cities in hope of employment. This experience was already gathered. The country had become newly independent.

Industrialization was the priority of the government. If people came in cities in very big numbers, it would not be possible to provide them employment, the cities would face the strain, therefore the strategy of retaining them in agriculture seems to have been designed. This Act might have been brought to retain maximum people on the small pieces of land.

It was an era of scarcity of food grains. The strategy of confining maximum people in agriculture to make them earn livelihood from agriculture and produce food grains required for the nation, may be behind this.

Rulers had some kind of grudge towards agriculture and farmers. They had in their mind, never mind how the farmers lived, ‘India’ must be developed. Nay, fetters might have been applied to the legs of the farmers by accepting the principle that India would not develop unless agriculture was exploited.

Why there is opposition to Ceiling Act?

The land has been fragmented into very small pieces. About 85 percent of the farmers in the country are small or marginal. Average holding in India is 1 hectare. It means 85% farmers make a living on an area less than 2.5 acres. The families of the farmers cannot survive on dry land measuring 2 or 2.5 acres. Fragmentation of the lands has been a major problem.

This Act restricts freedom of individual and is unconstitutional. As a result of this Act, the farmers cannot follow their occupation freely.

To join the competition in the world, direct capital investment in agriculture is very essential. Nobody will invest for owners of small parcels of land.

Due to restriction of the holding limits of area under cultivation, the competent persons desirous of proving their ability in agriculture lose enthusiasm. For these and many other reasons, Ceiling Act must be abolished.

What is the exact nature of Ceiling Act?

Agricultural Land Ceiling Act is in the jurisdiction of State Government. Diverse States provide different limits of the Ceilings. In Maharashtra the limit is 54 acres for dry-land and 18 acres for irrigated agriculture respectively.

When the Zamindari Abolition Acts were passed in 1951, some people approached the courts against them. Patna High Court ruled against the Act and held that it was unconstitutional. Immediately on pronouncement of this judgment schedule IX was incorporated into the Constitution. Two other High Courts had ruled in favor of the government. Some contemporary senior Members of Parliament had advised that appeal could be filed before Supreme Court against the judgment delivered by Patna High Court. But the Government was in no mood to listen to anybody on anything. Later on Ceiling Act was passed and it was also included in the Ninth Schedule. Jurisdiction of courts is barred in respect of Acts included in schedule IX. As a result, this Act has prevailed for so long. It is like as ‘they came for hunting a rabbit but burned all the jungle’.

How is the Ceiling Act discriminatory?

that owners of 54 acres are now difficult to find). Against this, Ambani’s wealth is of a few lakh crores. He can hold it at pleasure. Is this not discrimination?

on the number of heads a barber should shear or the number saloons he should set up. Traders, industrialist, professionals, nobody is subjected to restrictions. The restrictions are imposed only on farmers. If this is not discrimination, what is?

Wasn’t abolition of Zamindari an object of Ceiling Act?

It is true that as Vatandari and money lending prevailed in India the lands of many farmers were grabbed by a few persons. It was the demand of justice to seize the lands from them and return them to the original owners of the farms. After independence this task could have been finished within 10 years by establishing special courts. A campaign like ‘zamin wapasi’ could have been undertaken. It was not necessary to impose limitation on the properties of others.

Here, it needs to be understood that ownership of large tracts of land does not mean Zamindari. Zamindari comes into being, when the people working on that land are made bonded laborers. Zamindari cannot exist in a society where there is no bonded labor. After the formation of UNO, human rights got prominence all over the world. In original Constitution of India, bonded labor has emphatically been opposed. Zamindari system cannot survive where bounded labor is treated as illegal and human values are given pride of place.

In sum, Ceiling was absolutely unnecessary forabolishing Zamindari. Perhaps it was not even the objective.