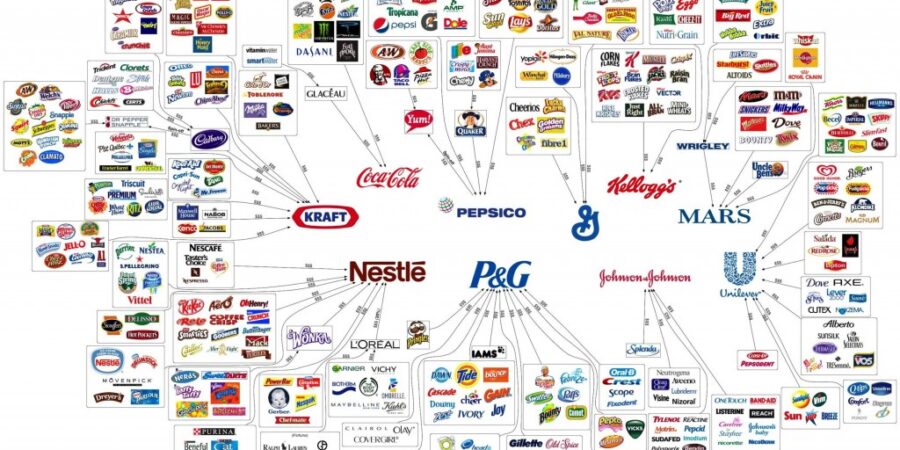 It is commonly believed that market competition leads to monopoly. Industries start out small with startup firms trying to out-innovate each other. But, in time, this competition gives way to economies of scale as competitors merge or take over each other. Competition thus leads to imperfect competition and oligopoly, and eventually to monopoly. The remaining firm, if unregulated, can then jack up prices to exploit consumers.

Even great economists have held this view. For example, Joseph A. Schumpeter argued the resources available in larger firms means they can afford large R&D investments and will therefore out-maneuver smaller firms. (Yet, at the same time, Schumpeter observed that disruptive innovations often take place in new, small firms.) This, to Schumpeter, means capitalism leads to the end of capitalism.

Similarly, progressive economist and Nobel laureate Joseph E. Stiglitz argues that inequality is the result of too large and influential firms extracting rents from government, thereby allowing them to become even larger and their owners even richer. Inequality, therefore, is to Stiglitz a problem of capitalism and, specifically, the size-based influence of large corporations.

Politicians of course subscribe to this view as well, since it gives them the seemingly beneficial role of counteracting the market’s tendency toward monopoly and breaking up already existing monopolies.

But is it true that market leads to monopoly?

Ronald H. Coase, another Nobel prize laureate, asked the question that seems at the core of this apparent tendency: why is there not one single firm? To Coase, the market is burdened by transaction costs (basically, costs of imperfect information) that can make coercive direction — management — cheaper than market transacting.

In other words, there are firms — or, in the words of D. H. Robertson (quoted by Coase), “islands of conscious power” — because they economize on transaction costs. This is the rationale for firms, Coase argued. But there are limits to the ability of managers and diminishing returns to management, which is why there won’t be a single firm. To Coase, then, we see firms because the market is costly, but firm size is limited because, in a sort of Hayekian twist, the managers suffer from a knowledge problem.

Murray N. Rothbard adopted the Coasean argument but with a properly Misesian interpretation. Rather than a transaction cost-based knowledge problem of resource allocation, Rothbard noted that it is a calculation problem. As he writes in Man, Economy & State (p. 613), “if there were no market for a product, and all of its exchanges were internal, there would be no way for a firm or for anyone else to determine a price for the good … this economic law sets a definite maximum to the relative size of any particular firm in the free market.”

To Rothbard, then, there is an upper limit to firm size due to the problem of economic calculation. Within a sea of market prices, firms can grow large for the same reason that the Soviet Union and other socialist regimes can avoid immediate meltdown. There are market prices between firms that offer sufficient but not perfect guidance for how and whether to utilize productive resources.

While the calculation argument is accurate and places a limit on firm size (the number of stages of production internal to the firm), it misses the point by adopting an erroneous assumption: that, to paraphrase Oliver E. Williamson, another Nobel laureate, “in the beginning there were markets.” There certainly were not.

Most theories of the firm get the economic process backward. Certainly, we see firms created and then grow big in the market. But this fact does not mean the actual process is one from decentralized and dispersed market production toward one of integrated, large-scale production. Instead, as I show in Problem of Production the process is exactly the opposite.

We can see how this is true if we look at the creation of new markets rather than new firms within existing markets. To produce a completely new good, the production of it must be integrated. It is crazy to assume that there are suppliers with specialized inputs waiting for the new innovation to happen. For innovative entrepreneurs, the problem is not one of overcoming the transaction costs that burden market exchange but how to create a complete production process that accomplishes the good that offers anticipated consumer value.

Rather than a problem with market exchange or efficiency in production, the entrepreneurial problem is one of creating value. If the entrepreneur creates sufficient value, others will follow suit and attempt to capture those profits. And they do so by adding their own thinking to the original innovation, improving both production processes and the consumers’ good as a result.

As market prices for parts of the firm are determined, the inefficiencies within firms become apparent and, as a result, firms dissolve into market. In other words, the real life cycle of the firm is one from vertical integration (planning) to market.

How does this help us understand the common perception of markets leading to monopoly? In addition to stating that the process is simply false, which it is, it allows us to identify that there are other factors involved that affect firm size within markets. That firms should over time dissolve into decentralized market transactions means there must be a specific reason why firms survive in the long term and even grow very large.

There are several explanations for this, but the economic superiority of planning is not one of them. One such is in line with Schumpeter’s argument mentioned above: existing firms can (and, in a sense, must) reinvent themselves and produce new innovations to not be replaced by market transactions. We see this throughout the market, but perhaps most obviously in the technology sector and the vast innovation budgets in corporations like Microsoft, Apple, and Google. They would not remain profitable without innovation.

There is also an argument to be made for economies of scale, although I doubt it is as important as most seem to assume. This is an issue of production technology, specifically the use of capital to greatly increase the output per hour of labor invested in production. Economies of scale are a problem for entrepreneurs, as a startup needs to first figure out the value of what they produce.

Entrepreneurial production is often — and should be — done small-scale using highly flexible and adjustable production processes using technology that is effective at that scale but hopelessly costly at larger scale. Economies of scale come into play after the market value of a good has been discovered and consumer demand appears to be way beyond what existing firms are able to satisfy.

At this point, these firms can invest in increasing output. But they would typically do so while at the same time shedding stages of production that are no longer necessary to carry out internally — they thus “shrink” in terms of vertical integration while expanding production volume. This is a race to the bottom as competitors attempt to undercut each other by offering ever lower prices, eventually reaching the minimum production cost. This process can at any time be disrupted by new innovation.

But, more importantly, existing firms benefit from barriers to entry. These can be erected by the firms themselves by strategically establishing a competitive advantage (a moat in startup terminology) through which the competition is kept at a distance. A much more problematic barrier to entry, from the point of view of market progression and economic growth, are those raised through policy. Intellectual property, licensing, certificate-of-need laws, and practically any regulations that increase the costs of production (including minimum wage laws) favor incumbent firms and allow them to grow large.

Also relevant to explaining firm size is the issue of externalizing costs of production and thereby establish production volumes beyond what would be cost-effective in a free market. For example, pollution allowances and subsidized transportation both lead to economies of scale being artificially beneficial at extreme production volumes. This raises the bar for new entrants and thus protects incumbents, which can grow artificially large, as the costs of scale can be externalized (for instance, by producing in countries where the costs of pollution are to a much greater extent covered by the population and through utilizing artificially cheap distribution through free waterways or highway systems).

To conclude, the existence of very large firms may not be a problem but are often symptoms of a disease. It is perfectly possible for a firm to grow large by outcompeting other firms by having unusual ability to produce value for consumers. But this is typically a temporary effect due to luck or extraordinary entrepreneurial ability, and the firm will itself be outcompeted by new innovations.

Typically, however, huge corporations — and especially lasting corporate empires — are creatures of marketlessness. Their enormous size is an indication that they benefit from artificial barriers to entry, and thus that entrepreneurs are kept from competing with them (directly or indirectly). Rather than a result of competition, as is often claimed, monopoly and huge firms are the result of lack of competition and market processes.