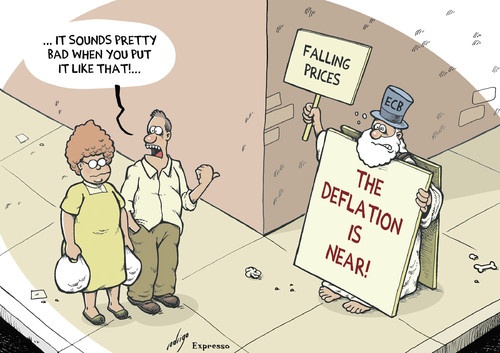 Excerpts from an article by Éric Verhaeghe

Deflation is the old sea serpent of economists. It arouses their anxiety because it occurs when demand is structurally less than supply. Producers are then forced to produce less and less to avoid having to constantly lower their prices to sell.

According to these economists, this deflationary spiral therefore results in a permanent drop in production, therefore in income, and therefore in demand. In this sense, it is considered synonymous with a deep economic depression.

Does deflation only have bad effects?

But is this aversion of official economists to deflation really founded? A first answer is in any case to assert that deflation usually occurs when households increase their savings rate and consume less.

Deflation produces debatable effects on financial and real estate wealth. Generally speaking, the question is not whether the value of this wealth declines with deflation, but whether or not it declines faster than all prices or incomes.

On this point, the combination of returns may prove to be much more beneficial to owners of wealth than inflation. Let’s not forget that the 20th century has ruined the fixed incomes of annuitants through rampant inflation …

Deflation and standard of living

For consumers as a whole, deflation isn’t necessarily bad news either. A fall in prices is in fact equivalent to a marked improvement in the standard of living. It increases purchasing power while lowering wages.

Far from constituting a social difficulty, it is on the contrary seen as a blessing, insofar as it results in a fall in the prices of basic necessities.

Deflation has a negative impact on supply, but it is more favorable to demand… with lower prices actually constituting a supply response to insufficient demand. For the social climate, it would therefore not be such bad news.