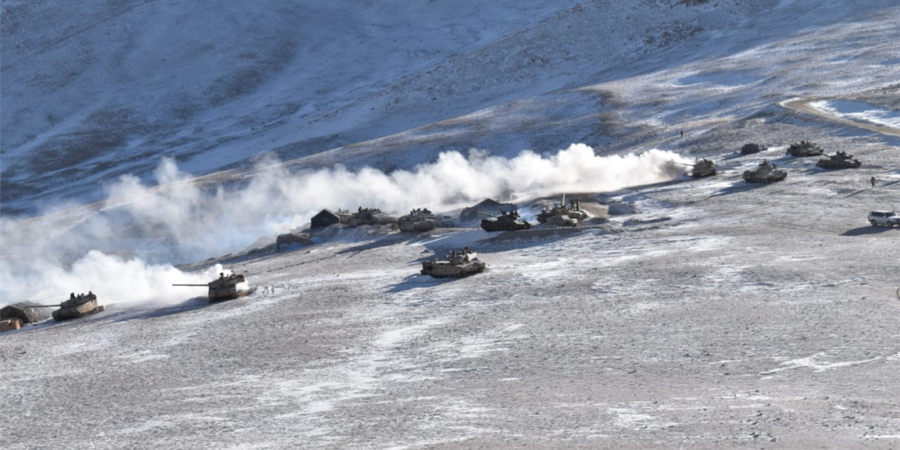 Interviewed by Rediff.com; a botched and truncated version published Feb 22, 2021, at
https://www.rediff.com/news/interview/ladakh-standoff-indian-armys-advantage-has-been-lost/20210222.htm

The full interview below:

Q 1: Do you see the ongoing military disengagement in Ladakh between the Indian and Chinese troops as having helped the Chinese consolidate on the gains they have made in Ladakh in 2020?

A: Definitely yes. The military advantage the Indian army had gained by the Special Frontier Force occupying the heights of the Rezang La-Rechin La ridge on the Kailash Range is lost without the PLA withdrawing to east of the Khurnak Fort line – where the Indian claims lie, rather than only some distance from Finger 8 on the northern shore of the Pangong Lake to the Sirijap Plain.

And the Chinese continue to obstruct Indian patrols seeking legitimately to access Indian territory northwest-wards of the Y-Junction.

Having achieved success at the negotiating table in getting Indian troops to climb down from the Kailash range hilltops, and India to accept Finger 3 as the limit of its army’s presence in the Pangong area (forsaking, in the process, Indian claims over the entire swathe of land stretching from Finger 4, past the Sirijap Plain, to way east of the Khurnak line and then, as expected, stalling the 10th round of talks (that occurred) a couple of days back at the Corps commander-level talks when it came to discussing the steps to lift the blockade and allow Indian patrols to Hot Springs, Gogra and other points northwestwards, the PLA is sitting pretty.

And because the Chinese are big on symbolism, it may be noted, the PLA have fielded its so-called “southern Xizang (Tibet) military district” head Major General Liu Lin, junior in rank to Lieutenant General PK Menon, commander of XIV Corps at these border talks. Having recognized the rank-asymmetry — meaning the PLA had assigned less importance to realizing peace then the Indian side did — after the first such meeting last year when the then Leh-based Corps Lt Gen Harinder Singh officiated, the Indian army should have immediately followed up the next time around by sending Liu’s rank equivalent — some Major General, any Major General, from that formation.

Losing out thus in both symbolic and substantive terms, how’s any of this a success for India?

Q. 2: I am going to quote from a recent article of yours which stated `New Delhi’s desperation has led to a peace process of impermanent but linked des-escalations, which Beijing may convert into opportunity for annexing territory in small parcels’. Can you elaborate on this given that several defence analysts believe China is already sitting on over 60 square kilometres of Indian land taken in 2020 while the fate of the land taken in the Depsang plains is hanging in the air. Your comments.

A: Depending on how scrupulously one tabulates exactly how much Indian territory has been ceded, lost, or simply been eased out of Indian control by the inattentiveness and laxity of Indian forces – the army and ITBP — over the years compounded by the la di- dah attitude of the Indian government to such loss, the actual territorial gains to China may be quite considerable over the 3,400 km length of the Line of Actual Control. So 60 sq kms here, 1,000 sq km there (in Depsang) could only be the proverbial tip of the iceberg!

Q.3: Up to last year, India was patrolling all eight Fingers on northern shore of Pangong Lake as these were on the Indian side. Today this has been reduced to the area between Fingers one to three. Can you elaborate.

A: The astonishing thing is the Indian army stopped contending for the land east of Finger 8 for many years until now when Indian army has effective control only up to Finger 3. In effect, the Sirijap-Khurnak expanse has been permitted to slip into China’s lap without so much as a squeak from Delhi! India and its army seem to have no answer for this Chinese policy generally of creeping territorial aggrandizement.

Q.4: It is believed that this disengagement and the ones to follow after subsequent talks is taking us to the 2013 line. Do you think that is so? Then how are we going to see any kind of status quo ante at all in Ladakh?

A: I fear that the manner in which India has accepted the process of, and the conditions for, the mutual “verifiable” pullback by the forces, the Indian government may be preparing to accept the expansive Chinese claim line articulated by Premier Zhouenlai in his November 7, 1959 letter which Prime Minister Jawaharlal Nehru roundly rejected. This Chinese line was to protect the Tibet-Xinjiang Highway the PLA had completed by 1957, which cut through the northern part of Indian Aksai Chin, with the additional territory sought as buffer.

Q.5: About ten days after India occupied the Kailash Range within the areas held by it, the Foreign Ministers’ of India and China reportedly met in Moscow on the Chinese request. It is believed that the Indian Foreign Minister Jaishankar and his counterpart had arrived at an agreement about the broad terms of disengagement. Is this perception correct and what are your views on this?

A: Not sure what agreement Jaishankar hammered out with Wang Yi in Moscow. But it certainly did not achieve then, or in subsequent meetings at various bilateral civilian and military levels, what he repeatedly and publicly identified as the Modi government’s priority – “restoration of status quo ante”.

Q.6: There is a perception in the Indian army that the Ministry of External affairs is always ready to give up any military advantage it has obtained where China is concerned, but does not require the army to back down vis a vis Pakistan. It leaves the Indian army weaker in future discussions with China?

A: This may be the case because of higher political direction of Pakistan policy by the PMO whereas in the case of China, it is usually left to the China Study Group (CSG) and MEA to cull the options and even choose one. Except the CSG is made up of Mandarin-speaking diplomats, intelligence officers, and the like and has long distinguished itself as a den of China appeasers.

Q.7: You talk about how India should have adopted a more proactive approach against Beijing such as having cleared the Y-junction by use of force and counter-blockading the PLA in Depsang. But how will it work when the Chinese army is effective in the use of force?

A: The Indian government and army have to decide whether, because they fear tensions escalating into hostilities owing to the Indian reaction, they are willing to let China have its way. If sticking by India’s traditional claims of the LAC in eastern Ladakh and elsewhere is important, then it is time the army made a stand. Its Special Forces acting covertly should be ordered to vacate the PLA blockade and, to give Beijing pause. Simultaneously should be announced the deployment of the N-warheaded 700 km-range Agni-1 medium range missile units to the theatre. All military actions have risk, but being institutionally risk averse has not served the country’s interest and has earned India the reputation of being a country that can be pushed around by China. It has hurt India’s regional and international standing. Time to change that image with some decisive action.

Q. 8: Why has China refused to discuss Hot Springs, Gogra and Depsang? What kind of bargaining power can we now hope to exert to get the Chinese to move out of these three places?

A: Realistically-speaking, India has no leverage to compel the PLA to end its blockade except to signal its willingness to escalate matters, whatever the cost, which Delhi seems loath to do.

Q. 9: Has this happened given that the Indian army is the second largest military force in the world with 1.4 million active military personnel? Would you attribute this to a lack of up to date fighting equipment, ammunition, or logistical support or is it a lack of political will? Surely, we are better prepared than in 1962?

A: The real Indian weakness is not due to any shortfall in deployable military power or even the shortages but in the lack of political will and gumption.

Q.10: What is the fall out of this going to be on our eastern borders between Ladakh and Arunachal Pradesh?

A: None, if we keep our proverbial powder dry! Unless the developments in Ladakh are taken by the army to mean that the government will countenance territorial losses in the northeast as well.

Q.11: What has India done to secure Doklam if China forces Bhutan to vacate its claims on that area?

A: The Indian government has successfully encouraged Thimpu to stand its ground, and the Bhutanese government has complied and rejected Chinese claims on a large part of what is its ecologically protected national park area.

Q.12: What lessons has India learnt from Armenia’s recent defeat and what is India going to do to counter what Pakistan and China are doing to follow the tactics and strategies used by Azerbaijan to defeat Armenia with ease?

A: No real lessons other than this was the first instance of extensive use of armed drones in warfare (by Aizerbaijan against Nagorno-Karabak) and alerts India to what drone warfare may look like and the possibility of the PLA using them on the LAC.