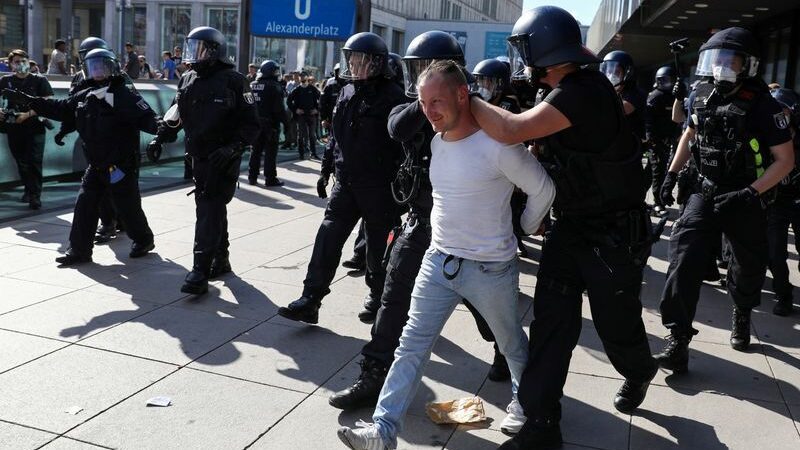 Originally authored in German by Dietrich Murswiek, retired professor of law at the University of Fribourg-en-Brisgau

Politics is transforming a liberal constitutional order into an illiberal pandemic regime. Let the infection numbers sink, and the criteria justifying lockdown are changed without further ado. Not long ago, the goal of lockdown was to drop below a weekly incidence of 50 per 100,000, it has now risen to 35. Many are already asking for it to rise to 10, when it is reached, we can still aim for zero incidence as a prerequisite for the “restitution of fundamental rights” – to be sure that the infection does not flare up again.

To justify this, the Chancellor and the minister-presidents have invoked the precautionary principle: it is not really known how dangerous mutants could be for us, so we should not start too early to lighten the measures. Not knowing would be enough to justify maintaining the most comprehensive restrictions on freedoms in the history of the Federal Republic.

The burden of proof is reversed: it is no longer for the state to prove that limitations on fundamental rights are necessary. On the contrary, citizens can only expect to be granted by the authorities, sparingly, “new freedoms” (says Merkel) when, in the opinion of the government, the danger of Corona has been removed. Hinnerk Wißmann correctly commented: “freedom, which must prove its harmlessness, is abolished”.

The greatest danger to the liberal democratic order does not result from the current restrictions linked to the pandemic, but from the fact that the political mechanisms for the curtailment of freedoms, originally designed to last a very short time – as was announced during the first lockdown and assessed accordingly by the courts – become the “new normal”.

We get used to them, and they are taken out of the toolbox by politicians, as they wish: freedom is no longer in principle unlimited, as in a rule of law, but is granted by the public authorities, when no virus or no event is to be feared, against which it would be advisable as a precaution and attention to guard against.

The Virus is Not Going Away

Sars-CoV-2 will never be eradicated, but can instead always resurface in new waves, even if they are no longer so strong, as the population becomes immune – and with the mutants argument, we will always succeed in justifying lockdowns, and one day, Sars-CoV-3 will allow the game to start again from scratch. There is no return to the normality of the rule of law on the basis of such a pattern of thought.

If we want to save the liberal order and prevent the overthrow of the foundations of the rule of law from becoming the new normal state, we must take a step back and ask ourselves whether the Basic Law (Constitution of Germany) still allows the extension of lockdowns today. What are the constitutional reasons that have possibly made it possible to justify it previously? Are these reasons still valid today?

The official justification for reducing contacts, closing businesses, shops and schools, banning events, etc. was that there was a desire to flatten the infection curve, in order to avoid the threat of intensive care unit overload if the numbers continued to climb; it was claimed to avoid a situation in which every patient requiring respiratory assistance could not be provided with the apparatus they would need, so triage would become necessary.

While originally it was only a question of avoiding severe forms of the disease and the mortality induced by the fact that the saturation of intensive care units would prevent optimal treatment of all patients, we came to over time to give more and more to the Corona measurements the objective of reducing the number of Corona deaths and the number of severe forms.

In the resolution taken by the Chancellor and the Minister-Presidents on December 13, the two goals are again mentioned together. In more recent resolutions, no goal is named. And in many policy statements, it is now no more than avoiding Corona deaths. How should the constitutionality of lockdowns be assessed in light of the stated objectives?

Obviously, people continue to die from Covid-19 even when ICUs are not saturated. Can we justify lockdowns with this argument? Does the objective of reducing the number of “Corona deaths” and severe forms support restrictions of freedoms?

There will always be some risk – not just for unvaccinated elderly people with multiple medical histories. But that risk is no greater than many of the risks that men have lived with forever – at least not so extraordinarily greater as to justify crippling society.

Such massive interference with the freedoms of people who do not threaten their fellow human beings is unprecedented in history. In a rule of law, in order to protect oneself from danger, one should fundamentally only attack those who are the cause of the danger and obstruct their freedom. The involvement of “non-disruptors”, as in legal German we designate those who are not the source of the danger, is only permitted in an emergency, that is to say when there is absolutely no other way to ward off the danger, and only for a limited time.

Restricting the freedom of 83 million human beings who are in no way responsible for the danger to be avoided is an exceptional situation so extreme that it could be fatal for the rule of law if one got used to it and consider it as normal. In one year of Corona, half of it has been spent with inns, hotels and other restaurants closed.

The politicians, in their ‘Corona-fury’ have lost all measure. Statements by political figures such as “every death is one too many deaths” or “life is the most precious possession” have led to an attitude of absolutization of the protection of life. It is not reconcilable with the Basic Law. With good reason, no one has yet come to the idea of ​​ordering containment for each wave of the flu, or of banning motor vehicles altogether.

The policy based on incidence rates now followed by the federal government is irrational and unconstitutional. The incidence rates considered by themselves do not say anything about the dangerousness of the situation. The politician can modify them upwards or downwards, by testing more or less. And they in no way reflect the weight of the obstacles to individual freedoms and the immense collateral damage of lockdowns. For this reason, they are not appropriate to justify restrictions on fundamental freedoms, especially not on the scale of lockdowns.

The reason for the incidence rate of 50 was originally that above this threshold, it would no longer be possible for health agencies to trace the chains of contamination. This has not been true for a long time. As for the threshold at 35 as a criterion for lockdowns, there is absolutely no coherent justification whatsoever. No judge can accept that lockdowns are based on crossing an incidence rate value, unless he sees himself as the creature of government.

The government must now let go of its incidence rate fetishism. Minister-presidents should know that if they persist in following Angela Merkel on the slippery slope of the incidence rate, at the next conference on March 3, no one will agree to believe them if they claim that they were not aware of being illegal.