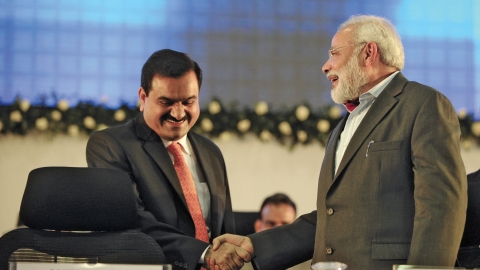 In democracies, successful politicians reward their financiers, the money bags who helped them on their way up. This is a different type of beneficiary than the one who opens up his purse to fill the ruling party coffers during the election season or in the run up to it. The former kind is in some sense a visionary — a person who espies the potential in a politician and is willing to back his hunch to support him, and a risk-taker, because it means alienating the political competition. But when the bet comes good, it doesn’t just rain goodies, it pours.

The Adani Family is headed by Gautam, who vaulted from a small-time polyvinyl plastics importer in the 1980s to head a $12 billion global conglomerate with diverse interests ranging from mining, energy, to infrastructure today. The Adani Group is in this happy position because of Gautam’s knack for political talent spotting. He got close to Narendra Modi whose rapid ascent from RSS pracharak to BJP apparatchik in Gujarat to chief minister and now Prime Minister paralleled the Adani family’s rocketing prosperity until now when Gautam Adani is Modi’s go-to person in the world of finance and industry.

Being Modi’s mascot has helped Gautam A to speedily and vastly diversify his business and industrial interests and the Adani Group to have a solid international presence. The latter’s closeness to the source of power has lubricated the growth of the Adani presence in far-off lands. The Adanis’ controlling interest in the massive Carmichael coalmine project in Queensland that will involve the erection of 9-10 thermal power plants fructified 3 months ago in the teeth of environmental resistance. This may be owed in part to Gautam’s backing Scott Morrison to become the Australian Premier, but equally important was the perception in Canberra that helping the Adanis would win the Australian government the attention of Modi and India. It is no secret that the only other person in the room when Modi met his Australian counterpart Tony Abbott during the former’s state visit in November 2014 was Gautam A, and that the Comprehensive Economic Partnership accord the two countries signed on that occasion pivoted at least partially on the Adani investment in the extractive industry down under coming good.

A go-getter politician’s link up with a go-getting financier is always a paying proposition for the latter. The Birlas and the Bajajs converted their assistance and proximity to Mahatma Gandhi and the Congress Party in the pre-independence era into lucrative licenses and permits Jawaharlal Nehru’s quasi-socialist state bestowed on their one-time benefactors post-1947. Their political investment payed-off handsomely. Little has changed, except the dramatis personae. Dhirubhai Ambani (and now his son Mukesh) and Gautam Adani are the latter day analogues of the Birlas and the Bajajs. What they want they by and large manage to get from the Modi government. The usually obdurate Indian bureaucracy manned by generalist nincompoops is in this situation rendered a willing handmaiden. (The story of just how Mukesh Ambani’s Jio venture has so quickly become a virtual telecommunications monopoly is illustrative of the state of affairs. Refer Daniel Block, “How government decisions are helping Reliance Jio monopolise the telecom sector”, Caravan, 01 February 2019, at https://caravanmagazine.in/reportage/government-helping-reliance-jio-monopolise-telecom )

Infrastructure is Modi’s priority and also it seems of the Adani Group. Other than ports and Special Economic Zones where this conglomerate has invested heavily, Gautam A desires to have an impact in the civil aviation sphere. And so, as India Today (of Aug 26, 2019) noted, the Airport Authority of India, disregarding the Union Finance Ministry’s criteria, swung into action to ensure this Group, with zero experience in airport management, took control of the Thiruvananthapuram airport. Other airports may in like fashion fall into the Adani lap. Concluding along the lines of an intrepid Filipino entrepreneur who with regard to doing business in India observed that “It is not ‘know how’ but ‘know who’ that matters”, a fortnight back the Abu Dhabi National Oil Company (ADNOC), joined with the chemical majors — the German BASF and the European firm Borealis, to partner the Adanis in setting up a $4 billion chemical complex — where else? — in Mundra, Gujarat, a state that boasts the maximum number of Adani investments and projects. (See “Adani partners UAE’s Adnoc, Germany’s BASF for $4 billion chemical venture”, PTI, Economic Times, Oct 17, 2019)

Because industrial/management/manufacturing inexperience and zero domain competence is not a deterrent to the Adanis and the Ambanis in realizing their truly grand ambitions and, in the process, raking in very big bucks in the future, courtesy a friendly political regime, the two Groups have decided they want to become players to reckon with in the defence industrial fields where product (weapon system) price tags increase exponentially every couple of years. Thus, the Anil Ambani-run Reliance Naval and Engineering Limited (RNEL), previously called Reliance Defence, took the short cut to bidding for the navy’s Project 75i to build advanced conventional diesel submarines by buying the Pipavav shipyard. Next it tried to trip up the leading company, Larsen & Toubro, with unmatched submarine making skills and experience — L&T has been the leading private sector entity involved in the secretive nuclear-powered ballistic missile firing submarine (SSBN) programme from its initiation that has so far produced the first of the Arihant-class boats, with the second soon to follow. L&T sought the contract and was an obvious shoo-in because producing the technically far more complicated SSBN would make manufacturing the relatively simpler diesel subs a snap, no? No!

Because RNEL contended the navy’s tilt was due to a son of a Rear Admiral in the procurement loop being employed by L&T. This charge brought the entire 75i project to a juddering stop as the Defence Ministry began its slow, spirit-sapping inquiry. This is at a time when the most worrisome aspect of national security is not the decline in the fighter squadron strength as IAF makes out but the sheer falloff in the sea denial capability of the Indian navy with a fast attriting submarine fleet in the face of an expanding Chinese surface combatant presence in what should be India’s lake — the Indian Ocean.

With RNEL playing interference against and hogtying L&T, the Adanis stepped in smartly for what it believes will be easy pickings. Literally out of nowhere and at the proverbial last minute, the Adani-Group made a bid for the Rs 45,000 cr 75i project to build six conventional submersibles. The wasteful and laggardly Defence public sector unit Mazgaon Shipyard Ltd (MDL), L&T, and RNEL all own shipyards. Adani Group’s chutzpah was in bidding with no shipyard of its own in sight but with a prospective tie-up on paper with another equally hapless DPSU, Hindustan Shipyard Ltd (HSL), which has one in Vishakhapatnam. HSL is infamous for taking over a decade to refit the navy’s EKM Kilo-class subs! By which standard, the first Adani-HSL diesel sub can be expected to take to water in what, 20-25 years from now even with a chosen foreign (Russian, Swedish, French, or German) partner?!!

But the Adanis are nothing if not politically agile. Couple this Group to a politically fleet of foot Original Equipment Manufacturer (OEM) and what the nation gets is collaboration with Elbit Systems of Israel to assemble the dated Hermes 450-class drones, rather than the up-to-date Hermes 900 series. All such projects, including the 75i passing under the rubric of ‘Make in India’ that furthers the aim of full armaments indigenization not an iota.

Indeed, in the case of 75i submarine, as I have repeatedly pointed out in my writings, the scam is bigger and deeper. Barring such technologies as mast optronics and silencing, the country — thanks to the SSBN production capability — has most technologies and wherewithal to wholly design and build conventional subs. In this situation, the reasonable thing for a self-respecting, resource-scarce, country to do would be to just buy a submarine design along with certain select technologies from one of the vendors, rather than the whole boat, leaving the OEM to decide what technologies to transfer to the Indian partner, meaning no worthwhile technologies will ever be transferred. This last is what happened in the past with the French Scorpene where MDL is contracted to import “black box” technologies for the duration of the production run of this submarine from the French firm, DCNS. And this pattern will definitely repeat itself were a new company entirely innocent of any sub production experience, like RNEL or the Adani Group, to be gifted the contract — however this is managed — by the navy at the prompting of the Modi government.

With defence industry suffering from such spurious ‘Make in India’ projects and programmes, can India ever hope to be really self-reliant in arms, really sovereign?