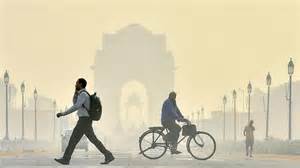 Delhi’s air pollution problem started right after the controversial USAID and Monsanto backed law was implemented. Before this law was passed, the problem in Delhi was limited to vehicular and industrial pollution and there were no reports of the entire metropolitan area being enveloped by smoke. Over a period of several years, it has used the fraudulent excuse of preventing the decline of groundwater to push their agenda.

The Delhi metropolitan area has one of the highest concentrations of population in the world, and suffocating the people of the area on an annual basis should be treated as a crime against humanity, especially when the cause for such suffocation can be controlled.

Until a few years ago, when farmers in Punjab burnt the remnants of the rice crops in their fields in preparation for sowing wheat, the smoke from such fires was confined to Punjab.

According to a publication of the Indian Council of Social Science Research published in 1991, ‘At the end of September and in early October, it becomes difficult to travel in the rural areas of Punjab because the air is thick with the smoke of burning paddy straw.’ Clearly, farmers burnt the straw in late September and early October. However, in recent years, farmers have delayed the burning until late October.

This delay is crucial and responsible for the smoke being carried all the way to Delhi. An analysis of the wind flow patterns reveals that wind blows into Delhi primarily from the west during the monsoon season, but changes direction in October and starts blowing into Delhi from the north.

The decision to delay the clearing of the fields was not the choice of farmers, but was forced on them by the Punjab government which passed the Punjab Preservation of Subsoil Water Act in 2009. According to this law, farmers could no longer sow rice in April, but had to wait until the middle of June. Rice has a 120-day period between germination and harvest, and the restriction on sowing means that the fields would be harvested and cleared only in October by which time the direction of wind would have changed.

Delhi’s problem of being covered by smoke started right after this law was implemented. Before this law was passed, the problem in Delhi was limited to vehicular and industrial pollution and there were no reports of the entire metropolitan area being enveloped by smoke.

This piece of legislation was passed ostensibly to preserve groundwater, the depletion of which was blamed on rice fields which supposedly used too much water and which were prone to evaporation, but this argument is a very tenuous one.