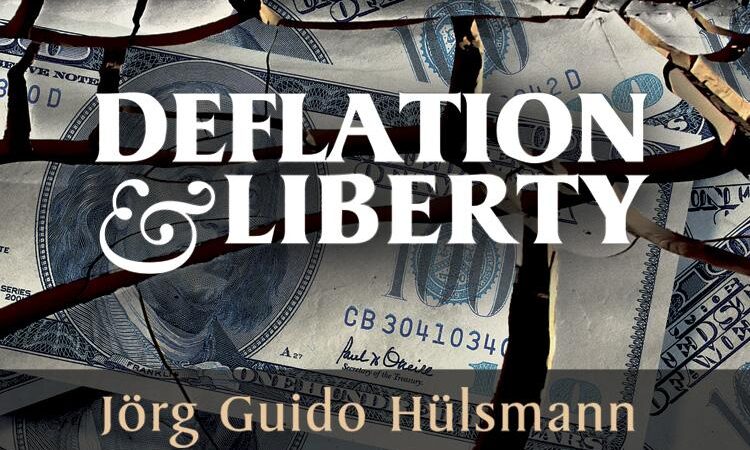 See also our article ‘Uday Kotak has a problem with gold. We’re not surprised‘

FROM THE STANDPOINT OF the commonly shared interests of all members of society, the quantity of money is irrelevant. Any quantity of money provides all the services that indirect exchange can possibly provide, both in the long run and in the short run. This fact is the unshakable starting point for any sound reflection on monetary matters.

And it is the most important criterion when it comes to dealing with deflation. In light of the principle discovered by the classical economists, we can say that deflation is certainly not what it is commonly alleged to be: a curse for all members of society. Deflation is a monetary phenomenon, and as such it does affect the distribution of wealth among the individuals and various strata of society, as well as the relative importance of the different branches of industry. But it does not affect the aggregate wealth of society.

Deflation is a drastic reduction of the quantity of money or of money substitutes, and it entails a precipitous decline of money prices. Such an event, be it ever so dramatic for a great number of individuals, is most certainly not a mortal threat for society as a whole.

Imagine if all prices were to drop tomorrow by 50 percent. Would this affect our ability to feed, cloth, shelter, and transport ourselves? It would not, because the disappearance of money is not paralleled by a disappearance of the physical structure of production. In a very dramatic deflation, there is much less money around than there used to be, and thus we cannot sell
our products and services at the same money prices as before. But our tools, our machines, the streets, the cars and trucks, our crops and our food supplies—all this is still in place. And thus we can go on producing, and even producing profitably, because profit does not depend on the level of money prices at which we sell, but on the difference between the prices at which we sell and the prices at which we buy. In a deflation, both sets of prices drop, and as a consequence for profit production can go on.

There is only one fundamental change that deflation brings about. It radically modifies the structure of ownership. Firms financed per credits go bankrupt because at the lower level of prices they can no longer pay back the credits they had incurred without anticipating the deflation. Private households with mortgages and other considerable debts to pay back go bankrupt, because with the decline of money prices their monetary income declines too whereas their debts remain at the nominal level. The very attempt to liquidate assets to pay back debt entails a further reduction of the value of those assets, thus making it even more difficult for them to come even with their creditors. In the memorable words of Irving Fisher:
“The more the debtors pay, the more they owe.”

Yet from this correct observation, Fisher jumped to the fallacious statement that “the liquidation defeats itself.” Let us emphasize again that bankruptcies — irrespective of how many individuals are involved—do not
affect the real wealth of the nation, and in particular that they do not prevent the successful continuation of production. The point is that other people will run the firms and own the houses — people who at the time the deflation set in were out of debt and had cash in their hands to buy firms and real estate. These new owners can run the firms profitably at the much lower level of selling prices because they bought the stock, and will buy
other factors of production, at lower prices too.

In short, the true crux of deflation is that it does not hide the redistribution going hand in hand with changes in the quantity of money. It entails visible misery for many people, to the benefit of equally visible winners. This starkly contrasts with inflation, which creates anonymous winners at the expense of anonymous losers. Both deflation and inflation are, from the point of view we have so far espoused, zero-sum games. But inflation is a secret rip-off and thus the perfect vehicle for the exploitation of a population through its (false) elites, whereas deflation means open redistribution through bankruptcy according to the law.

It follows that there is no economic rationale for monetary policy to take up an ardent fight against deflation, rather than letting deflation run its course.
Either policy does not benefit the nation as a whole, but merely benefits a part of the nation at the expense of other groups. No civil servant can loyally serve all of his fellow-citizens through a hard-nosed stance against
deflation. And neither can he invoke the authority of economic science to buttress such a policy.