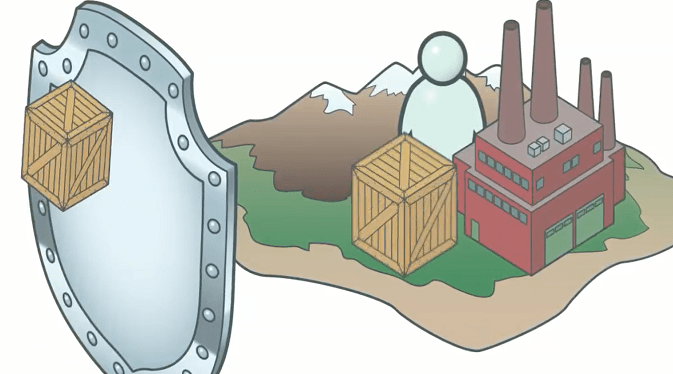 By Frédéric Bastiat [Included in The Bastiat Collection (2011), this article appeared in Economic Sophisms (1845).]

Among the arguments we hear adduced in favor of the restrictive regime we must not forget that which is founded on national independence.

“What should we do in case of war,” it is said, “if we are placed at the mercy of England for iron and coal?”

English monopolists do not fail to cry out in their turn:

“What would become of Great Britain in case of war if she is dependent on France for provisions?”

Note this: A nation isolates itself looking forward to the possibility of war; but is not this very act of isolating itself the beginning of war? It renders war more easy, less burdensome, and, it may be, less unpopular. Let countries be permanent markets for each other’s produce; let their reciprocal relations be such that they cannot be broken without inflicting on each other the double suffering of privation and a glut of commodities; and they will no longer stand in need of naval armaments, which ruin them, and overgrown armies, which crush them; the peace of the world will not then be compromised by the caprice of a Thiers or of a Palmerston; and war will disappear for want of what supports it, for want of resources, inducements, pretexts, and popular sympathy.

I am quite aware that I shall be reproached (it is the fashion of the day) with basing the fraternity of nations on men’s personal interest — vile, prosaic self-interest. Better far, it may be thought, that it should have had its basis in charity, in love, even in a little self-abnegation, and that, interfering somewhat with men’s material comforts, it should have had the merit of a generous sacrifice.

When shall we be done with these puerile declamations? When will hypocrisy be finally banished from science? When shall we cease to exhibit this nauseous contradiction between our professions and our practice? We hoot at and execrate personal interest; in other words, we denounce what is useful and good (for to say that all men are interested in anything is to say that the thing is good in itself), as if personal interest were not the necessary, eternal, and indestructible mainspring to which Providence has confided human perfectibility. Are we not represented as being all angels of disinterestedness? And does the thought never occur to those who say so that the public begins to see with disgust that this affected language disfigures the pages of those very writers who are most successful in filling their own pockets at the public expense? Oh! Affectation! Affectation! Thou are verily the besetting sin of our times!

What! Because material prosperity and peace are things correlative, because it has pleased God to establish this beautiful harmony in the moral world, am I not to admire, am I not to adore His ordinances, am I not to accept with gratitude laws that make justice the condition of happiness? You desire peace only in so far as it runs counter to material prosperity; and liberty is rejected because it does not impose sacrifices. If abnegation has indeed so many charms for you, why do you fail to practice it in private life? Society will be grateful to you, for someone, at least, will reap the fruit; but to desire to impose it upon mankind as a principle is the very height of absurdity, for the abnegation of all is the sacrifice of all, which is evil erected into a theory.

But, thank heaven, one can write or read many of these declamations without the world ceasing on that account to obey the social motive force, which leads us to shun evil and seek after good, and which, whether they like it or not, we must denominate personal interest.

After all, it is ironic enough to see sentiments of the most sublime self-denial invoked in support of spoliation itself. See to what this boasted disinterestedness tends! These men who are so fantastically delicate as not to desire peace itself, if it is founded on the vile interest of mankind, put their hand into the pockets of others, and especially of the poor.

For what article of the tariff protects the poor? Be pleased, gentlemen, to dispose of what belongs to yourselves as you think proper, but leave us the disposal of the fruit of our own toil, to use it or exchange it as we see best. Declaim on self-sacrifice as much as you choose, it is all very fine and very beautiful, but be at least consistent.