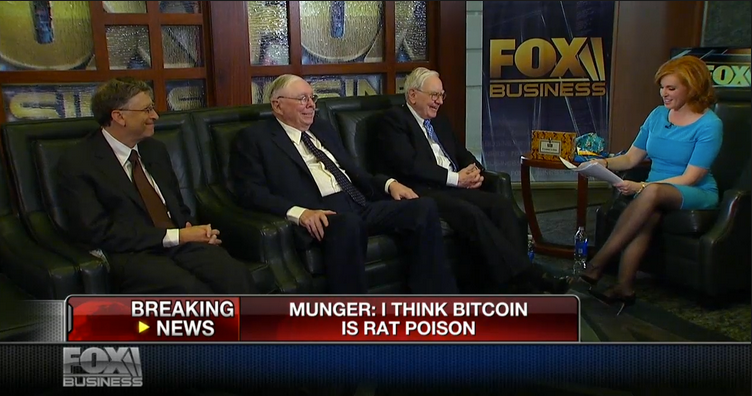 By Connor Mortell on Mises.org

Recently, Berkshire Hathaway vice chairman Charlie Munger spoke vehemently against bitcoin and other cryptocurrency, claiming, “I don’t welcome a currency that’s so useful to kidnappers and extortionists and so forth, nor do I like just shuffling out of your extra billions of billions of dollars to somebody who just invented a new financial product out of thin air.” This sentence, right off the bat, both summarizes his issues with cryptocurrency and contains the major flaws that make his criticisms wrong.

First and foremost is the obvious hypocrisy of the first half of that claim. The US dollar is almost equally useful to kidnappers and extortionists. “Satoshi Nakamoto” created bitcoin only as recently as 2009, and last I checked, kidnapping and extortion existed long before that. Arguments can be made on either side about bitcoin’s actual privacy. Realistically, the fact that it operates on an open source ledger makes it significantly less private than many believe it to be, especially when compared to other more privacy-targeted cryptocurrencies—most popularly monero. However, bitcoin not being as private as is sometimes assumed in and of itself does not inherently discredit Munger’s point, because it is still true that bitcoin can be and is used it in an increasingly private manner. He is correct that it is used by criminals. But while it is true that bitcoin’s privacy shortcomings don’t inherently discredit his claims, it is also true that bitcoin’s use by criminals does not inherently prove that it is worth condemning on those grounds. This is because it is just as common—if not overwhelmingly more common—for criminals to operate in cash. Munger is missing the vital lesson that Hazlitt so famously taught us: “The art of economics consists in looking not merely at the immediate but at the longer effects of any act or policy.” If Munger were to have his wish come true and the success of bitcoin failed because it was too useful to kidnappers and extortionists, he would be correct in that the immediate effect would be that kidnappers and extortionists would have to cease using cryptocurrency. But what is step two in that process? It is not that kidnapping and extortion would simply end. They would continue just as they always have, operating in cash. The only difference would be that now all the decentralizing benefits of crypto currency to the average person would also disappear.

Next, comes the simple but vital point that there is no greater kidnapper or extortionist than the federal government. I don’t have to explain to a Mises Wire reader that taxation is in and of itself extortion. As for kidnapping, the American criminal justice system holds almost 2.3 million people in prison. Of those imprisoned, 46.4 percent of inmates are in for largely victimless drug offenses. While many in agreement with the status quo can perform the necessary mental gymnastics to justify this, we can also turn to Rothbard’s For a New Liberty:

The distinctive feature of libertarians is that they coolly and uncompromisingly apply the general moral law to people acting in their roles as members of the State apparatus. Libertarians make no exceptions. For centuries, the State (or more strictly, individuals acting in their roles as “members of the government”) has cloaked its criminal activity in high sounding rhetoric…. In fact, if you wish to know how libertarians regard the State and any of its acts, simply think of the State as a criminal band, and all of the libertarian attitudes will logically fall into place.

The state as a criminal band raises two important issues with Munger’s point: first is that if he is to oppose a currency that is useful to extorters and kidnappers, then he must vehemently oppose the currency that is completely controlled and designed to benefit the largest of all violent criminal organizations. Next is that if Munger is correct to claim that bitcoin is useful to the criminals he named, then, reductio ad absurdum, it must also be true that it is useful also to those committing the victimless crimes that make up such a staggering amount of the US prison system. So even if Munger is correct in claiming this, it is not a foregone conclusion that the tradeoff is less aggressive and violent acts.

Additionally, Munger claimed that “nor do I like just shuffling out of your extra billions of billions of dollars to somebody who just invented a new financial product out of thin air.” But if anyone is to be considered the enemy based on such a sentence, it is not the average bitcoiner mining in his basement. It is the Federal Reserve. Munger is completely correct to find issue with the creation of wealth out of a new financial product being created out of thin air. To understand this we can turn to Richard Cantillon; for brevity’s sake, I’ll only quote the abstract of chapter 7 of An Essay on Economic Theory:

When there is an increase in the quantity of money, prices will increase depending on how the new money holders decide to spend their money. The price changes will also be affected by such things as regulations on trade and the perishability of the products that are traded. In other words the simple quantity theory of money is naïve in proposing that a doubling of the quantity of money would double all prices equally. Changes in the quantity of money will change relative prices and have real effects on the economy, a phenomenon now known as the Cantillon Effects.

Simply put, when there is an increase in the money supply, those who benefit most are those who first have access to it, as the money slowly loses value each step of the way as the effects of the inflationary policies hit. Presently, the banks are the first recipients of the new money, and the consumers are the ones who have value stolen. Munger is not completely wrong to point to bitcoin in its own way as a tool for such an effect. The major difference between the Federal Reserve and bitcoin is that for the first time in modern history, cryptocurrency offers these Cantillon effects in favor of the common man and at the expense of elites such as Munger, which I suspect is one of the most pressing reasons he is truly against cryptocurrency.

But the last piece that Munger gets mostly wrong is that he misunderstands his role. As George Selgin said in Less Than Zero “Economists should not smuggle ethical judgments into what purports to be a discussion of positive requirements for an efficient use of resources.” Bitcoin is a technology. Money in and of itself is a technology. It is true that these technologies may be used in negative ways. But it is also true that they may be used in positive ways. Cryptocurrency is an empty vessel, and for Munger to describe it as “disgusting and contrary to the interests of civilization” is for him to misunderstand his place as an economist.