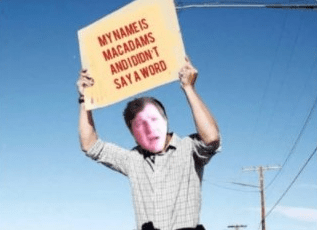 “Mr. McAdams, how does it feel to be the most famous man in the world?”

This is not how most of my press appearances begin and it is the concluding chapter of perhaps the strangest 24 hours of my life. But thus began my interview on India’s Times Now Television this morning as a follow up to one of the craziest and – even just 24 hours later – the most-watched moments of television history!

For those who haven’t seen it, I was invited for the first time to be a guest on one of India’s top English language television stations. I figured that since India’s a huge country and there must a good-sized audience, it might be a good opportunity to inform non-American viewers that there are perspectives on foreign policy here that, though widely-held, rarely get an airing on mainstream outlets.

What followed was an incredible comedy of errors that is less funny if it is explained. It can be viewed here.

In short, the producer had somehow mixed up my name and affiliation with that of a newspaper editor in Kiev, so that when the Ukrainian was calling for military attacks on Russia, the show host thought it was Daniel McAdams, director of the Ron Paul Institute for PEACE and Prosperity. He screamed at the other person who he thought was me to “take a bit of a chill pill.”

No comedy writer could have penned a more hilarious madcap back-and-forth, because this was purely authentic.

What followed was completely unexpected. Twitter users across India viewed and retweeted the video at this point almost 13 million times. For many hours “Mr. McAdams” was trending number one on Twitter India. Clever Indians made endless hilarious memes about the craze mix-up. For example:

The crazy escapade was picked up worldwide, including by BBC, Newsweek, Daily Mail, YahooNews, and many more outlets. Many have written and commented thanking me for injecting a bit of humor (unintentionally) into a particularly grim time in world affairs.

As for myself, I left the original interview fuming and furiously texting nastygrams to the show producer. The next morning I awoke to an in box full of messages from India telling me that the segment had taken off and was producing memes faster than gas prices were rising.

The demand to the original show and host to have me back to actually discuss foreign policy was great and, likely eager to capitalize on the fleeting fame of that segment, they had me back on the program today. I was introduced politely and perhaps contritely, and given plenty of time to make my case for a non-interventionist foreign policy.

Here is the meat of today’s lengthy interview as it appears as video clips on Twitter:

I am particularly pleased that the Indian military general on the panel – a man of obvious intelligence and capability – “completely endorsed” what I said in part two of my comments.

So why is my weekly update focused on this incident?

Number one, because life is weird. I will never again be “the most famous man in the world.”

Number two, and more seriously: as we are guided by Ron Paul’s experience in the two presidential elections, the key to all of this business is that you never know when you will get your audience. He talks to me most often about one of his great inspirations, the late Leonard Reed, and how Reed focused on perfecting his knowledge with an eye on effectively and competently promoting the message of liberty, peace, and prosperity.

Dr. Paul tells me this all the time as I am honored to join him every day on the Liberty Report.

There are plenty of charlatans out there who do very well for themselves pretending to spread the message of liberty, but far fewer actual teachers. Be a teacher.

So, he says: Read and study. Know the philosophy and know what you are talking about. It’s fine to be an activist, but be a knowledge-ist!

Because you never know the weird opportunities that may fall in your lap in these very strange times we are living in.

Because one day you may become the “most famous man in the world”…Ha ha!