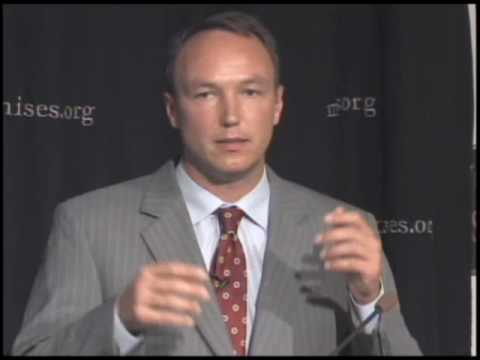 The harmful character of deflation is today one of the sacred dogmas of monetary policy. The champions of the fight against deflation usually present six arguments to make their case.

One, in their eyes it is a matter of historical experience that deflation has negative repercussions on aggregate production and, therefore, on the standard of living.

To explain this presumed historical record, they hold, two, that deflation incites the market participants to postpone buying because they speculate on ever lower prices.

Furthermore, they consider, three, that a declining price level makes it more difficult to service debts contracted at a higher price level in the past.

These difficulties threaten to entail, four, a crisis within the banking industry and thus a dramatic curtailment of credit.

Five, they claim that deflation in conjunction with “sticky prices” results in unemployment.

And finally, six, they consider that deflation might reduce nominal interest rates to
such an extent that a monetary policy of “cheap money,” to stimulate employment and production, would no longer be possible, because the interest rate cannot be decreased below zero.

First, in historical fact, deflation has had no clear negative impact on aggregate production. Long-term decreases of the price level did not systematically correlate with lower growth rates than those that prevailed in comparable periods and/or countries with increasing price levels. Even if we focus on deflationary shocks emanating from the financial system, empirical evidence does not seem to warrant the general claim that deflation impairs long-run growth.

Second, it is true that unexpectedly strong deflation can incite people to postpone purchase decisions. However, this does not by any sort of necessity slow down aggregate production. Notice that, in the presence of deflationary tendencies, purchase decisions in general, and consumption in particular, does not come to a halt. For one thing, human beings act under the “constraint of the stomach.” Even the most neurotic misers, who cherish saving a penny above anything else, must make a minimum of purchases just to survive the next day. And all others—that is, the great majority of the population—will by and large buy just as many consumers’ goods as they would have bought in a nondeflationary environment.

Even though they expect prices to decline ever further, they will buy goods and services at some point because they prefer enjoying these goods and services sooner rather than later
(economists call this “time preference”). In actual fact, then, consumption will slow down only marginally in a deflationary environment. And this marginal reduction of consumer spending, far from impairing aggregate production, will rather tend to increase it. The simple fact is that all resources that are not used for consumption are saved; that is, they are available for investment and thus help to extend production in those areas that previously were not profitable enough to warrant investment.

Third, it is correct that deflation—especially unanticipated deflation—makes it more difficult to service debts contracted at a higher price level in the past. In the case of a massive deflation shock, widespread bankruptcy might result.

Such consequences are certainly deplorable from the standpoint of the individual entrepreneurs and capitalists who own the firms, factories, and other productive assets when the deflationary shock hits. However, from the aggregate (social) point of view, it does not matter who controls the existing resources. What matters from this overall point of view is that resources remain intact and be used. Now the important point is that deflation does not destroy these resources physically. It merely diminishes their monetary value, which is why their present owners go bankrupt. Thus deflation by and large boils down to a redistribution of productive assets from old owners to new owners. The net impact on production is likely to be zero.

Fourth, it is true that deflation more or less directly threatens the banking industry, because deflation makes it more difficult for bank customers to repay their debts and because widespread business failures are likely to have a direct negative impact on the liquidity of banks. However, for the same reasons that we just discussed, while this might be devastating for some banks, it is not so for society as a whole.

The crucial point is that bank credit does not create resources; it channels existing resources into other businesses than those which would have used them if these credits had not existed. It follows that a curtailment of bank credit does not destroy any resources; it simply entails a different employment of human beings and of the available land, factories, streets, and so on.

In the past eighty years, the sticky-prices argument has played an important role in monetary debates. According to this argument, the manipulation of the money supply might be a suitable instrument to re-establish a lost equilibrium on certain markets, most notably on the labor market. Suppose that powerful labor unions push up nominal wage rates in all industries to such an extent that entrepreneurs can no longer profitably employ a great part of the workforce at these wages. The result is mass unemployment. But if it were possible to substantially increase the money supply, then the selling prices of the entrepreneurs might rise enough to allow for the reintegration of the unemployed workers into the division of labor. Now, the argument goes, under a gold or silver standard, this kind of policy is impossible for purely technical reasons because the money supply is inflexible. Only a paper money provides the technical wherewithal to implement pro employment policies. Thus we have here a prima facie justification for suppressing the natural commodity monies and supporting a paper money standard.

This argument grew into prominence during the 1920s in Austria, Germany, the United Kingdom, and other countries. After World War II, it became something like a dogma of economic policy. But this does not alter the fact that it is sheer fallacy, and it is not even difficult to see the root of the fallacy.

The argument is in fact premised on the notion that monetary policy makers can constantly outsmart the labor unions. The managers of the printing press can again and again surprise the labor-union leaders through another round of expansionist monetary policy. Clearly, this is a silly assumption and in retrospect it is very astonishing that responsible men could ever have taken it seriously. The labor unions were not fooled.
Faced with the reality of expansionist monetary policy, they eventually increased their wage demands to compensate for the declining purchasing power of money. The result was stagflation—high unemployment plus inflation—a phenomenon that in the past thirty years has come to plague countries with strong labor unions such as France and Germany.

ILR : Because of the length of the discussion on this subject, it will be published in a separate article. This page will be updated at the time with the link. Subscribe to our updates to not miss future articles :

Deflation certainly has much disruptive potential. However, as will become even more obvious in the following chapters, [deflation] mainly threatens institutions that are responsible for inflationary increases of the money supply. It reduces the wealth of fractional-reserve banks, and their customers— debt-ridden governments, entrepreneurs, and consumers. But as we have argued, such destruction liberates the underlying physical resources for new employment. The destruction entailed by deflation is therefore often “creative destruction” in the Schumpeterian sense.