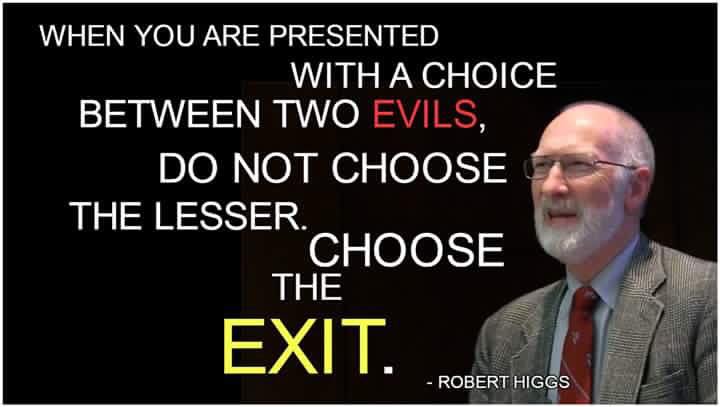 Many lovers of liberty tend to get frustrated by the regular advances of the State in their lives. They become sour and sometimes, they simply give up.

This is not the path dictated by the great philosophers. The Bhagwad Gita tells is to keep acting in the right manner, regardless of the consequences. Similarly, the great Austrian economist, Ludwig von Mises, lived through the horrors of the 20th century keeping a single motto in mind : Tu ne cede malis, sed contra audentior ito. Translated into English, this Latin maxim means ‘Do not give in to evil but proceed ever more boldly against it‘ :

How one carries on in the face of unavoidable catastrophe is a matter of temperament. In high school, as was custom, I had chosen a verse by Virgil to be my motto: Tu ne cede malis sed contra audentior ito. Do not give in to evil, but proceed ever more boldly against it. I recalled these words during the darkest hours of the war. Again and again I had met with situations from which rational deliberation found no means of escape; but then the unexpected intervened, and with it came salvation.

In our modern society, the fight against evil has found another, beautiful method of battle : it’s called the exit.

Several paths are offered to free men to achieve this. Here’s a few that we can think of without having to scratch our heads. Feel free to leave your suggestions in the comments.

This is not financial advice, but a simple glance at the price of gold shows that it remains a solid store of value, out of the hands of the banks and the government. While investing in stocks might have worked out for those who know what they are doing, few, if any, regular Rams have managed to beat this by playing those games in the stock market :

Gold, when personally held, has the added advantage of being free of counterparty risk. That is, you don’t need to worry about your bank of your heavily leveraged corporation taking a hit and loosing all your money on your behalf.

More adventurous types can also look into bitcoin, which has obviously outperformed all other asset classes in the 10 years of its existence.

That being said, this one is harder than the earlier one. The surveillance state is omnipotent, but here’s a few tips and tricks that will go a long way :

Cash, despite Mr. Modi’s aversion to it, remains one of the most private forms of exchange in the world. Don’t be afraid of it and use it as much as possible. That’s how you beat the banking and credit card surveillance.

We will be writing about this in greater detail, but here’s a few starting points :

Of course, try and use a VPN for what it’s worth, and don’t be afraid of Tor.

A little bit of effort would go a long way if you could throw Microsoft in the dustbin and switch to Linux. There’s always one type of Linux that’s really made for you, just like your spouse or lover.

Read the original texts. Read the old scholars. Make your own mind up on these matters.

Become a founder of your own religion.

Talk to your chartered accountant or get one if you don’t have one yet. There’s many ways of doing this, trust us. Organizing your business and personal affairs to be as tax efficient as possible. If the politicians and crony corporations can do it, so can you.

Other forms of exit

Exit the welfare state : Become as self-sufficient as possible with regard to food, water, fuel, cash, and physical security. Make sure you don’t rely on government in the event of natural disasters and other crises.

Also, take good care of your own health and stop listening to fake sadhus on nutrition. Follow the real science.

Exit the mainstream media : Follow the Indian Liberty Report (lol). Talk and learn about current events from friends, family, and neighbors — whether physically or virtually. Use the internet, there’s a wealth of good information out there.

Exit the failed education system: Reject it and educate yourself using online learning platforms, obtaining technical credentials, or simply by reading as much as you can. Your employer really doesn’t care about your stupid degree. He only wants to get the job done.

Most importantly, to quote the great Jeff Deist :

(…) secede from the mindset that government is all-powerful or too formidable an opponent to be overcome. The state is nothing more than Bastiat’s great fiction, or Murray’s gang of thieves writ large. Let’s not give it the power to make us unhappy or pessimistic.

Readers may enjoy this publication for further inspiration.