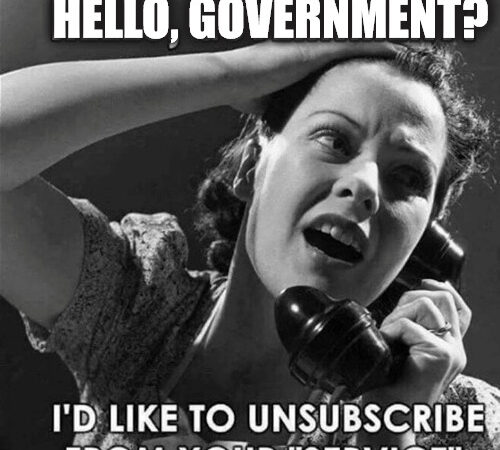 Extract of Laurent Benichou’s ‘Bitcoin, A Gift to the Environment’ (see original for footnotes)

Bitcoin reduces ‘State footprint’, which is crucial for our childrens’ economic environment

a. A Bitcoin-based monetary system would keep States streamlined

Zero interest rates do not incentivize States to reform themselves and reduce their footprint on the rest of the economy. On the contrary, they attract more and more people and funds that should normally be used by the productive side of the economy. The very elementary truth that all capital expenditures imply opportunity cost in the form of foregone opportunities must be stressed here: any public expenditure necessarily comes at the cost of less resources for the private sector.

This is precisely what General Vauban mentions in his book La Dixme Royale, written for King Louis XIV at the end of the 17th Century: “It is therefore demonstrated that not only is this royal dime sufficient to provide the royal fund with adequate proceeds but could also replace other taxes that bring more damage than profit to the State and that are only good to make a few supporters richer and feed a bunch of lazy people and vagabonds that could be used elsewhere. (…) The French will work with more strength and courage when they realize that they are able to keep for themselves the main part of their profit”.

What’s more, under crises like COVID, State officials are financially able (thanks to central bank support) to take decisions that cripple the economy even more. Budget deficit finances indemnities related to administrative shop closing decisions, over-complexified vaccination processes as well as the broad economic impact of freedom restrictions (curfew, confinement…). Those decisions increase (through both the numerator and the denominator) the State debt/GDP ratio and consequently the long-term burden on taxpayers. Ultimately, excessive money issuance means a risk of asset bubbling, potentially followed by hyperinflation and bank runs.

On the contrary, a Bitcoin-based monetary system would not allow States to dedicate more resources to a situation than States finances allow. This is a market guarantee that no government is able to sacrifice tomorrow for the benefit of today. And indeed, mortgaging the resources of generations yet to come for the benefits of present voters can be interpreted as a direct violation of our democratic principles.

b. An uncensorable monetary system forces States to care about taxes’ social acceptance

With the rising importance of digital payments, careless State officials may have the feeling that they can fully control the monetary system and impose surveillance throughout the whole economy. This is a social problem for the future of our societies and personal freedom: governments may think they don’t need to care any longer about tax acceptance, as they have the means to impose taxes, and even automate their payments through forced haircuts directly from citizens bank accounts.

Even in non-totalitarian countries, this ultimately leads to social uprises, as experimented in France lately under the yellow-jacket movement. There is no backdoor for States in Bitcoin, therefore States have to take into account the taxpayer’s point of view when issuing a new tax or increasing a tax rate: is it socially acceptable? What kind of service does the State provide in return for tax payment? Is there a largely accepted consensus for the State spending financed by the tax?…

Initiatives to remove cash and fight black markets have been carried out by States lately. The most striking example is the Nov-16 decision of the Indian Prime Minister to remove large bank notes from the market in order to fight black markets. Although it did not reach this goal (99.3% of bank notes found their way back to banks), the decision severely hit the informal economy, largely based on cash transactions. 1.5 million jobs were lost in the 6 months following the decision and the labor force participation rate shrank from 46.1% to 43.5%, hitting mostly young workers between 15 and 24. No impact was found on tax collection either.

The argument that Bitcoin facilitates crime is a dubious one as it ignores the relative opacity of the fiat system when compared to Bitcoin. As numerous cases of money-laundering and tax-evasion have demonstrated, avoiding State scrutiny by recourse to such tools as shell corporations, off-shore banking system etc… is rather easy. The FinCEN files put forward a record number of $2tn of alleged money laundered through some respectable institutions of the traditional banking system. By the way, those banks may not even have been actively responsible and may just have been fooled by malicious actors that literally cash in on the technical complexity of traditional banking pipes. In order to overcome the flaws of ancient technology and systems, traditional banks need to come up with loads of compliance mechanisms and teams.

On the other hand, it may well be the case that, since all transactions are publicly recorded on the Blockchain, a Bitcoin Standard will allow for less criminal activities, as suggested by crypto journalist Grégory Raymond: a report by Chainalysis indeed computed that criminal activities accounted for 0.34% of cryptocurrency transactions in 2020. This compares well with the estimate of 2-5% of global GDP laundered each year in the current banking system.

Bitcoin is Uncensorable value: not only does it prevent governing bodies from disrupting a free economy but it protects citizens in their property rights and personal freedom. It therefore seems like a relevant improvement proposal to our current monetary system… and a good option to save the economic environment of our children.